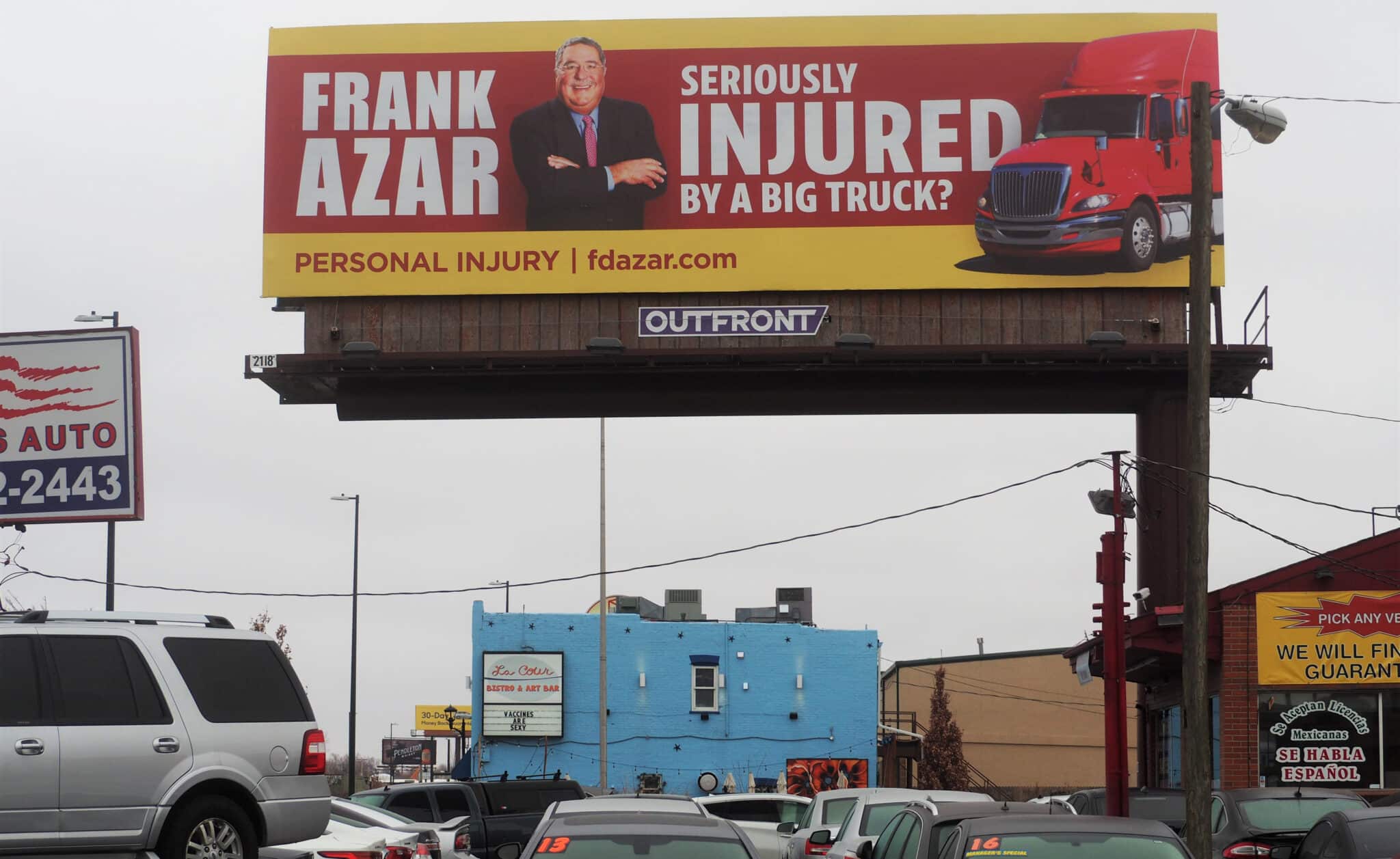 A Frank Azar billboard looms over a used car lot along South Broadway in Denver on Wednesday. (Thomas Gounley photo)

The Strong Arm is taking a swing at two of his former accountants.

Azar initially told the IRS he owed $786 in federal personal income tax, according to the court documents, but the agency believes he owes an additional $700,000.

“Mr. Azar is currently working with IRS counsel to determine his correct tax liability for taxable year 2017 and resolve the proposed deficiencies,” one of Azar’s lawsuits reads.

Azar, his attorney and defendants named in the lawsuits did not respond to separate requests for comment this week.

Azar founded Franklin D. Azar & Associates in 1987, according to the firm’s website. His firm now has multiple local offices, and is most known for representing car crash victims. Azar’s face and his “Strong Arm” nickname graces billboards and local TV ads.

Azar says in that lawsuit that he initially hired McKey in late 2017 to analyze his law firm’s business practices. Azar subsequently agreed to hire McKey to handle all of his accounting and tax preparation needs, including Azar’s individual income tax returns for 2017, according to the lawsuit.

McKey, operating on behalf of Azar, submitted the return stating that Azar owed $786 in taxes, according to the lawsuit.

In December 2019, according to the lawsuit, the IRS notified Azar of “proposed changes” to the return.

Azar’s lawsuit accuses McKey of breach of fiduciary duty and professional negligence, among other things.

“While skilled in legal matters relating to personal injury and class action suits, Frank Azar is not skilled, educated, or experienced in accounting and tax matters and relied solely on Mr. McKey and the Vista Consulting Group for all of his business and personal accounting and tax compliance needs,” the lawsuit states.

In his lawsuit against McKey, Azar says that after hearing from the IRS, he hired Michael W. Sidon of Mayer Hoffman McCann to “review the returns prepared by Mr. McKey and prepare amended returns, if needed.” Sidon found “substantial errors,” the document states.

But Azar alleges Sidon failed to take other critical steps. The IRS’ letter about “proposed changes” to Azar’s return stated that Azar needed to reply within a month if he disagreed with the IRS’ calculations, or to call if he needed more time to respond.

Sidon, however, did not do so, and he told Azar to mail his amended return to the wrong address, according to the lawsuit.

Azar also alleges that Sidon failed to advise him on other important details, such as “the procedures needed to be taken for the IRS to treat a remittance as a deposit.”

Sidon and his colleague Christopher Steedly again failed to take the proper steps in response to the second notice, Azar alleges. Steedly is also a defendant in the second lawsuit, along with Kansas City-based Mayer Hoffman McMann and the related CBIZ MHM LLC.

The second lawsuit also accuses the defendants of breach of fiduciary duty and professional negligence, as well as other counts.

Both lawsuits seek an unspecified amount of damages. Azar is represented by Lakewood attorney Charles Kersch.

A Frank Azar billboard looms over a used car lot along South Broadway in Denver on Wednesday. (Thomas Gounley photo)