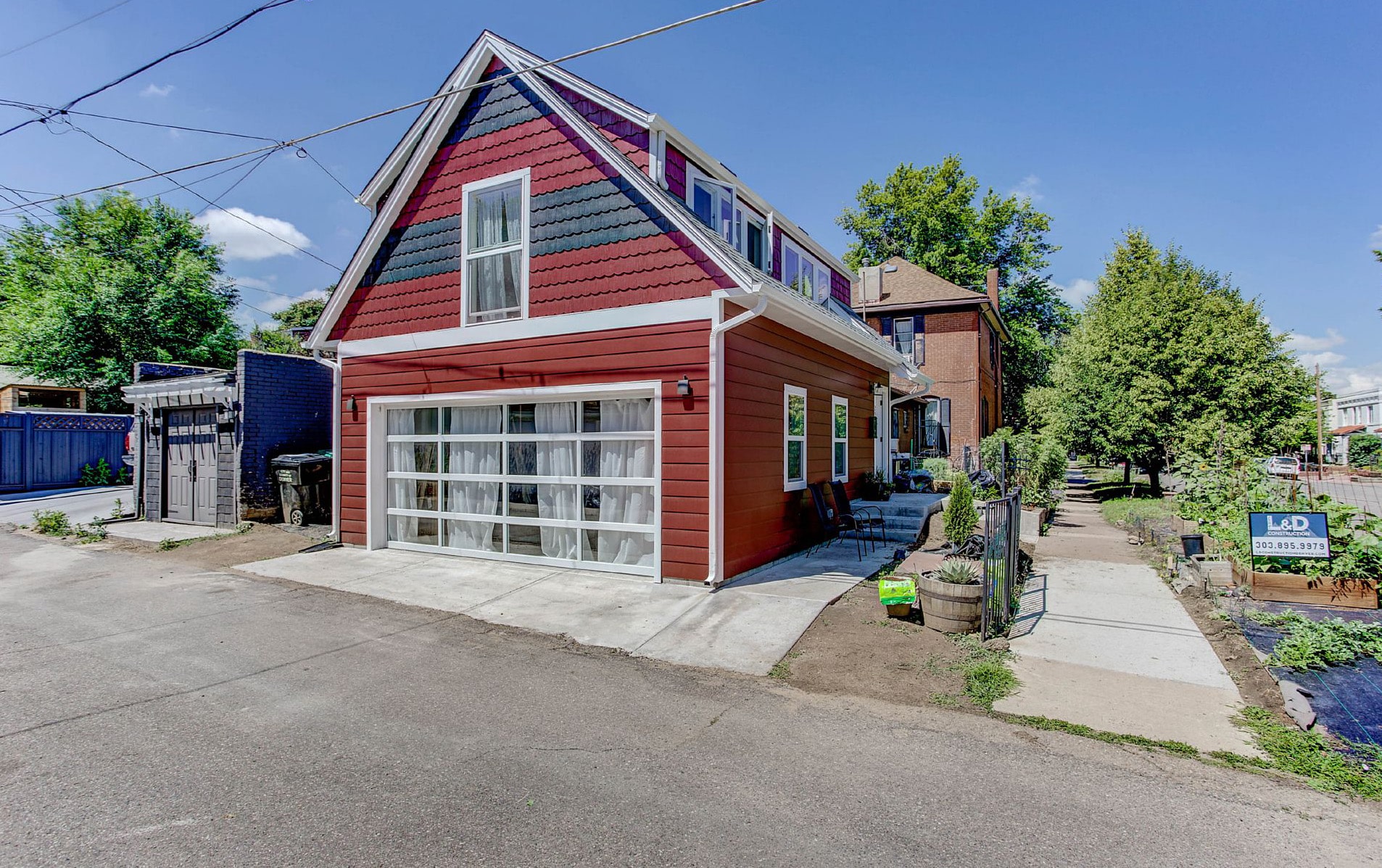 Denver is in the process of rezoning the West Highland, Regis, Barnum, Barnum West and Villa Park neighborhoods to allow for accessory dwelling units. Shown is an ADU that was constructed in 2018 at 2558 N. Marion St. (Courtesy of L&D Construction)

Five more Denver neighborhoods are in line to potentially be rezoned to allow for accessory dwelling units.

Councilwoman Amanda Sandoval started the process in December for the Regis neighborhood, and earlier this month for West Highland.

And Councilwoman Jamie Torres is trying to get the same kind of zoning for the neighborhoods of Villa Park, Barnum and Barnum West. Torres filed for the zoning in October, so those neighborhoods are further along in the process. 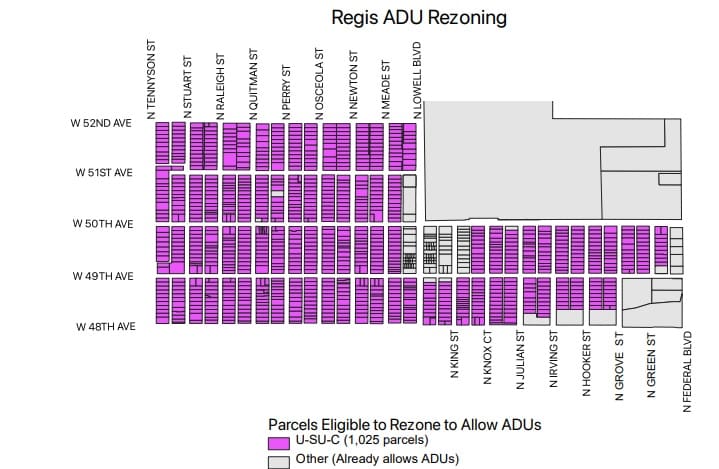 This map shows the potential ADU rezoning in Regis. (Maps courtesy of the city of Denver)

If ultimately approved, the five neighborhoods would join Chaffee Park, Sloan’s Lake and most recently East Colfax, which were rezoned in the last two years.

ADUs are smaller, secondary dwelling units built on a property where there’s already a residence. They’re often built up against the alley.

It’s already been possible to build an ADU in the above neighborhoods but, to do so, homeowners have had to ask the city to rezone their specific property. 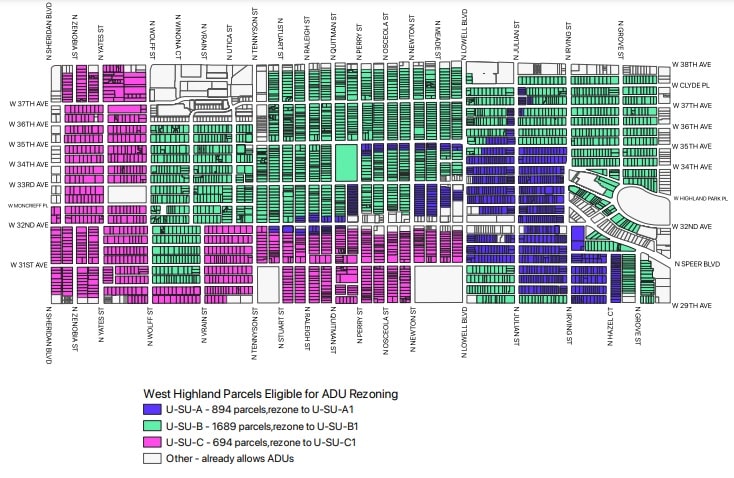 This map shows the potential ADU rezoning in West Highland.

Sandoval said the mass rezoning would relieve potential ADU builders of $1,000 in fees associated with that process.

“It’s a really long process and the zoning is just one barrier, but the actual development and building one is a whole other barrier,” she said. “My goal is if someone wants to build an ADU, they should spend that toward the process and not the entitlement. That’s why I’m doing it this way through the legislative process.” 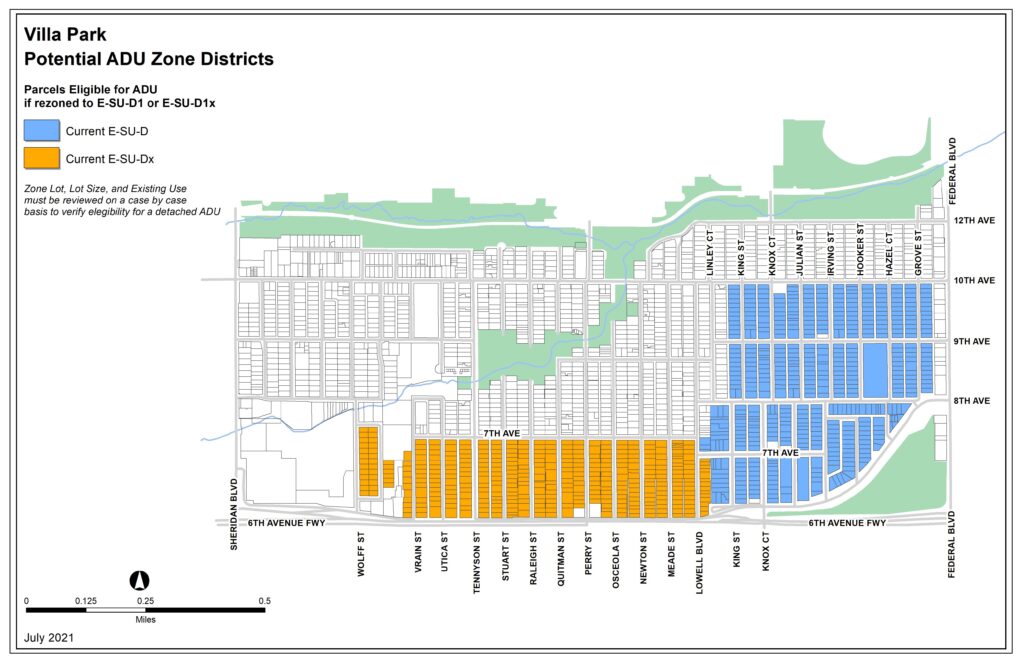 This map shows the potential ADU rezoning in Villa Park.

“I’m also hoping by having them throughout, not everywhere in District 1 but the majority, it creates an equal playing field for everyone,” Sandoval said.

ADUs cannot be sold separately from the main residential property, as they are an “accessory” to the home, according to Laura Swartz, a spokeswoman for the city’s Department of Community Planning. But they can be rented on a long or short-term basis.

Sandoval said she’s still doing outreach in Regis and West Highland, so a timeline hasn’t been set for a possible vote on the changes by the Denver City Council. 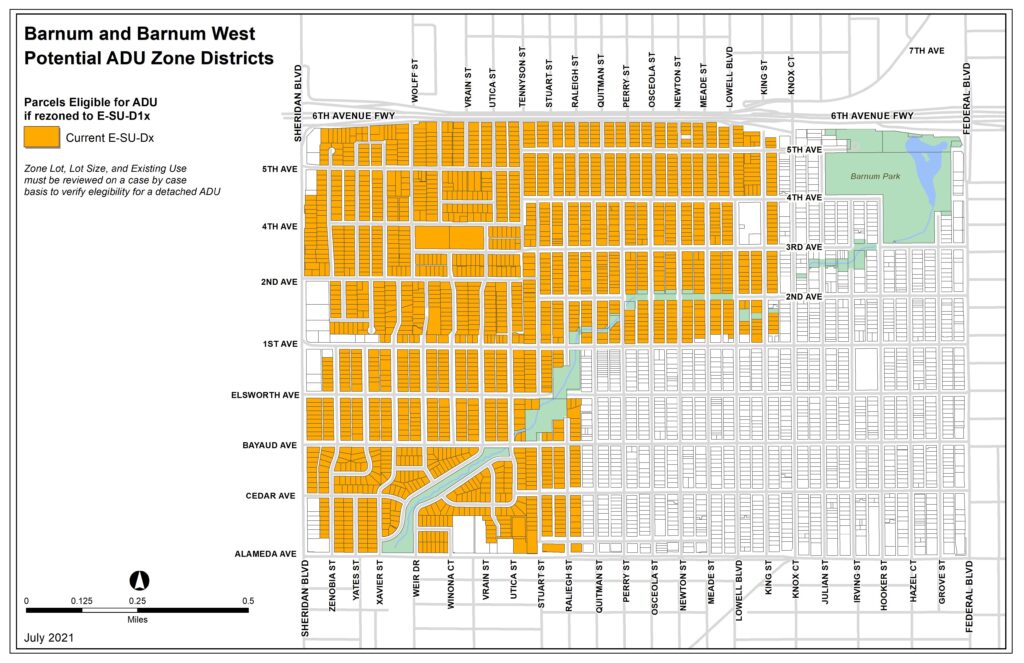 This map shows the potential ADU rezoning in Barnum and Barnum West.

Torres told BusinessDen the plans for Villa Park, Barnum and Barnum West are slated to go before the city’s Planning Board in mid-March, and the council in April.

Data obtained by BusinessDen from the city’s Department of Community Planning shows four ADU permits have been issued to residences in the Sloan’s Lake neighborhood since August 2021, when the neighborhood was rezoned. Chaffee Park, which was rezoned in November 2020, has had no permits issued for ADUs since 2018.

Denver is in the process of rezoning the West Highland, Regis, Barnum, Barnum West and Villa Park neighborhoods to allow for accessory dwelling units. Shown is an ADU that was constructed in 2018 at 2558 N. Marion St. (Courtesy of L&D Construction)