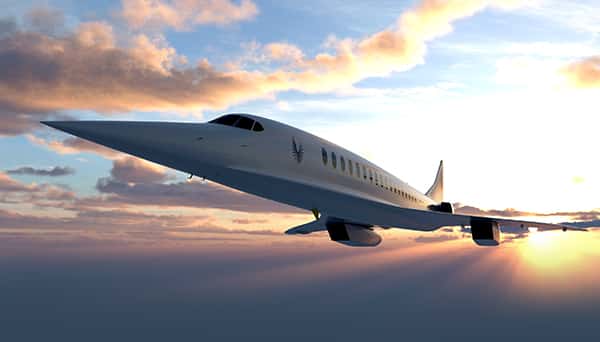 The company, whose official name is Boom Technology, signed a lease for the 287,000-square-foot structure at 6801-6803 S. Tucson Way at the end of December, according to sources familiar with the deal.

That’s equivalent to about 12 floors of the Wells Fargo Center in downtown Denver.

Boom did not respond to multiple requests for comment last week. After BusinessDen published an initial version of this story Friday afternoon, a company spokeswoman said in an email that Boom will not occupy the entire space initially.

Cushman & Wakefield broker Steve Billigmeier, who represented the company, declined to comment on the deal.

Boom currently operates out of a smaller building right next to Centennial Airport, about a two-mile drive from the Tucson Way building, which was previously occupied and owned by investment management firm Invesco.

Boom, founded in 2014, is developing a supersonic jet it calls the Boom Overture. In a May news release, the company said it plans to break ground on a manufacturing facility in 2022, begin production in 2023 and roll out a completed aircraft in 2025. The goal is to have the jets ready to carry passengers by 2029.

In June, United Airlines said it had agreed to buy 15 of the jets, provided they ultimately meet the company’s standards, and that the company had an option to buy an additional 35.

Boom — which is led by founder and CEO Blake Scholl — has said the jet will be able to fly at Mach 1.7, about twice as fast as conventional airliners. That would translate into 3.5 hour flights from Newark to London, and six hour flights from San Francisco to Tokyo, according to United.

The company has raised $270 million from investors, according to the Wall Street Journal. The last commercial supersonic flight took place in 2003.

In addition to being leased by Boom, the Tucson Way building also sold in late December. An entity affiliated with Glendale-based Westside Investment Partners paid $21.5 million for the property, records show.

It was sold by Invesco, which took control of it as part of its 2019 acquisition of OppenheimerFunds, records indicate.

Boom Supersonic plans to break ground on a manufacturing facility in 2022, begin production in 2023 and roll out a completed aircraft in 2025.