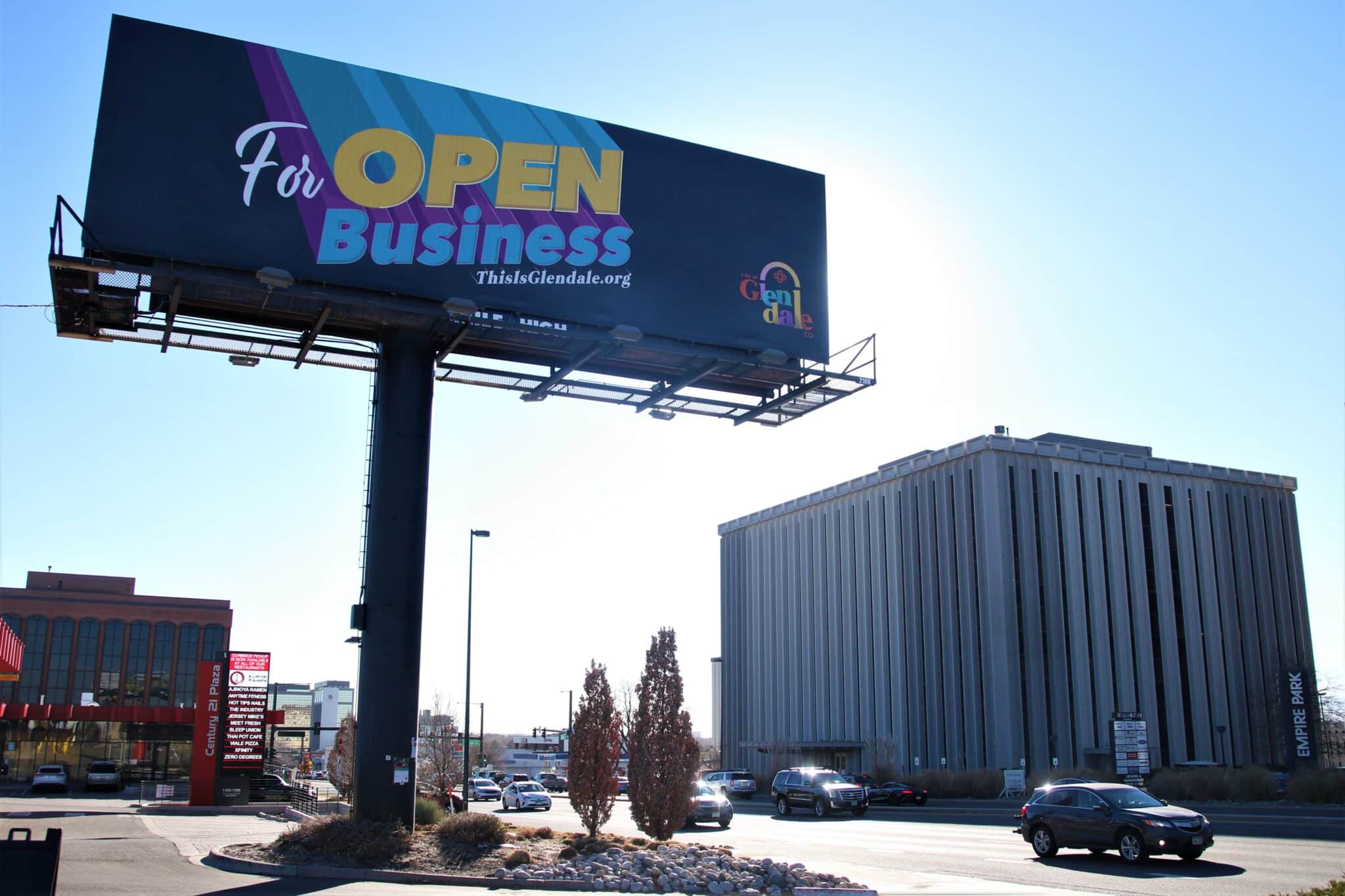 Glendale, a 369-acre city located along South Colorado Boulevard, highlights some of its “quirky” features in a new promotional campaign. (Eric Heinz photos)

The city of Glendale wants to be known as more than a short stretch of Colorado Boulevard with the Target.

To celebrate its 69th anniversary, the municipality surrounded by the city of Denver has launched a new advertising campaign that markets it as a place that embraces “freeeeedom and liberty,” keeps bars open until 4 a.m. and supports year-round rugby matches.

City Manager Linda Cassaday told BusinessDen that Glendale wants the campaign to show that the city is a “defender of common sense” regulations.

“What we’re trying to do is just really come up with a clever promotional campaign for Glendale,” Cassaday said. “We’re going to take a little different approach rather than applying to be named America’s best city.”

Billboards and banners started going up around the Fourth of July, noting that Glendale is not part of Denver — nor is it the cities of the same name in Arizona or California, both of which rank higher in a Google search.

Glendale has about 5,000 residents, and dedicated $250,000 to the campaign, which will continue into 2022, according to Cassaday. The city hired Stoic Agency, an advertising agency in Fort Collins.

Nick Stringari, the firm’s managing director and co-founder, said the city “wanted us to put them on the map and change the perception people may have about Glendale.”

“We started to play with the creative side and used the Libertarian views in the theme, ‘defenders of common sense,’ and there’s a couple other things,” Stingari said. 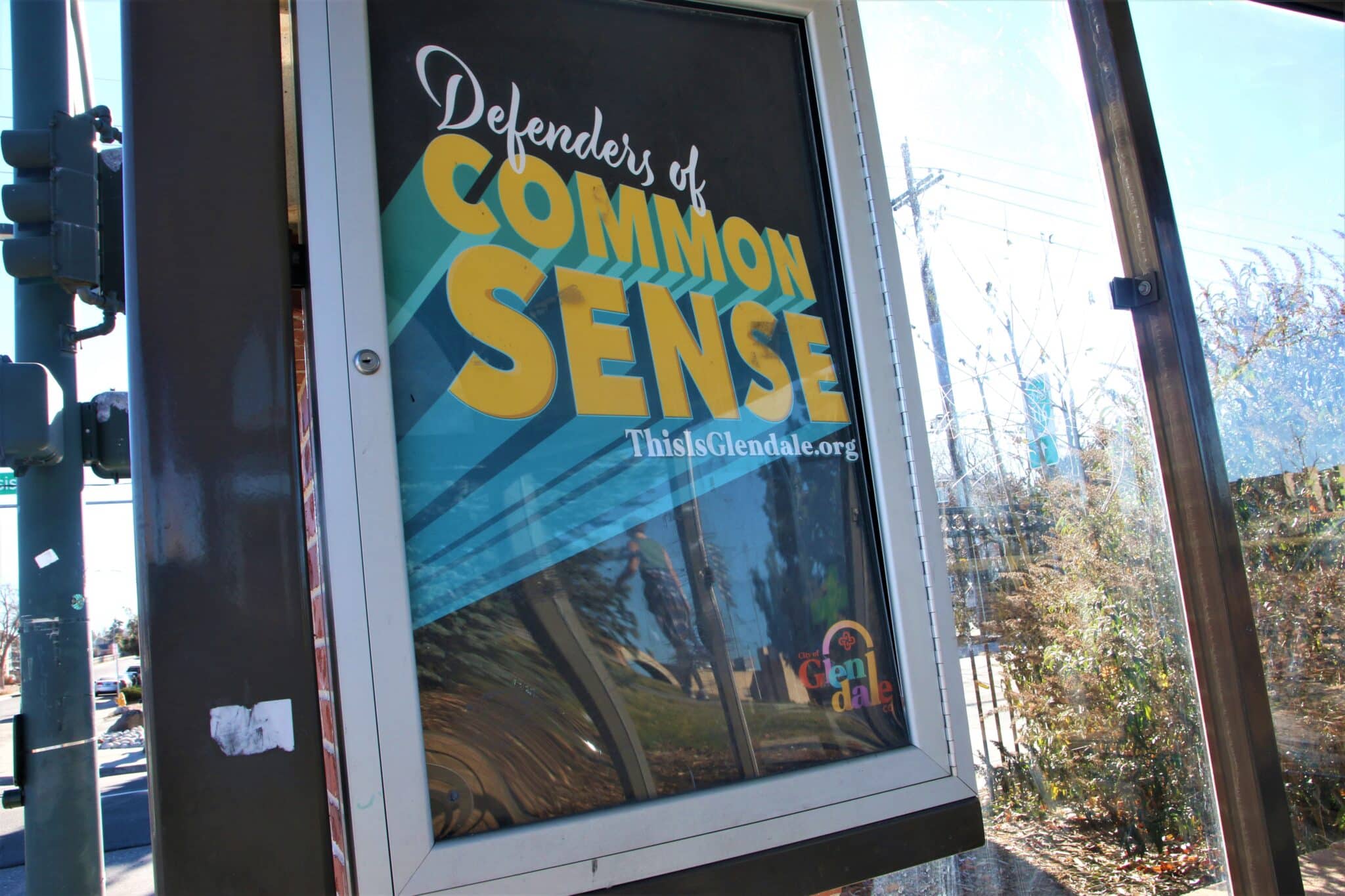 A new promotional poster for the city of Glendale at a bus stop reads “Defenders of Common Sense.”

Glendale’s City Council and its mayor are elected on a nonpartisan basis. Mayor Mike Dunafon, whose wife Deborah is the majority owner of strip club Shotgun Willie’s, describes himself as a libertarian, although he ran for governor in 2014 as an unaffiliated candidate.

The city proclaims that everyone has a voice. That small business owners are our heroes. That sweatpants and hoodies are a fashion statement.

“If you spend time here, at about 5:30 p.m. you will see a ton of people down at the park to walk their dogs, and sweatpants and hoodies are the outfit,” Cassaday said.

Glendale lists its favorite food as “anything BUT vegan, gluten-free, organic, low-fat, no-carb, fat-free, sugar-free and soy.” But the website also says that, when not working, residents go on “organic pizza runs to Whole Foods.”

The fully vegan restaurant chain Native Foods has had a location in Glendale for a decade.

“While we’re surprised that the city of Glendale has chosen this angle for their campaign, we got a good chuckle,” Native Foods CEO Carin Stutz told BusinessDen by email. “We know that Glendale folks love our plant-based food and we know that they have a great sense of humor as well.”

Cassaday said the campaign is not designed to be 100 percent representative of all the city’s aspects, rather it’s a “tongue-in-cheek manifesto” that shows the “unique and quirky” side of Glendale.

The campaign also promotes the city’s police department as an enforcement arm that is “more like a friendly concierge service that wants to be your friend,” so long as you “keep it cool, dude.” 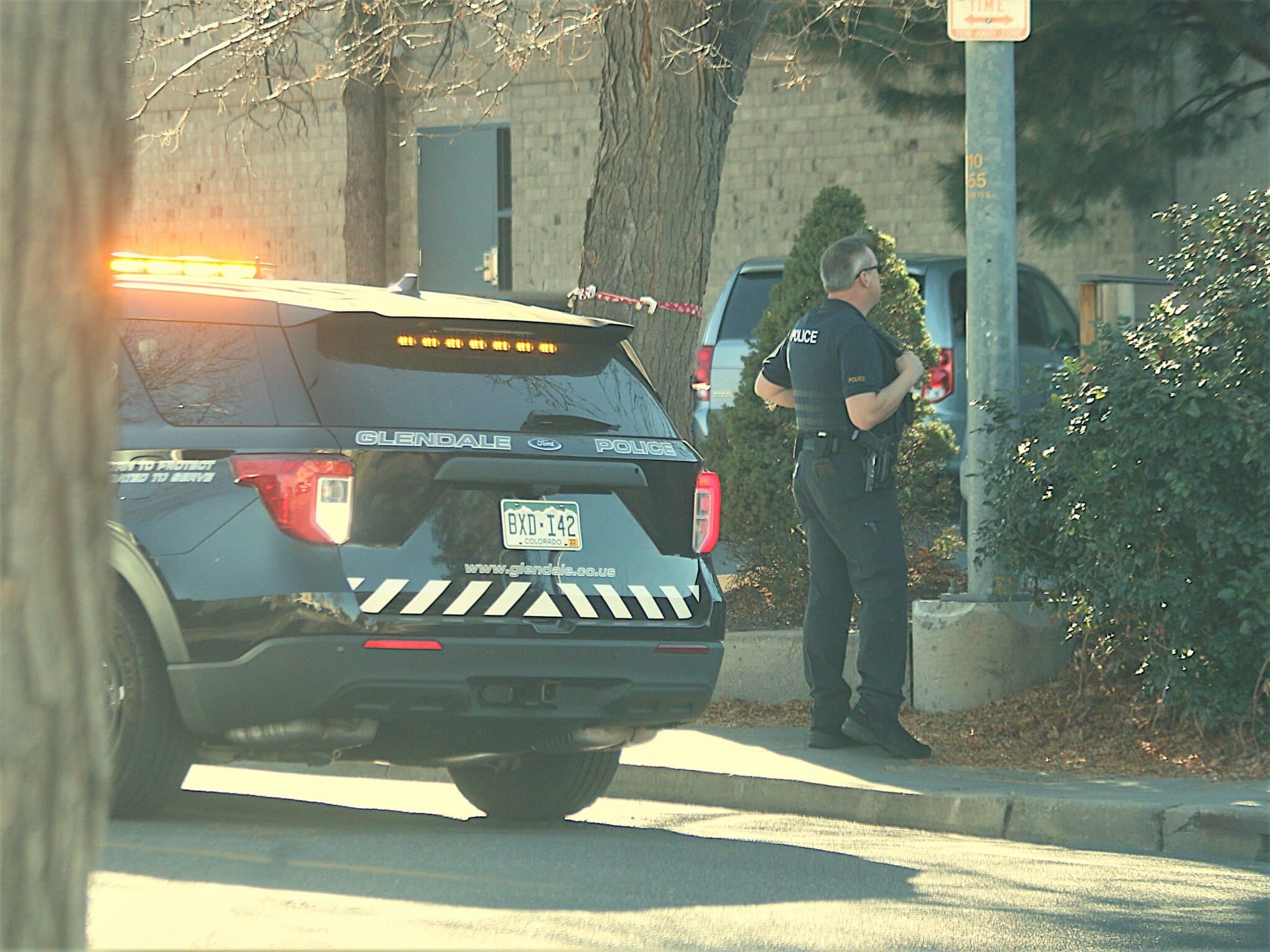 A Glendale police officer patrols the area near a residential complex on Thursday along the 900 block of South Birch Street, across from City Hall.

The “concierge” wording refers to a method of policing minor crimes the city decided to adopt a few years ago, according to the Glendale Chamber of Commerce Chief Operating Officer Jeff Allen.

“A person can get a ticket in Glendale, but they really gotta want it bad,” Allen said, adding that before the change officers were handing out thousands of tickets a year.

In recent years, the city has reduced that to a couple hundred — issuing warnings for minor offenses instead, Allen said.

Allen said although the chamber was not involved with the campaign, board members were overall very pleased with how it turned out, adding that the city tried to rebrand itself a few years ago as not just a place with a topless nightclub.

He said the chamber also wants Glendale to have a lasting impact on visitors, particularly developers and companies looking to move outside the state’s capital city.

“We want them to think about Glendale when they leave,” Allen said. 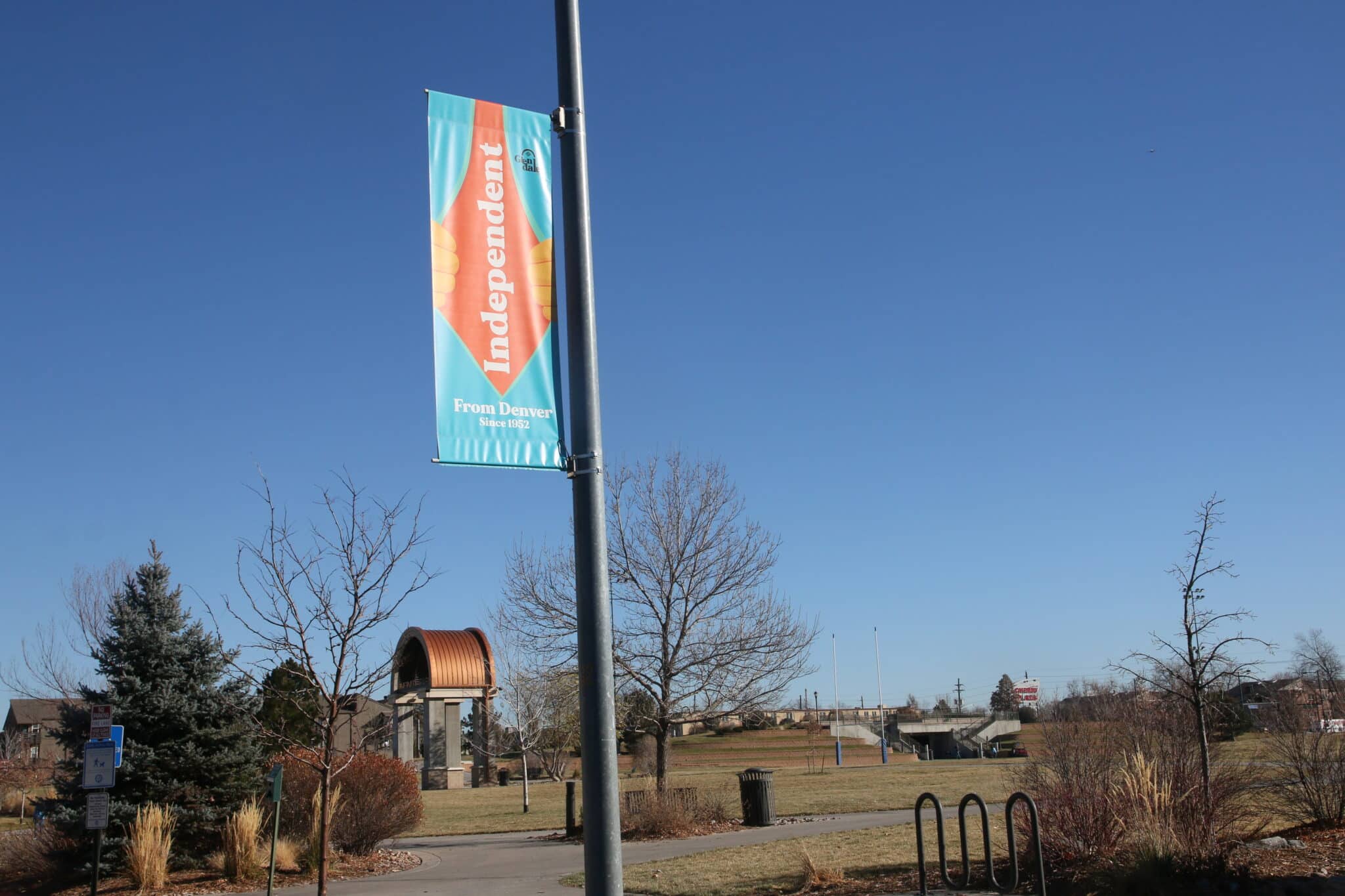 This sign reads “Independent from Denver since 1952” as part of a promotional campaign for the city. Denver never actually annexed Glendale.

Allen said he is glad the campaign promotes Glendale’s options for active lifestyles. The city believes “sports are a way of life,” according to the manifesto.

Glendale, which calls itself “Rugby Town USA,” has multiple ruby fields and the 4,000-seat Infinity Park Rugby Stadium that once hosted a major league team. It still hosts international matches, like the U.S. vs. Canada women’s match in early November.

And what about “Freeeeedom,” the clarion call that’s stretched across the website’s dancing cowboy hat?

In 2013, the city declared a “Year of Freedom,” and city leaders removed multiple old laws, such as prohibitions against throwing a rock at a bush, and having pool tables at a bar. A tavern owner was filmed being “arrested” for violating the latter right before the law was repealed.

Before Glendale was Glendale, it was an unincorporated area within Arapahoe County. According to the campaign website, the city was formed in 1952 because it was afraid of being annexed by Denver and the “loss of independence.”

But Glendale still gets its water through Denver Water, as other surrounding municipalities do.

Cassaday said highlighting the city’s 70th anniversary next year would have been “just too normal.”

“We think 69 is way cooler,” the campaign website says.

Glendale, a 369-acre city located along South Colorado Boulevard, highlights some of its “quirky” features in a new promotional campaign. (Eric Heinz photos)

Rugby is a way of life. Sweatpants and hoodies are stylish. No to organic food, unless it’s pizza. Concierge cops. Welcome to Glendale.