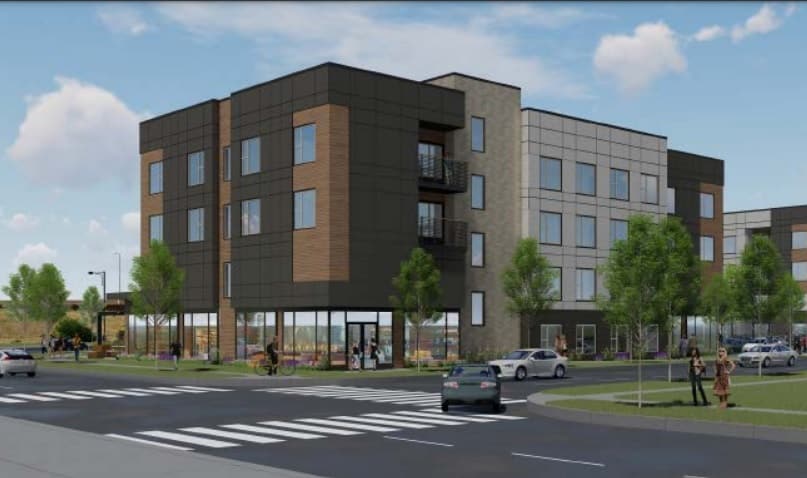 A rendering shows the proposed design of the Northfield Flats, a planned 128-unit residential complex at 4501 N. Xenia St. that is expected to break ground in the spring. (Courtesy of the city of Denver)

A 128-unit apartment complex could be coming to the Northfield section of the Central Park neighborhood next year, with units to be leased to people making 30 percent to 80 percent of the area median income.

The Northfield Flats are planned for 4501 N. Xenia St. and would be developed by Denver-based Mile High Development and Illinois-based Brinshore Development.

The companies are currently building a project at 13th Avenue and Sherman Street in Cap Hill, and completed the 133-unit Sheridan Station Apartments at 5330 W. 11th Ave. earlier this year.

The companies do not yet own the nearly 7-acre site in Central Park; the current owner is an LLC affiliated with Brookfield Properties.

A City Council committee Tuesday forwarded a resolution to issue $18.3 million in multifamily housing revenue bonds for the project. A formal ordinance for the funding is expected to come to the council in the spring.

“The project’s location is expected to take advantage of the transit-rich conveniences, with many retail, entertainment and restaurant options in close proximity,” the application for the housing bonds stated.

The complex would be built near The Shops at Northfield and other retail outlet stores, and it is close to bus stops along Central Park Avenue.

Mile High Development has already constructed several other apartment complexes with income-restricted units in Denver, Aurora and Westminster, according to its website.

Northfield Flats is expected to include 42 one-bedroom, 82 two-bedroom, and four three-bedroom units, with wood-framed construction with brick and fiber cement siding. There are also plans for a community room with computers and a fitness center. Outdoors, there are plans for a south-facing patio with barbecues.

The application said construction is planned to begin in the spring.

A rendering shows the proposed design of the Northfield Flats, a planned 128-unit residential complex at 4501 N. Xenia St. that is expected to break ground in the spring. (Courtesy of the city of Denver)

The Northfield Flats would be built at 4501 N. Xenia St. by Mile High Development and Brinshore Development using $18.3 million in bonds issued by the city.