After nearly two decades in the same spot, Judi’s House has found a new place to call home.

The local nonprofit, which provides children and families with free grief therapy, is building a 26,470-square-foot facility at 10125 E. 25th Ave. in Aurora.

“These homes are beautiful, quaint and lovely and help grieving families feel like it’s an easy door to walk through. But we’ve really found that they’re not purpose-built homes,” said CEO Jessica Maitland Mayo.

“Each home is around 8,000 square feet, and it’s just kind of become cramped in the therapeutic spaces and created insufficient training areas,” she added. “Parking has become such a huge issue in this neighborhood that there have been significant barriers to offering care to our families. It makes it more difficult to seek our services during the hardest time of their lives.”

The foundation sold the home at 1741 Gaylord St. for $1.5 million on Oct. 22 to 1741 Gaylord LLC, which is managed by Denver developer Mike Mathieson, according to property records. But the nonprofit is leasing it back until they can move into their new facility in August. The other home is on the market, Maitland Mayo said.

Judi’s House’s new Aurora facility is being designed by Davis Partnership Architects and built by PCL Construction. The outside is modeled to resemble a home, similar to its current location, to help visitors find comfort.

“There’s such an emotional component of all of the therapeutic work and the trust that so many families have placed in us that have happened within our walls, and we’re working really hard to bring that spirit of place with us to the new building,” Maitland Mayo said.

“As children come to us for support, we want children to identify a home-like feel. But a kid’s version of a home is really different depending on who they are and how they grew up, whether it’s in an apartment, mobile home or townhome,” she added. “So Davis Partnership and PCL have really helped us create different spaces that can evoke all those feelings throughout the facility.”

The project began in July and is expected to be completed in the summer of 2022. It will feature 50 parking spaces, a large backyard garden for outdoor therapy, customized art, play and group therapy rooms, as well as employee offices. 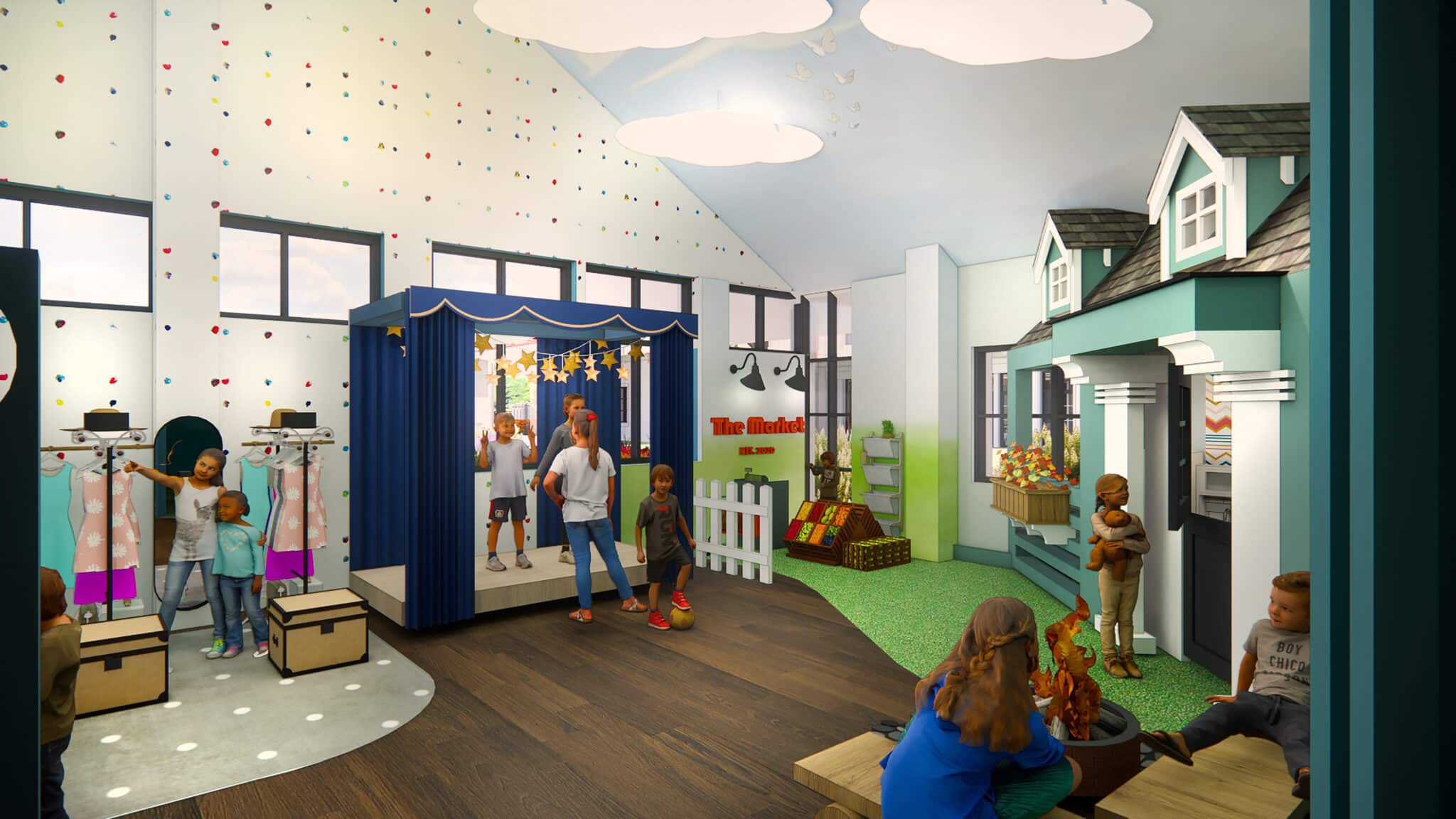 The new facility will include customized play therapy rooms.

Judi’s House’s new location is being funded by a $20 million capital campaign, which has raised around 80 percent of its goal. Donors include Bill Mosher, principal of Trammell Crow Co., and his wife Molly Broeren; The Anschutz Foundation; and Major League Baseball and the Colorado Rockies, which are sponsoring a room.

“When we reach our $20 million goal, we’re hoping that will also include a little bit of capital reserve to support the building as we move through the future as well,” Maitland Mayo said. 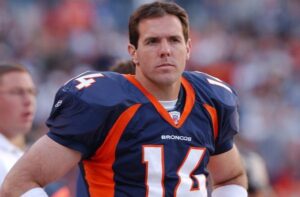 Brian Griese in 2010. Photo courtesy of the Denver Post.

Former Denver Broncos quarterback Brian Griese founded Judi’s House in 2002 with his wife, Dr. Brook Griese, a clinical psychologist specializing in childhood trauma and loss, in memory of Brian’s mother, Judi, who died when he was just 12 years old. Since then, the nonprofit has served more than 12,000 children and families.

“Next year will be our 20th anniversary as an organization, and it seems really apropos that we’re moving into our new facility as we turn 20 and think about the next 20, 40 and 60 years ahead,” Maitland Mayo said. 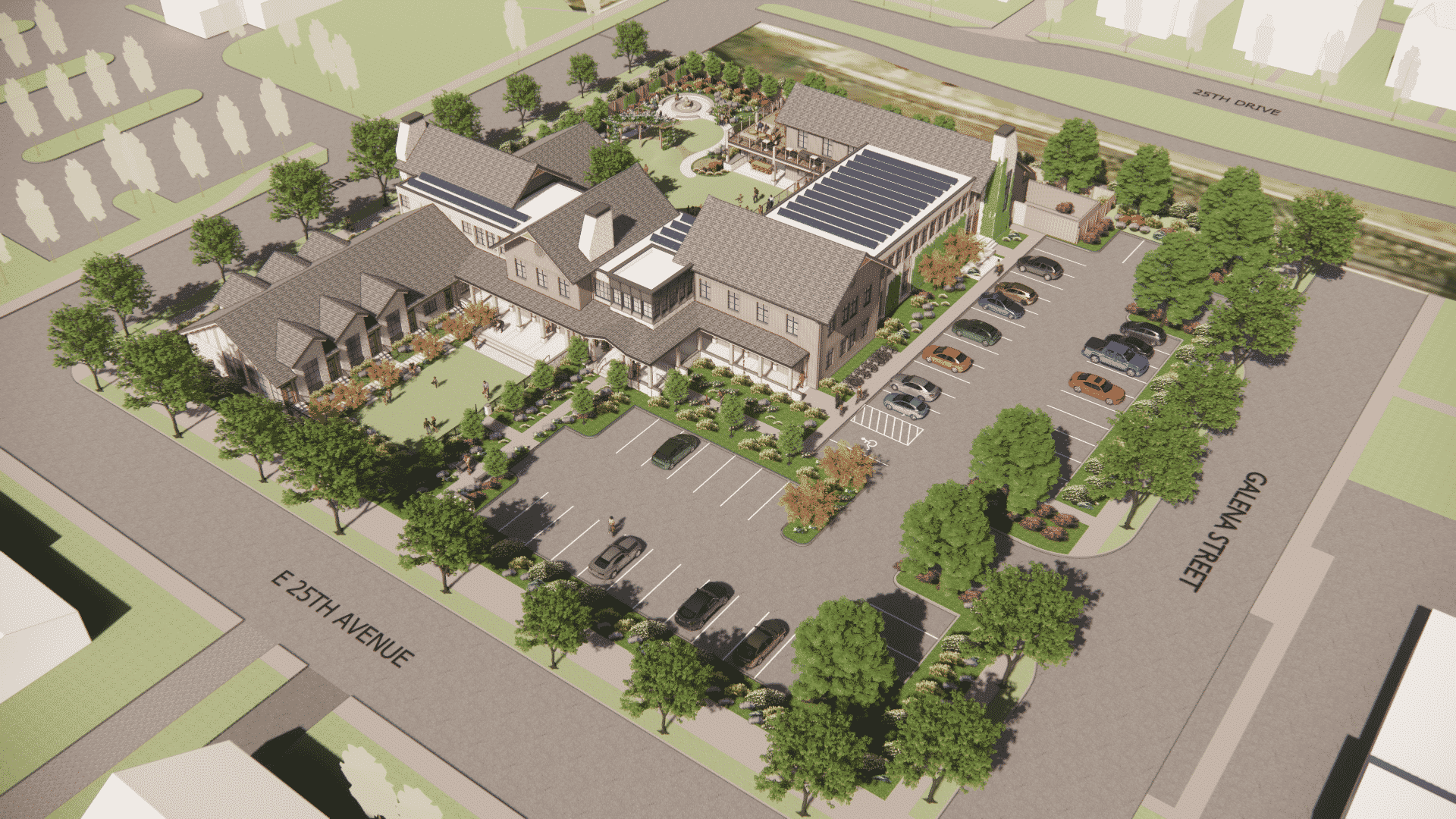 Judi’s House’s new location in Aurora will have 50 parking spaces.

Judi’s House also has an education and research arm, JAG Institute, which distributes grief research “that can be utilized in our field and beyond to help make the case that childhood bereavement is a real issue within our country that needs to be addressed,” Maitland Mayo said.

Each year, JAG Institute releases a Childhood Bereavement Estimation Model in partnership with New York Life Foundation. It approximates that one in 14, or 5.3 million, children in the U.S. will experience the death of a parent or sibling by age 18. JAG Institute also hires interns to attend grief counseling workshops and training.

Maitland Mayo became CEO of the nonprofit in 2019. Before that, she was a client of Judi’s House. Her husband passed away eight years ago when her children were 7 and 11.

“I had a job and a busy life, and I came to Judi’s House as a client with my kids, and it was the one place that I felt safe to grieve and felt that I was heard and seen,” Maitland Mayo. “My kids were able to talk to other kids with similar experiences, and it was immensely helpful to us. I’m thrilled we get to move to the next era of this organization, but there is a part of me that’s a little sad too because my family did work within these walls.”

Correction: This story has been updated to correct how long Judi’s House has operated in City Park West.