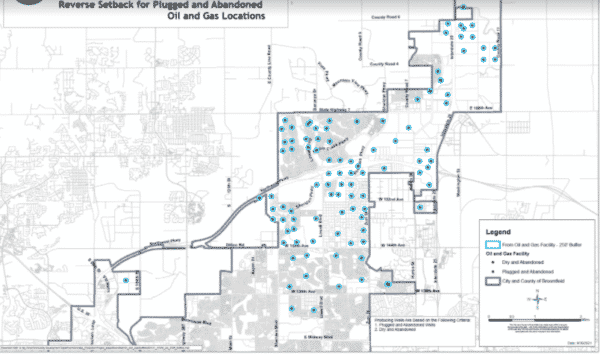 There are 111 total plugged and abandoned wells in Broomfield. Courtesy Broomfield city documents.

Home builders must now take into account the locations of plugged and abandoned oil and gas wells when working in Broomfield.

The Broomfield City Council, on an 8-1 vote Tuesday, approved a measure that requires a 250-foot reverse setback between plugged wells and residential developments.

Tuesday’s vote came after a similar measure regulating reverse setbacks for pre-production oil and gas wells was passed in June.

The measure for plugged and abandoned oil and gas wells includes a number of exemptions for developers with projects already in process.

There are 111 total plugged and abandoned wells in Broomfield. Of those, 26 are not located in areas that would be exempt.

To address future development in these non-exempt areas, the Broomfield City Council passed an amendment to its ordinance that allows construction to occur within 150 feet of a plugged well if certain additional safety precautions are taken.

“I think this is a really good compromise to protect public safety and give some consistency for our developers,” Broomfield City Councilman William Lindstedt said.

Councilwoman Kimberly Groom was the sole no-vote on Tuesday night; she said the ordinance places undue burdens on developers.

The next reverse setback-related steps for Broomfield leaders is to adopt rules for construction around producing wells and for the development of non-residential buildings near wells.

There are 111 total plugged and abandoned wells in Broomfield. Courtesy Broomfield city documents.

Home builders must now take into account the locations of plugged and abandoned oil and gas wells when working in Broomfield.