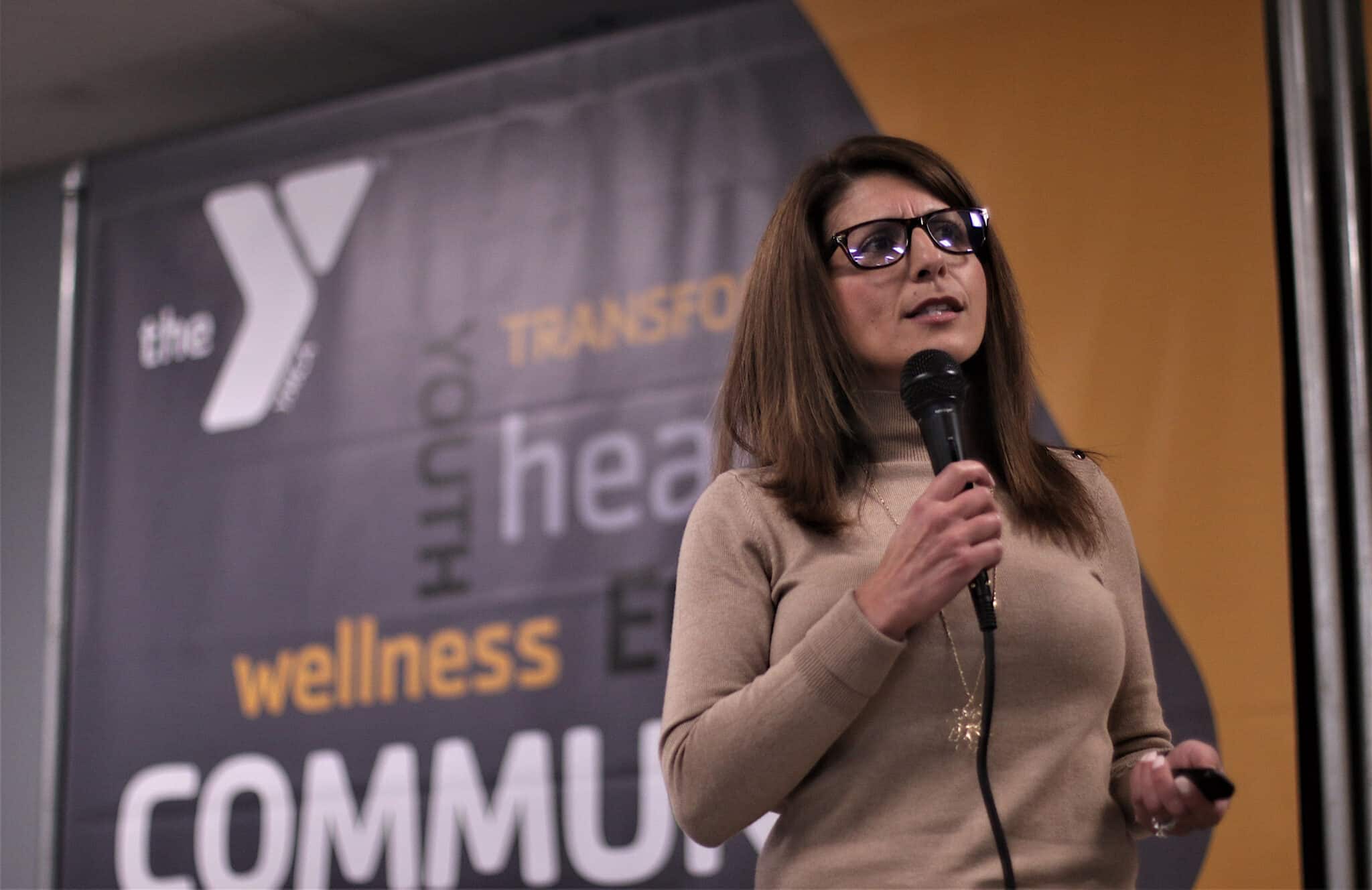 Sue Glass, president and CEO of the YMCA of Metro Denver, speaks to an audience Tuesday at the University Hills YMCA about future plans for the South Colorado Boulevard center. (Eric Heinz photos)

The YMCA of Metro Denver is working with a pair of firms on a plan to redevelop its property at the corner of Colorado Boulevard and Yale Avenue in Denver.

The arrangement with Denver-based Confluent Development and San Francisco-based Republic Metropolitan (ReMet) could mean a new building for the University Hills YMCA, and for the firms to take ownership of some of the land and likely build apartments.

The YMCA of Metro Denver owns about 5.8 acres at the prominent corner. The University Hills YMCA, at 3901 E. Yale Ave., is also known as the Schlessman Family YMCA. The second building at 2625 S. Colorado Blvd. houses the regional YMCA’s headquarters. Much of the rest of the property is parking.

President and CEO Sue Glass said the two buildings were constructed in the 1950s and 1960s. Although they’ve been renovated, the nonprofit can’t afford to keep bandaging the buildings, she said.

“These buildings are old. They’re not energy-efficient,” Glass said. “We have a lot of space, but we have approximately 35,000 square feet of unusable space between these two buildings. We’re not able to maximize our ability to serve people.”

Glass spoke about the plans to about 300 people Tuesday night, most of them watching online, from the basement of the University Hills YMCA, which would include possibly demolishing the two buildings and replacing them with one new structure. 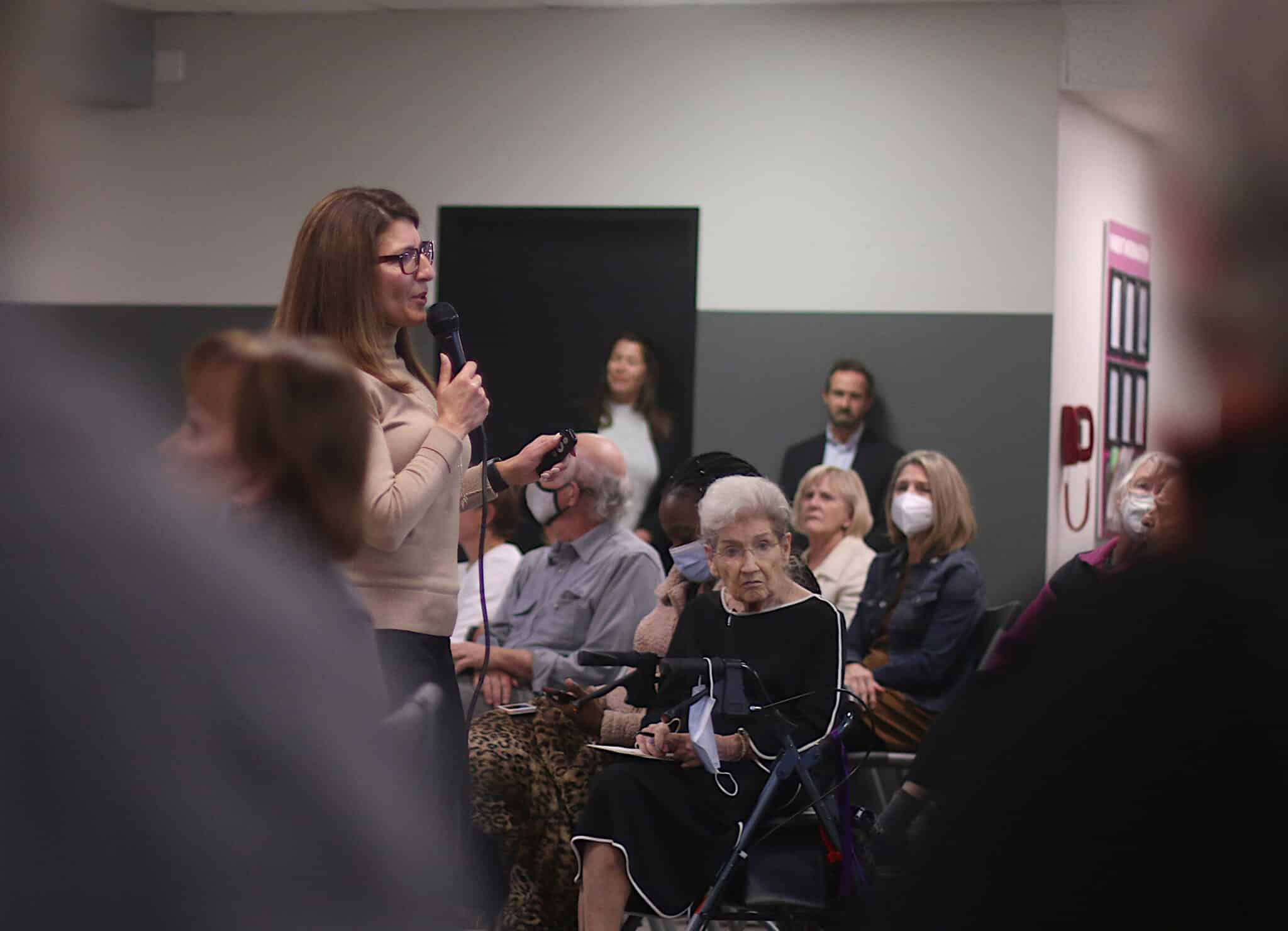 About 300 people, most of them watching online, attended the Tuesday night meeting about the future of the University Hills YMCA.

Many of the people in the audience had concerns that the YMCA facility would be sold off and closed. Glass said the plan is that Confluent and ReMet would develop the new YMCA facility, and that the nonprofit would own the building and the land underneath it.

But other portions of the property could be sold to Confluent and ReMet, which would then develop their own projects, Glass said.

Celeste Tanner of Confluent Development and Aaron Mendelsohn of ReMet said they will not submit plans for construction until they have received adequate input from the community, and Glass said it could be nearly two years before any projects begin.

Cheryle Mangels, a former chair of the University Hills YMCA advisory board, said she is not opposed to a new building, but has concerns about the uncertainty of how much the effort could cost. She said there could have been more communication from YMCA executives about the plans.

“The first time I heard was last night that there was going to be a dedicated Y building,” Mangels said Wednesday. “I think if that had been communicated all along, that would have taken out not just the members’ concerns but the neighbors’.”

Glass said there were discussions that took place before the Tuesday meeting, but rumors began to spread on the app NextDoor after someone violated an agreement not to talk about them. The meeting was held earlier than anticipated to address concerns, she said. 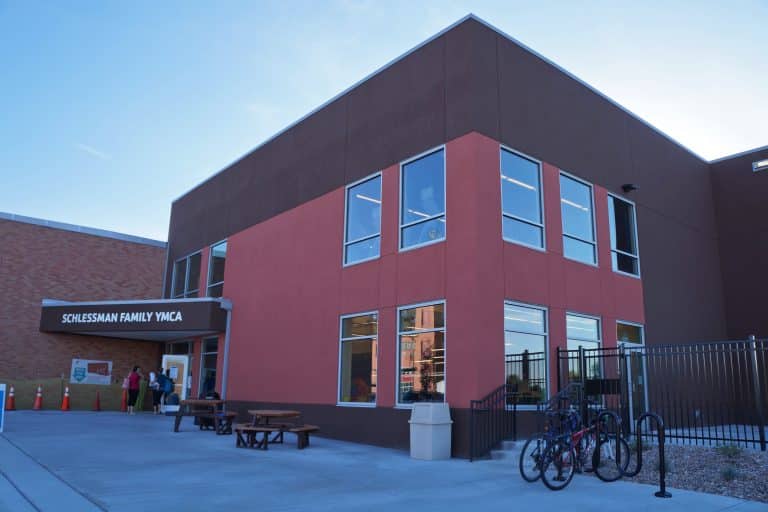 Glass also said the University Hills YMCA is the busiest in the Metro Denver region. When COVID hit, the facility lost about 50 percent of its 4,000 members, but it has rebounded to about 70 percent of the pre-pandemic figure.

The facility has a gym and swimming pool as well as an early childcare facility with 85 participants, but Glass said the goal is to create more programs and athletic opportunities to attract more people from diverse backgrounds.

“The YMCA will do better by modernizing our facilities and providing the services that our community needs, and we want to be a vital part of this community,” she said.

People who attended and said they live close to the YMCA had concerns about construction and the overflow of people who could be moving to the apartments. Other people said if the YMCA moves forward with its plans, it should make the center more accessible for pedestrians trying to cross Colorado Boulevard or Yale Avenue.

Tanner said the developers also plan to make improvements to the connectivity of the Harvard Gulch trail that runs near the YMCA.

Information on the next community meetings about the University Hills YMCA will be posted to the center’s website.

Sue Glass, president and CEO of the YMCA of Metro Denver, speaks to an audience Tuesday at the University Hills YMCA about future plans for the South Colorado Boulevard center. (Eric Heinz photos)