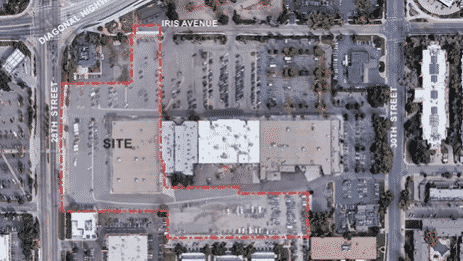 An aerial photo of Diagonal Plaza showing the area to be redeveloped. Courtesy Boulder planning documents..

The special ordinance addresses a quirk in Boulder’s land-use code that requires a certain portion of the project be dedicated as open space. While open-space dedication is certainly a worthwhile goal, Boulder officials say, the requirement makes the proposed Diagonal Plaza redevelopment impossible and therefore should be waived in this case.

Despite the reduction of open space, city officials and staff have been generally supportive of the move because “the project would further the city’s revitalization and sustainability goals for the site,” Boulder planning director Jacob Lindsey said.

The developers —  a partnership between Boulder Housing Partners and Trammell Crow Co. — are planning to build 213 workforce housing units and 71 affordably priced apartments at the site of a shuttered Sports Authority and underutilized parking lot space at 3320 28th St.

If forced to adhere to the city’s open space requirements, the developers would not be able to include enough units to make it financially viable.

“I would just remind us all that this property has sat fallow for decades,” Coburn Architecture principal Bill Howlicky said. Coburn is the project’s architect and is representing the developers in the city’s approval process.

“It has not been financially viable up until this point,” he said. “This density allowance is the absolute minimum needed to make this happen.”

Under the special ordinance, the builder would still have to provide some open space, which it plans to do in the form of a park and community garden.

“This site needs a lot of love, and I think this is a great way to bring love to the site,” Mayor Sam Weaver said of the special ordinance.

Special ordinances, like the one being considered to waive open-space requirements, can be considered in situations where “undue hardship on a property owner could be avoided, in the interest of the public health, safety, and welfare of the residents of the city and where consistent with the Boulder Valley Comprehensive Plan,” according to a city memo.

There have been more than a dozen past instances of one-off ordinances being used to smooth the development process for important projects such as Trinity Commons, Wellman Creek and the Mapleton mobile home park.

While the special ordinance moves the Diagonal Plaza redevelopment plan through the conceptual review stage of the approval process, the project is “still subject to significant community discussion” during the site review, Lindsey said.

An aerial photo of Diagonal Plaza showing the area to be redeveloped. Courtesy Boulder planning documents..

The special ordinance addresses a quirk in Boulder’s land-use code that requires a certain portion of the project be dedicated as open space. The requirement made the proposed Diagonal Plaza redevelopment impossible.