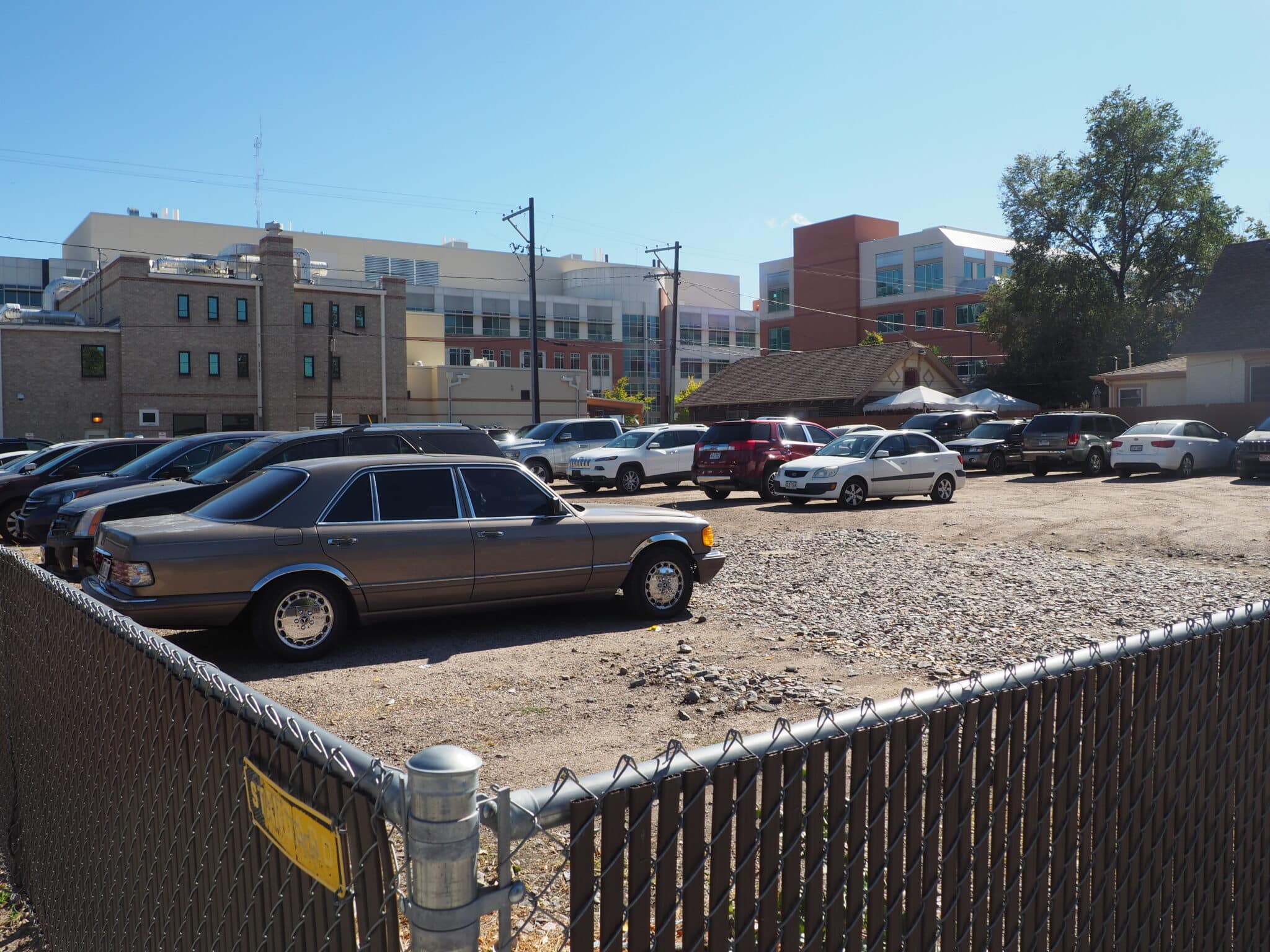 This gravel parking lot at 780 Elati St., owned by Denver Health, is slated to become the next city-sanctioned homeless campsite in Denver. (Thomas Gounley photo)

Another sanctioned homeless encampment is planned for Denver, this time on a gravel parking lot in Lincoln Park owned by Denver Health.

The campsite would be established at 780 Elati St., according to a flyer distributed to neighbors on Wednesday. The site is on a corner next to single-family homes and a Denver Health building.

The flyer said there will be an informational meeting about the site on Nov. 3, but indicated things could move quickly. It said the project will be “active” from Nov. 10 to Oct. 22, 2022, with two six-month renewal options.

The campsite would be managed by nonprofit Colorado Village Collaborative, which also runs the two existing “safe outdoor spaces” in Park Hill and on the Regis University campus.

CVC Director Cole Chandler told BusinessDen on Wednesday that his organization is working diligently to speak with the neighbors, and that more information would be provided Thursday. Denver Health spokeswoman Rachel Hirsch said the organization could not comment until Thursday.

According to documents prepared by the nonprofit for neighbors and obtained by BusinessDen, people of all races and ethnicities would be allowed to use the tents for temporary living, but operators would work with several organizations to specifically assist homeless Native Americans.

“This site is in a wonderful location near individuals who are already experiencing unsheltered homelessness, and Denver Health wanted to use its land in this way to address our housing and homelessness crisis,” CVC said in the document.

The parking lot is 0.29 acres, according to property records. CVC said in the documents it will have 40 individual tents with room for up to 50 people.

As with the existing campsites, drugs and alcohol would not be permitted at the site, although Chandler said during a city board hearing for the Park Hill outdoor camping site the nonprofit operates that substances do get smuggled in on occasion.

In the documents prepared for neighbors, the nonprofit said its model is working.

“In the first nine months, we have seen 14 residents transition to longer-term housing options, 18 residents begin work or an employment program and over 350 case management appointments,” the collaborative said.

Stella Yu, a member of the La Alma-Lincoln Park Neighborhood Association, told BusinessDen she has not had time to reach out to some of the residents near the proposed site.

“It came up so quickly, and we said that the adjacent neighbors would have great interest in this, and so there needs to be a conversation with them,” Yu said.

Yu said she had a meeting with Councilwoman Jamie Torres, who represents Lincoln Park, and her staff to discuss the proposal, but there hasn’t been much discussion about it since last month.

Mayor Michael Hancock said in July that he intends to create more outdoor camping sites for the homeless.

Laura Swartz of the city’s Community Planning and Development Department said each of the managed campsites needs to be permitted, but the process for them is done administratively — not through City Council review — as the sites are not permanent fixtures. The Lincoln Park site has yet to be formally approved.

In August, the Board of Adjustment for Zoning denied appeals of several Denver residents to the actions of the zoning administrator, Tina Axelrad, after she determined the Park Hill Methodist Church outdoor camping site could operate.

Those residents filed a lawsuit later that month in Denver District Court to get the Safe Outdoor Site there removed, and that case is currently in litigation.

An order from Community Planning and Development Director Laura Aldrete in October 2020 granted the zoning administrator the power to permit temporary camping sites and other “unlisted zoning uses” sanctioned by the city until the end of 2023.

An initiative on the November ballot would limit the number of sanctioned campsites on public property to four, as well as compel the city to enforce its camping ban by responding to complaints faster. Denver sued over it last week.

This gravel parking lot at 780 Elati St., owned by Denver Health, is slated to become the next city-sanctioned homeless campsite in Denver. (Thomas Gounley photo)