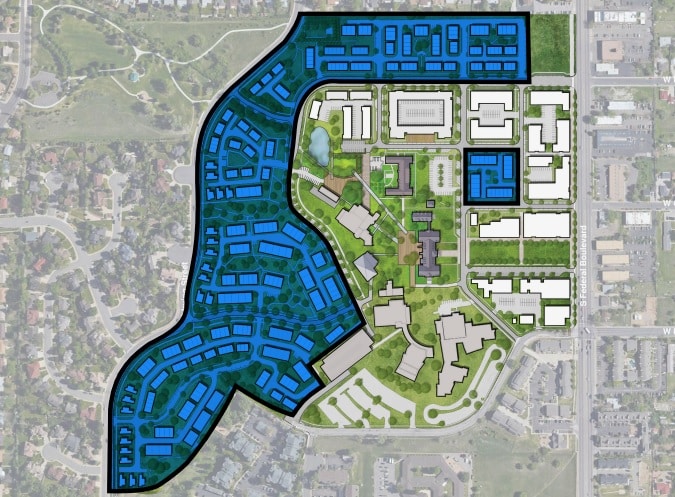 The blue highlighted portion of this map shows the land purchased by Thrive Home Builders on the Loretto Heights campus on South Federal Boulevard. (Courtesy of Westside Investment Partners)

The owner of the former Loretto Heights campus in the southwest area of the city has sold about a third of the site to a Denver-based homebuilder. 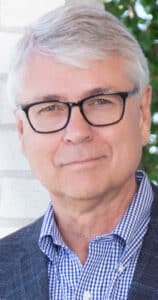 Thrive Home Builders paid $14.4 million, according to public records, for what CEO Gene Myers described as about 25 acres along the north and west edges of the campus.

The company plans to build 322 homes, some detached and some townhomes.

“Our hope is that this will be a real asset to the neighborhood,” Myers said, adding construction could start mid-2022.

The campus’ educational roots date to the 1890s, when the site was home to girls’ school Loretto Heights Academy, run by the Catholic religious order Sisters of Loretto. Elementary and secondary programs were phased out in the 1940s, and the school became known as Loretto Heights College.

That school closed in the late 1980s, and Japan-based Teikyo University Group purchased the property and operated it as Colorado Heights University until 2017.

The land was rezoned in May, paving the way for major redevelopment. One project is already underway. The 72-unit Pancratia Hall is being renovated for use as income-restricted housing, and is expected to open by the end of the year.

Klein said more than 200 meetings were hosted for residents to provide comments on the development plans over the last few years.

“The input from the community has been overwhelming and amazing,” he said. “What we envision is a neighborhood plan crafted by the community and a process that facilitates discussion with the neighbors.”

More deals are in the works. Denver-based multifamily developer Grand Peaks is expected to close on another part of the campus later this month. Klein said he’s also looking to bring in a grocery store, although no deal has been finalized. 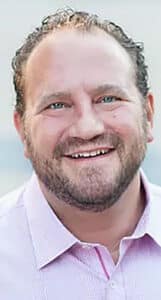 In total, Klein said he hopes 1,000 residential units will be built on the Loretto Heights campus. According to a development agreement with the city, at least 12 percent of all residential units on the land must be income-restricted. Thrive is expected to keep about 14 of the units it builds within that lower price range.

In addition, Denver voters will be asked in November to decide whether to dedicate $30 million to rehabilitating the 1,000-seat May Bonfils Stanton Theater, which is also located on the campus.

“I didn’t even know this when we bought it, but the Loretto campus is a huge part of a lot of people’s lives,” Klein said. “A lot of people have been involved and have been to the campus for various weddings and events.”

Westside is also trying to develop the land at the former Park Hill Golf Club, which shuttered in 2018. The effort has led to dual ballot measures this November — one backed by Westside and one backed by individuals who want the course to stay as some form of open space.

The blue highlighted portion of this map shows the land purchased by Thrive Home Builders on the Loretto Heights campus on South Federal Boulevard. (Courtesy of Westside Investment Partners)