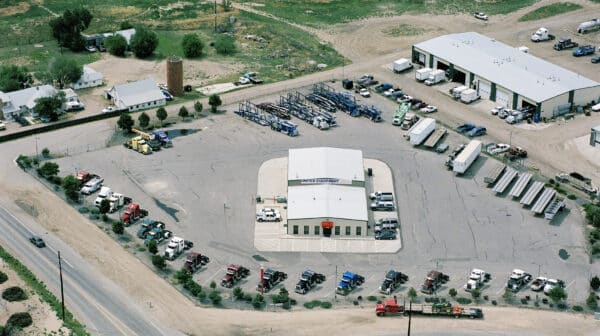 Industrial property owners in parts of the northern metro area may lose the ability to store large portions of their inventory outdoors if Adams County adopts proposed regulations.

The county is considering changes to zoning language that would reduce the amount of space that can be used for outdoor storage in unincorporated parts of the county, outside the limits of municipalities like Commerce City.

Laurie Johnson, chief operating officer of 5280 Community Waste Solutions and co-chair of the Industrial Property Owners Consortium of Adams County, told BusinessDen it may not be possible for her business to reduce its outdoor storage by as much as the county is proposing.

“In the winter, when construction is not as high, our entire lot could be full of dumpsters, empty dumpsters that are not moving,” Johnson said. “If we can’t store those out there, we cannot conduct our business.”

Adams County has three different industrial zones, determined by size and use, for which the regulations apply.

Currently, industrial businesses in unincorporated areas can generally store items outdoors on up to 80 percent of their land or less than 10 acres, whichever is smaller. There is also a separate category for outdoor storage that is “in excess of 100% of building area,” according to county documents.

Adams County is now proposing the area that can be used for outdoor storage be reduced to between 25 percent and 50 percent of the lot, depending on its size.

Additionally, under both the existing and proposed zoning language, some industrial users have to get conditional use permits in connection with their outdoor storage.

The county is proposing to define outdoor storage as materials that are outside and on the business’ property for more than 72 hours, which would include “items for sale, lease, processing and repair (including vehicles) not in an enclosed building.”

Christa Bruning, a spokeswoman for Adams County, didn’t provide an answer when asked for the reasoning behind the proposed changes.

She said Adams County “often” does not comment on regulation updates because they are discussed at public meetings. The latest discussion regarding the industrial outdoor storage zoning proposals was during a Sept. 14 “study session” of the county commission, and no minutes from that meeting were available.

“As staff has worked through the drafting process and taken public input, there are some topics that may warrant additional time for development,” Bruning said.

Dave White, a general manager with trucking company JFW Corp., said that because of the proposed limitations, many industrial businesses will have to apply for special use permits, which may only be issued for five years.

“When you sit down and you look at what they’re implying or trying to change, there isn’t anyone that can do business in unincorporated Adams County,” White said. “You could be a business that sells heavy equipment (with) a parking lot that has 30 trucks in it, you will need a special use permit for every one of those trucks.”

The Industrial Property Owners Consortium of Adams County claims its members contribute an average of more than $137,000 annually in sales tax revenue for the county. White said there are about 140 businesses that are members of the group, but that the number of owners who know about the proposed regulations is limited.

“Virtually everyone we’ve contacted thus far through the process basically knows nothing about it,” White said.

“I don’t want to say we made great progress, but we informed them of all of our concerns.”

The Adams County Board of Commissioners had not scheduled the next hearing regarding the proposed zoning changes as of Friday morning. But White and Johnson said they’ve been told a Planning Commission hearing will take place Oct. 28, with a potential final vote Nov. 9.