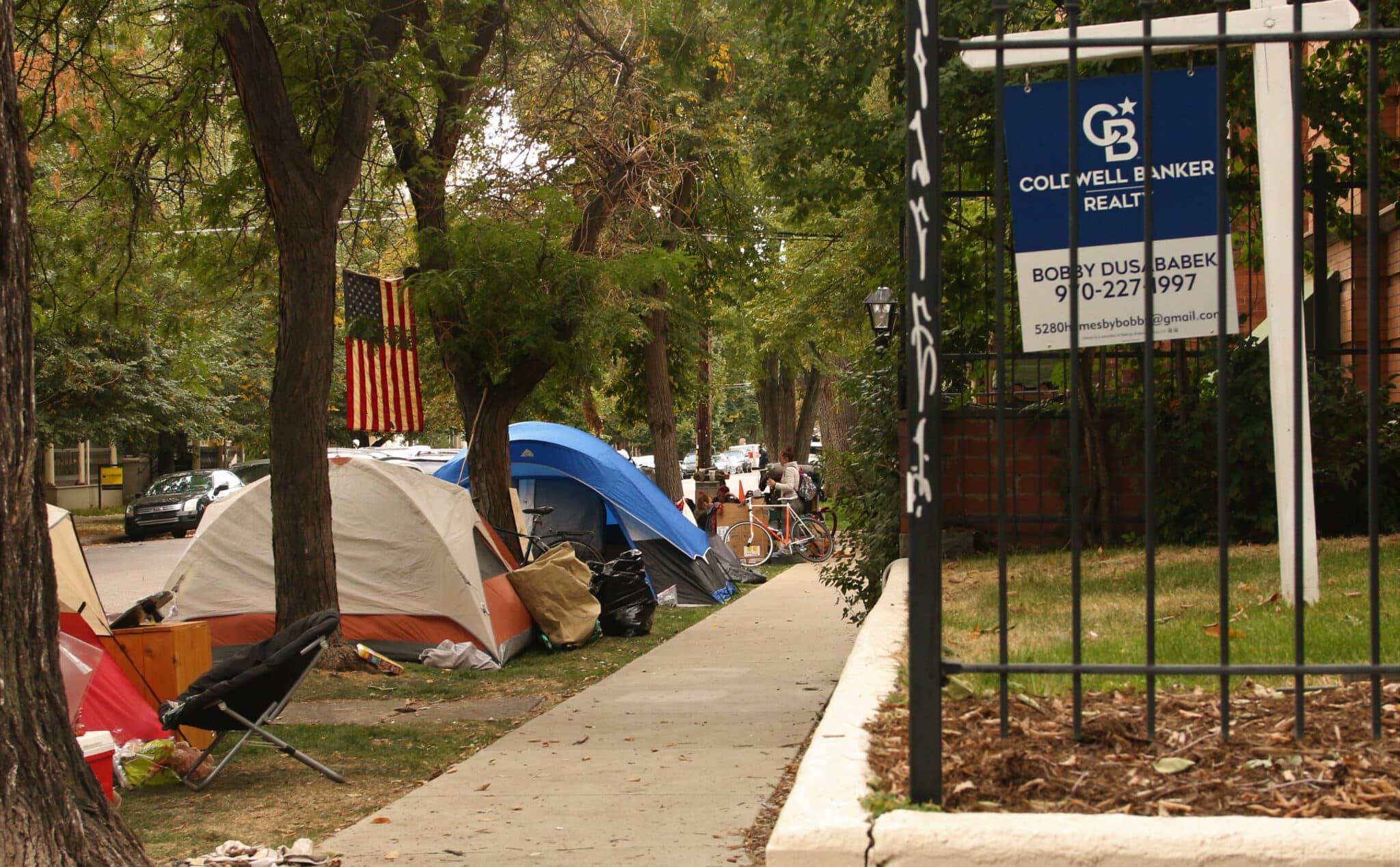 Several tents sit Tuesday along a berm at the corner of 10th Avenue and Corona Street in the Capitol Hill neighborhood next to a home with a real estate sign in its yard. (Eric Heinz photo)

Seven neighborhood organizations and business districts have sent a letter to Denver city officials asking them to immediately address homelessness.

The letter was sent by the Unhoused Action Coalition, which was formed by business improvement districts of RiNo and Colfax Avenue, and the neighborhood organizations of Capitol Hill United Neighborhoods, Curtis Park, Uptown on the Hill, Baker Historic and Old San Rafael Historic.

The coalition is calling for more city-sanctioned and managed homeless encampments, more tiny homes and other quick sheltering options.

Specifically, the letter says the city should “make public properties available” for the managed campsites. So far, all four have been located on private property, generally church parking lots.

The UAC’s requests also included that the city create a cohesive strategy across its departments, add more detailed data on homelessness in Denver, deliver housing for people who are very income-restricted (30 percent or below median income) and provide a geographic breakdown of how city funds are spent on addressing homelessness.

The letter is a response to a draft five-year strategic plan to address homelessness and housing that was released by the city in August.

Travis Leiker, president of Capitol Hill United Neighborhoods, said the Unhoused Action Coalition has been meeting weekly for about a year.

“As conversations progressed, we incorporated other organizations into the conversation and discovered that all groups were having sort of the same discussion around the same issue,” he said.

Leiker said the city needs a plan that addresses the next 12 to 18 months in addition to a long-term strategy to alleviate homelessness.

He said the city’s five-year strategic plan is “ambitious” and the letter from UAC credited city staff with coming up with the plan.

“The challenge that we’re facing is what do you do today, and what do you do in the next four months with winter upon us?” Leiker said. “That’s what’s not clearly articulated, both from the perspective of this plan but also in the context of the immediacy and need for action that we’re hearing from small businesses, homeowners, renters and community advocates.”

The city received more than 1,750 responses to the draft five-year plan, and those will be reviewed by the City Council, said Sabrina Allie, a spokeswoman for the Department of Housing Stability.

“We are really grateful to the many organizations and individuals that took the time to provide feedback on the draft of our Five-Year Strategic Plan,” Allie said. “We hope the Unhoused Action Coalition — and others who took the time to participate in our planning process — will see their input incorporated into our final draft.”

Council staff said the five-year strategic plan will be heard in committee on Oct. 27 and it could be adopted as soon as Nov. 8.

Mayor Michael Hancock, during his budget presentation on Sept. 15, said he wants more managed campsites and tiny home villages, and he prioritized income-restricted housing as part of $190 million for the Housing Stability budget. There’s also a Nov. 2 ballot measure that would fund about $39 million for homeless services.

According to Metro Denver Homeless Initiative, the annual point-in-time count of homeless people — which was conducted at shelters only this year due to COVID-19 — showed 40 percent more people were staying in emergency shelters throughout the region for at least one night compared to last year, a total of more than 4,000 people.

The report also showed a doubling of the number of first-time homeless people.

“Homelessness in general is a complicated, layered issue. I’m not sure of the solutions to solve this, but as a board what we’re doing is to help that issue,” said Jevon Taylor, a board member of the RiNo Business Improvement District and the founder and CEO of False Ego clothing at 2650 Walnut St.

Taylor said he is in support of managed campsites, as well as providing hygienic services in the areas where homeless people congregate. He said there was a homeless encampment near his store recently, but it did not stay for very long.

“I thought it was kind of chill, nothing really crazy going on,” Taylor said of the camp. “But, of course, the next day there’s stones and new fences around the area, so I’m not sure what they did with that camp. I don’t think it’s a huge problem over by our shop, but I wish there was a better way to handle it. One day you’ll see a camp and one day you’ll see stones. Honestly, I’d like more information on solutions that are being presented.”

Ryan Cox, president of Curtis Park Neighbors, said homelessness takes up about half of his duties as a registered neighborhood organization leader.

“I do think there’s been more of a focus, and there is more money available to address the issues, and I hope we can focus on these individuals,” he said. “We really need to start to understand … what is needed for the folks on the streets and not just bringing them socks and water. We need a more in-depth approach to getting these people help.”

Cox said the Curtis Park organization has helped some people find services in the past, but providing permanent housing would provide more assistance than anything.

“I think a lot of what we are looking to speak to and address and provide insight on is the unsheltered community,” Cox said. “We don’t know these folks on an individual level, so it’s difficult to even begin to know how to address (their circumstance) when you don’t know what the needs are.”

Several tents sit Tuesday along a berm at the corner of 10th Avenue and Corona Street in the Capitol Hill neighborhood next to a home with a real estate sign in its yard. (Eric Heinz photo)