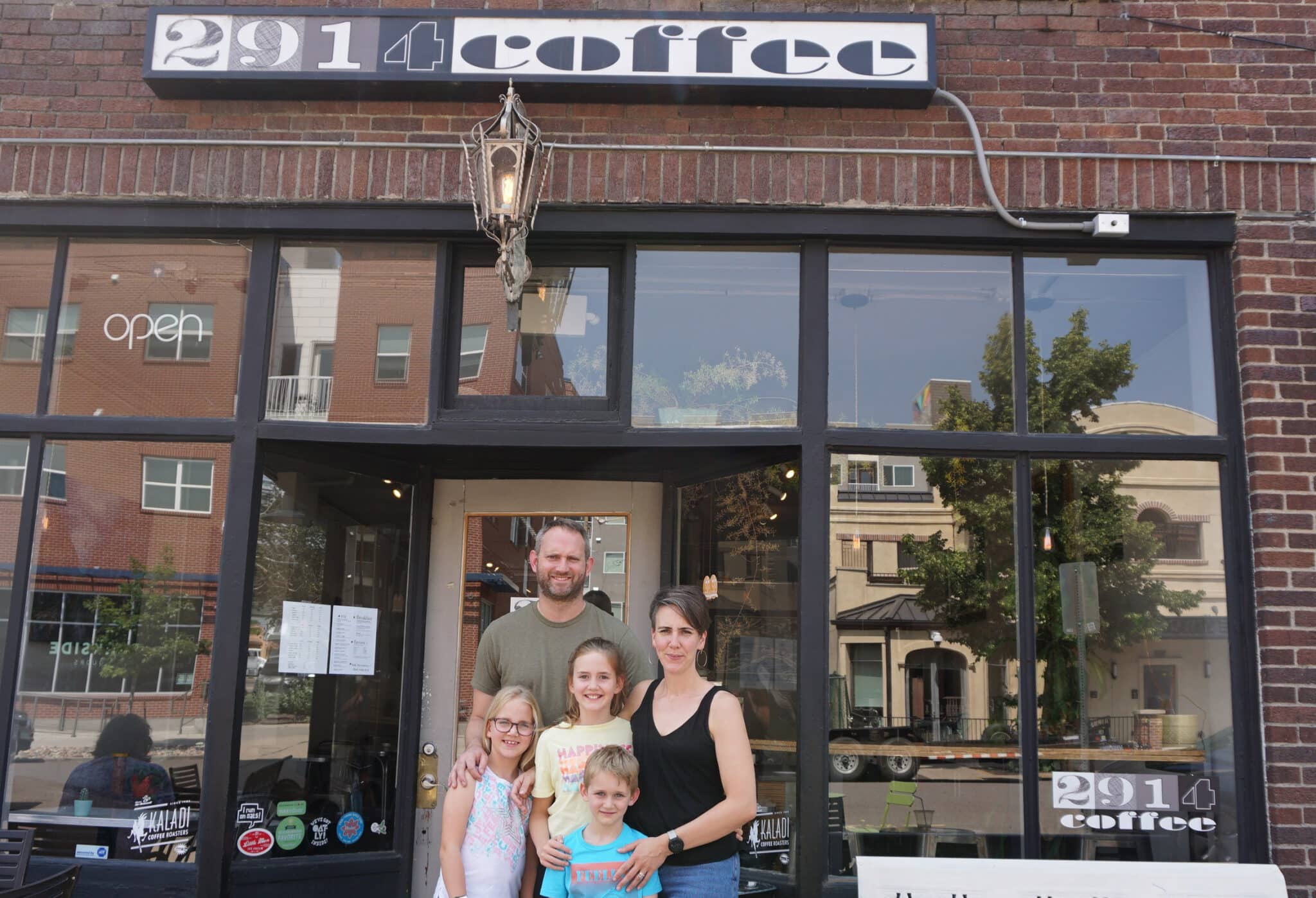 Will and Stephanie Naylor and their three children moved to Denver from England to own 2914 Coffee. (Lily O’Neill photos)

Stephanie and Will Naylor’s journey to the U.S. was nothing short of a rollercoaster.

In 2019, the couple decided to move from Gloucestershire, England to Denver. But they had to jump through some hoops to get here. One of them included the purchase of 2914 Coffee in Jefferson Park.

“We had a goal and we wanted to do it,” Stephanie said. “We had a lovely home in England, we had decent jobs, and our kids were in good schools. But it wasn’t enough. And both of us didn’t want to wake up in 10 years and be filled with regret.”

Will’s aunt, uncle and cousins Chris and Nick O’Sullivan, who own Brothers BBQ and Nuggs Ice Cream in Denver, have lived in Colorado since the early ’90s, and he’s been visiting them each summer for the past 20 years.

It was always his dream to move close to the mountains. And two years ago, while visiting Will’s aunt and uncle in Boulder, Stephanie finally caved after a “beautiful hike in the Flatirons,” she said.

Naylor, who usually works full-time as a nurse, was planning to get a work visa, but the process “proved quite tricky,” she said. So, their immigration lawyer suggested the couple buy a business in the U.S. and get an E-2 Investor Visa, which is issued to those who invest a substantial amount of capital in a U.S. business.

“He said it could be a nail salon or a liquor store, but we weren’t interested in those,” Naylor said. “We both like serving people. I’m a nurse by profession, and Will was a trained chef back in England, working at the same place for 12 years. So we thought, ‘What about a coffee shop?’ And then we literally googled coffee shops for sale in Denver.”

That’s when they came across the opportunity to purchase 2914 Coffee at 2914 W. 25th Ave. Owners Melissa and Anthony Davis opened the business in 2012, but decided to move on when COVID hit.

In order to fund the deal, the Naylors sold their home and most of their possessions in England and lived in an Airbnb for their last six weeks there.

The couple was getting ready to fly out to Colorado to close the deal in April, but the travel ban forced a change of plans. 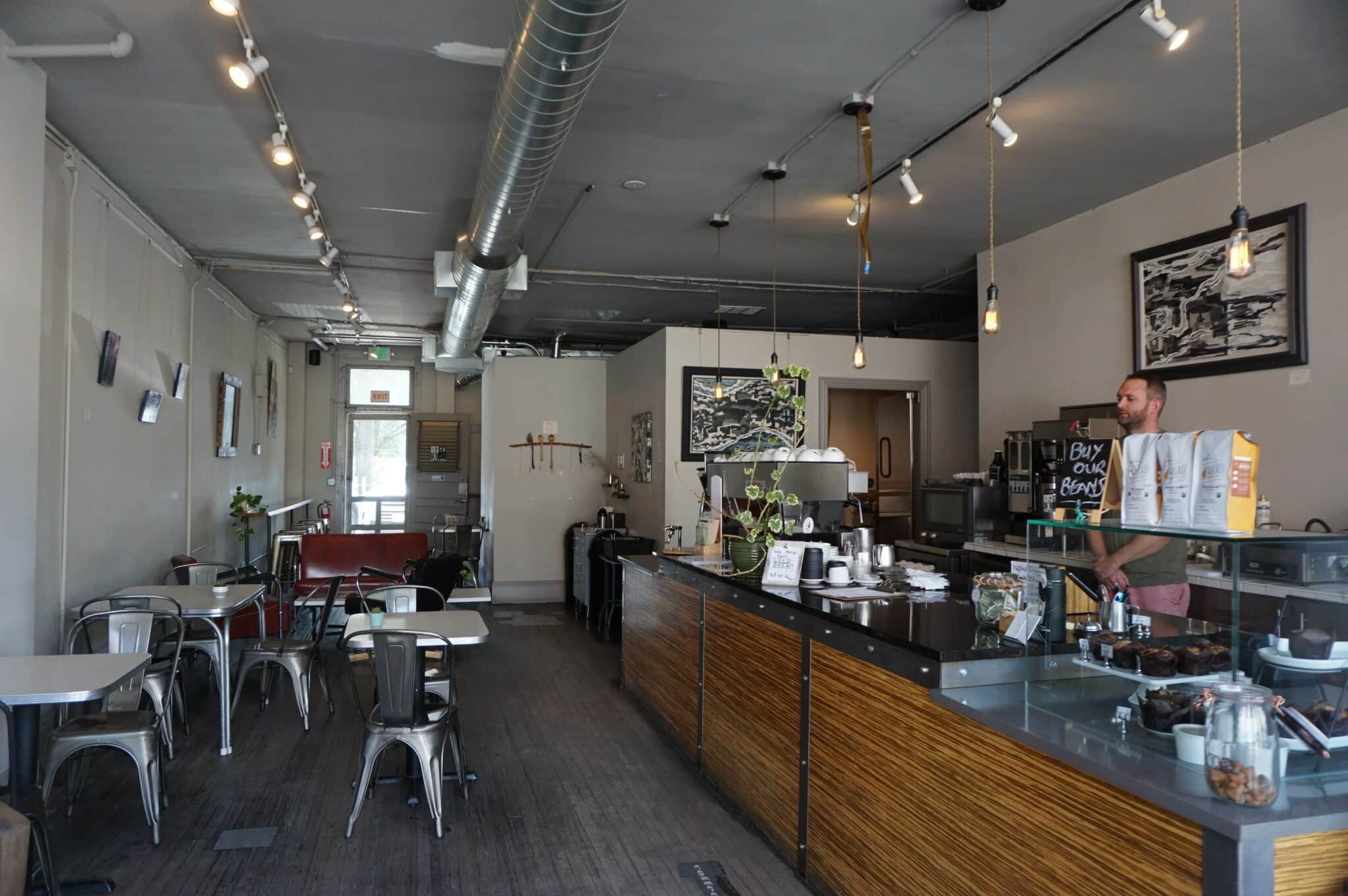 “We were sent home from Heathrow Airport and had to apply to the U.S. embassy for a National Interest Exception waiver in order to be able to travel, and they declined our case. Then I appealed it, and they declined again. But they said ‘However, you can travel to a third country, and as long as you’ve been out of the U.K. for 14 days, you can then travel to the U.S.,” Naylor said.

The Naylors decided to fly to Barbados. But the week of their new flight, a volcano erupted on neighboring St. Vincent and the Barbados airport was shut down.

A week later, they finally made it on a flight to Barbados, but mid-air another eruption occurred, so the flight was rerouted to Antigua. The couple celebrated their 10-year wedding anniversary in a resort there, “so we made the most of it,” Naylor said.

“We were just happy to finally be on the way to somewhere outside the U.K.,” she said.

The couple arrived in Denver on May 1 and bought the business two days later for $110,000, according to Stephanie. Shawn Sanborn with Sanborn and Co. represented the Davises in the deal.

“We had never set foot in the building until we bought it,” Naylor said. “It was odd walking in and being welcomed into your own shop. But we loved it and had a really good feeling from Anthony and Melissa, who also helped us learn the business in a sort of two-week hand-off period.”

This month, the family had to fly back to England for their final visa interview. They were approved, and while they were gone, a couple of Jefferson Park neighbors took over the shop for them, which “already made us feel like we belonged,” Naylor said.

The couple — now residents of Virginia Village — want to expand 2914 Coffee’s menu to offer lunch items such as paninis and plan to extend hours.

Because the five-year E-2 visa is under Will’s name, Stephanie can’t work at 2914 Coffee. But she recently accepted a part-time job as an oncology nurse at The Medical Center of Aurora, and is waiting to receive a work visa before she starts. Eventually, she hopes to be sponsored for a green card, which will give them permanent residency in the U.S.

“Looking back, I can’t believe we went through all of that,” Naylor said. “But I’ve enrolled the kids in school, I got a part-time job as a nurse, and we’ve had a grand opening for the shop, so this is the beginning now.”

Will and Stephanie Naylor and their three children moved to Denver from England to own 2914 Coffee. (Lily O’Neill photos)

Stephanie and Will Naylor purchased 2914 Coffee in May as a way to move to the U.S., but getting here wasn’t easy.