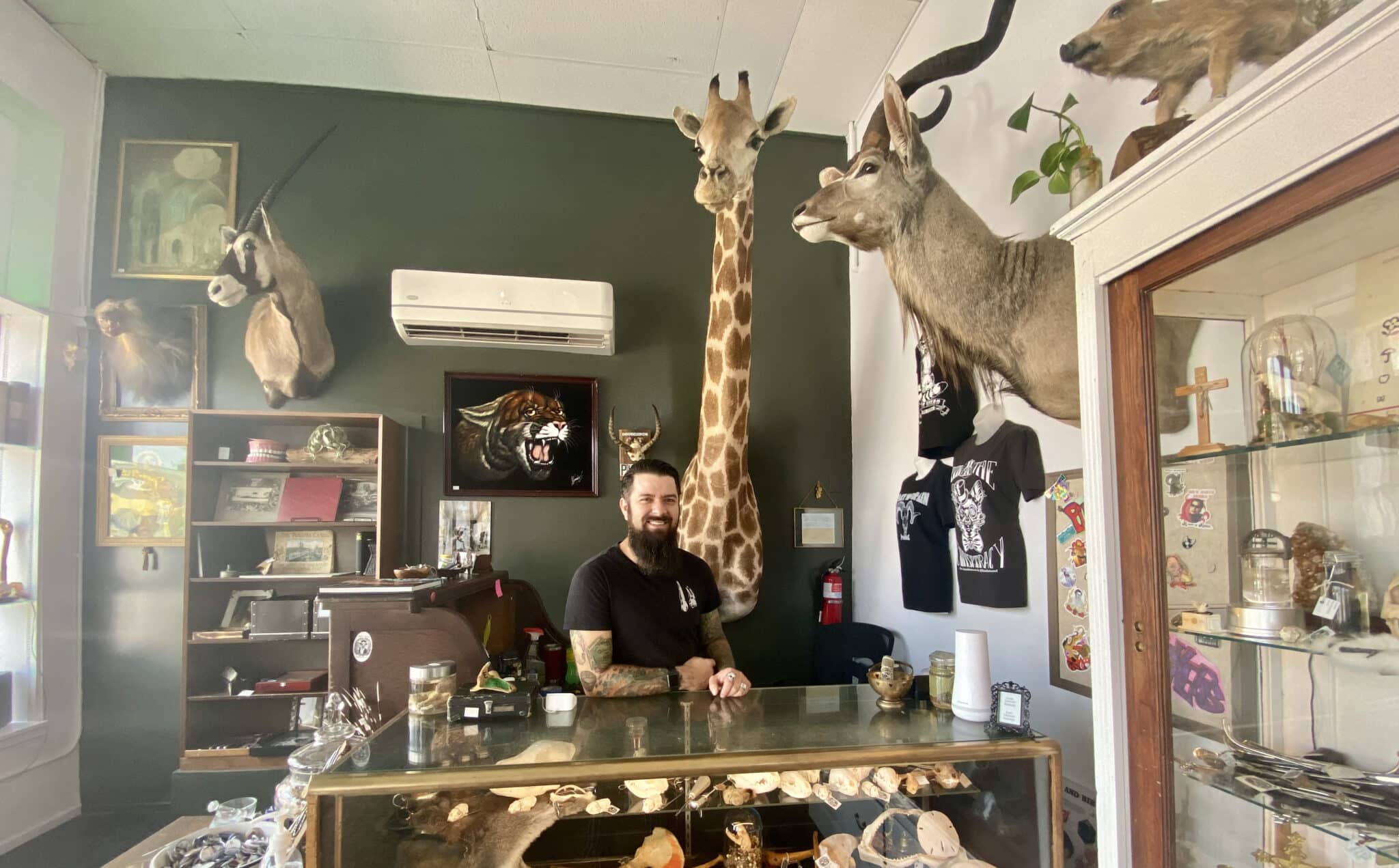 Jonathan Alberico first opened The Learned Lemur in Aurora in 2015 before moving it to a bigger space on Colfax Avenue last week. (Lily O’Neill photos)

Growing up in his parent’s antique shop on South Broadway, Jonathan Alberico always had an eye for the weird or discarded.

Every now and then his dad would let him bid on oddities at auctions, including one of the first pieces of his collection — an anatomical heart model.

“My parents at first thought it was pretty weird and didn’t really understand why, but they never said I wasn’t allowed,” Alberico said. “They allowed me a ton of freedom. Whenever my mom asks why I’m so weird, I remind her that she let me watch ‘Aliens’ when I was 4 years old.”

Over the years, he amassed a large collection of unique and rare antiques and started sharing it on online forums, where it garnered a lot of interest. Later, when his home was overflowing with too many oddities, he decided to sell some at a market, and “the turnout was incredible,” he said.

In 2015, Alberico decided to turn his side hobby into a full-time job and opened The Learned Lemur within a 250-square-foot co-op space in Aurora’s Heirloom Antique Mall at 1947 S. Havana St.

But after six years in the small space, Alberico was ready to take it to the next level. When the pandemic arrived, he said, it was the perfect time to take advantage of cheaper real estate options. 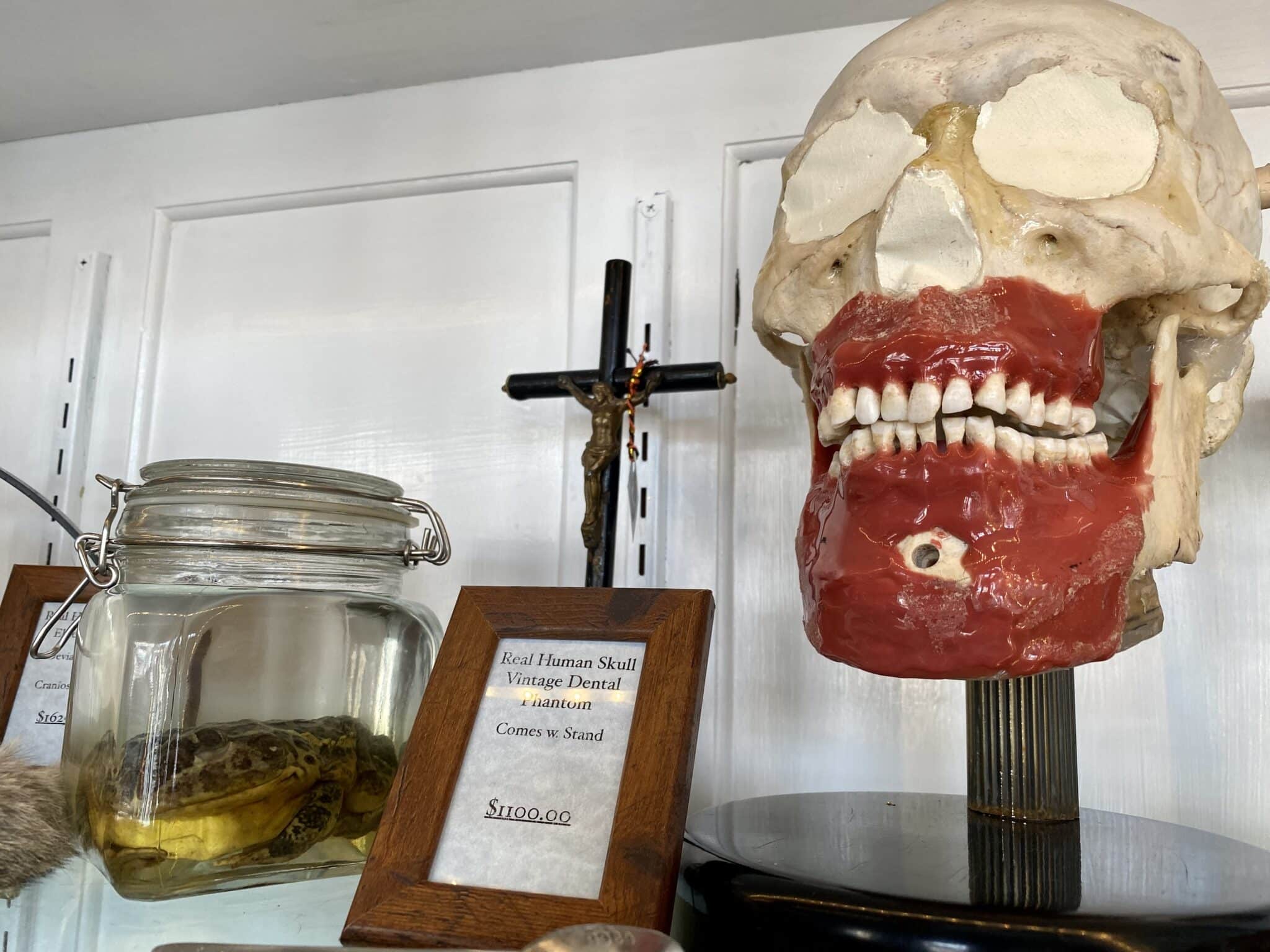 A human skull for sale at The Learned Lemur.

Last week, on Friday the 13th, he reopened his oddities shop in a larger, 1,100-square-foot space at 2220 E. Colfax Ave., where Midnight Rambler Boutique previously operated.

The Learned Lemur sells oddities ranging from $5 for slightly damaged animal skulls up to $5,000 for a 1978 taxidermied giraffe head from a private collection in South Carolina. Behind glass cases, there are human skulls — one with syphilis — and a human skeleton without a head. There’s also artwork from local artist Rocky Mountain Punk, religious antiques, animal furs, a bison mount from 1984 and a baboon mount from 1978.

Three weeks ago, Alberico said he sold a 9-foot-tall taxidermied ostrich to someone in Colorado Springs for $2,000.

“Our customers are pretty much anyone who finds a fascination with the slightly macabre or extremely dark,” Alberico said. “We do get the occasional witch looking who needs some parts for a spell or metal head that needs a goat skull for a performance, but for the most part it’s people looking to decorate their home in a unique way. We also get people who just come in because they’re curious or want to feel uncomfortable.”

Alberico gets most of his items from private collections and buyers with whom he works. The animal skulls come from trappers and varmint control companies he’s connected with around the country.

The Learned Lemur name was inspired by his grandfather, who “lived off a steady diet of old Western films,” Alberico said. He recalled watching old films with him and learning about how pubs had odd names back in the day, such as one that stuck with him from a movie called “The Intelligent Goat.” 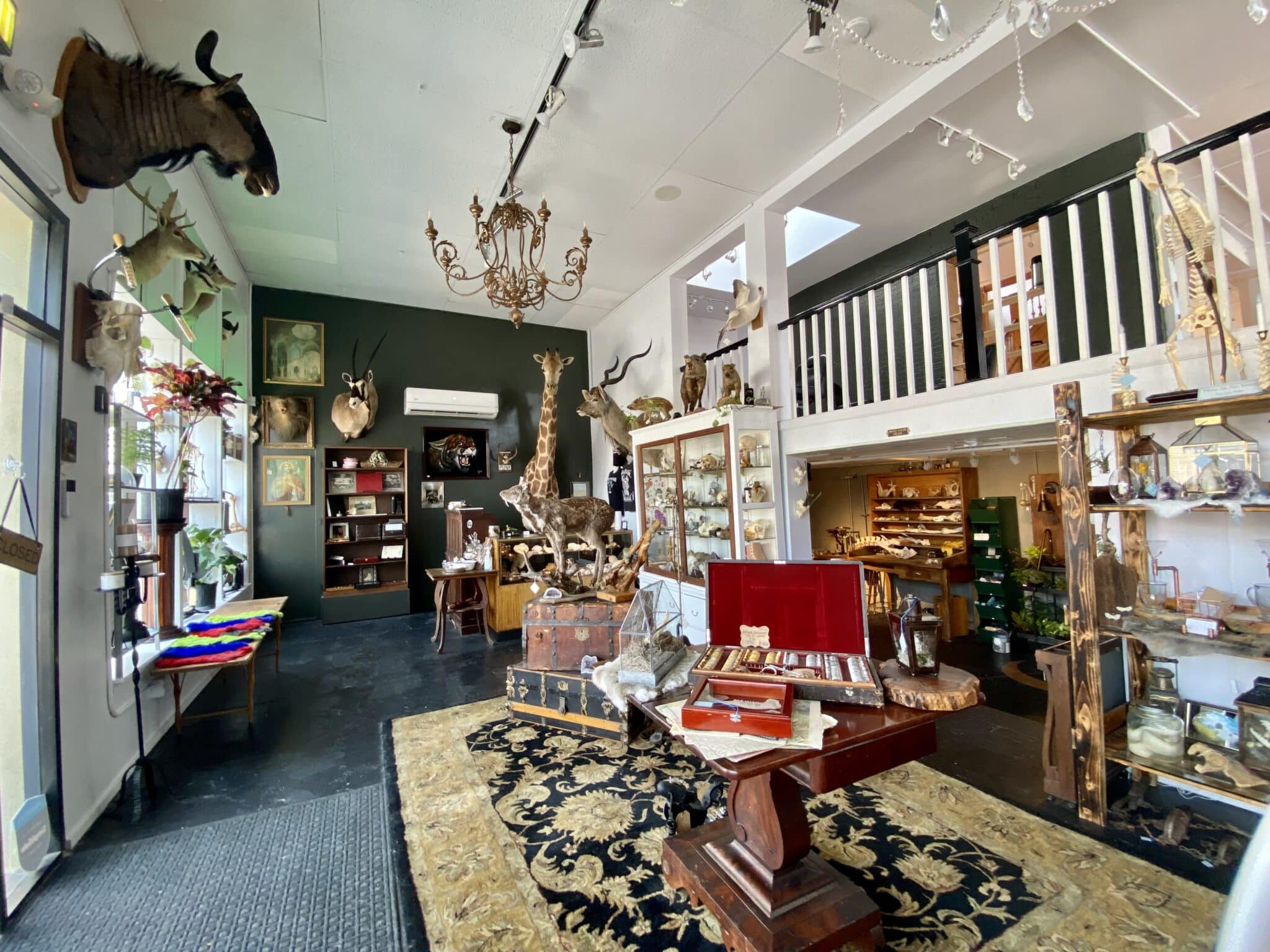 After writing a report on lemurs in college, Alberico learned how smart they were, and The Learned Lemur came to be.

Upstairs, the oddities shop will house Conspiracy Theory Tattoo in 2,000 square feet. Owners Jim and Molly Anderson are longtime tattoo artists in Denver, and co-signed the lease with their friend Alberico. They plan to open next month.

There will also be a 1,250-square-foot “freak show venue” out back, where Alberico plans to host monthly local artist pop-up markets and “side-show performances” with sword swallowers, fire eaters and snake charmers.

“I’ve always taken inspiration from Barnum and his sort of collection of freaks,” Alberico said. “I went to a freak show as a kid and was just in love. I thought it was the coolest thing ever to watch someone hammer a nail into their face, and I stapled a dollar to someone’s leg with pure joy, while every other kid was crying.”

Since Alberico has grown his collection out of his childhood bedroom and into a shop on Colfax, he said his parents’ concern has died down a little bit.

“Seeing it on a shelf in a kid’s room was weird, but seeing an entire store, or in my case, an entire home decorated in a macabre fashion has made them realize how beautiful it can look together,” he said.

Jonathan Alberico first opened The Learned Lemur in Aurora in 2015 before moving it to a bigger space on Colfax Avenue last week. (Lily O’Neill photos)

“Our customers are pretty much anyone who finds a fascination with the slightly macabre or extremely dark,” said the owner of The Learned Lemur.