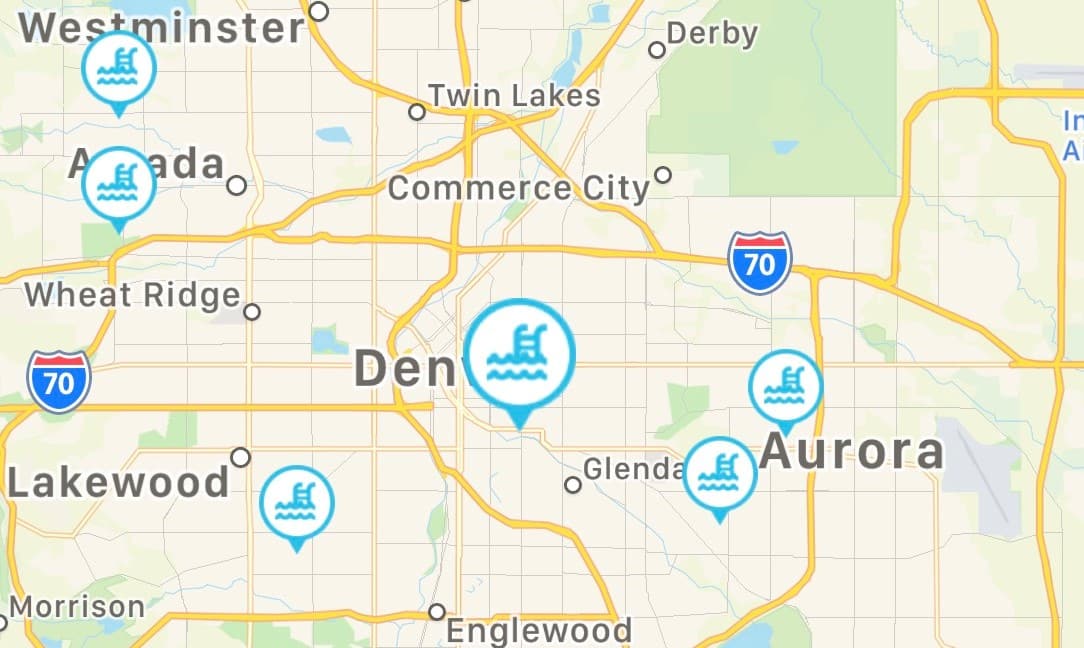 Swimply had 14 residential pools in the Denver metro area on its app Monday, including two inside city limits. (Screenshot courtesy of Swimply)

A company that helps people list their home swimming pools for hourly rent claims some of its clients make more than $10,000 a month.

But it’s not that simple for Denver’s private pool owners.

Unlike short-term home rental companies such as Airbnb, Denver does not allow for private, residential swimming pools to be used commercially, according to Department of Community Planning and Development spokeswoman Laura Swartz.

One industry leader, an app called Swimply, has received a groundswell of attention since the start of the COVID-19 pandemic.

There were 14 pools available in the Denver metro area from Swimply on Monday, including two inside city limits. There is another app called Swimmy that operates under the same business model, but it did not list any pools available in Denver.

The city does allow residents to operate home businesses, Swartz said, such as child or adult care, a non-medical office or studio, selling goods online and other similar activities that have little effect on neighbors, such as noise and taking up parking spots.

“A pool rental has a much higher level of external impact,” Swartz said. “Moreover, there are a number of health and safety regulations in place for public swimming facilities that do not apply to residential pools.”

Public pools, such as at apartment complexes, hotels, public recreation centers, hospitals and health clubs, are licensed and routinely inspected for water quality, safety equipment, general cleanliness of the facility and quality of the pool equipment.

BusinessDen contacted Swimply representatives for comment on the city’s rules, but a spokeswoman for the company said it’s their understanding that residential, private pool renting is regulated just like short-term home rentals. Follow-up questions were not immediately answered.

Data on how many citations have been issued related to unlawful home pool rentals were not immediately available from the city. But Denver has issued at least one, in 2020, after one man was told by the city to stop advertising his pool for rent or face a $150 fine per day, 9NEWS reported at the time.

Swimply says on its website the company offers $1 million in liability insurance to hosts as well as $10,000 in property damage insurance. The company takes 15 percent of all bookings.

People are required to let their renters know there is no lifeguard on duty, per the company’s terms of use.

Rates are set by the host, but Swimply also offers support for the customers. The company’s app has a limit of $200 per hour in its search bar.

Swimply was featured on the show “Shark Tank” in March 2020, when owner Bunim Laskin failed to get a “shark” to invest in his company. He was asking for $300,000 for 5 percent of the company, a $6 million valuation of the business.

Swimply said this May that it had closed a $10 million funding round led by Norwest Venture Partners.

Swimply had 14 residential pools in the Denver metro area on its app Monday, including two inside city limits. (Screenshot courtesy of Swimply)

Swimply had 14 residential pools in the Denver metro area on its app Monday, including two inside city limits. But it’s a zoning violation in Denver.