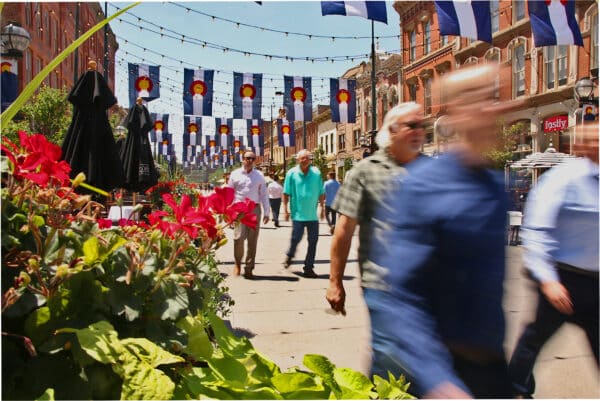 The closure of Larimer Square to pedestrian and non-motorized traffic is an example of urban design that changes an existing use. At the square, restaurants have also extended their seating areas. (Eric Heinz photo)

Denver is creating a position that would specifically focus on urban design to help the city improve public spaces and neighborhoods.

The head of urban design will work with residents, developers and city officials to create public spaces and neighborhoods that “promote inclusivity, resiliency to climate change and improve public health and well-being,” according to the job description posted Wednesday by the Department of Community Planning and Development.

“I think this position is really about going to the next level of urban design in the city of Denver … whether it’s in parks or transportation, but there hasn’t been a person to really help collaborate and bring those voices together,” CPD Executive Director Laura Aldrete told BusinessDen.

Aldrete said the search to fill the position will be both local and national, and that person would report to the executive director.

“We are open to any applicant who meets the qualifications,” she said. “It might be someone local. There are a lot of quality urban designers who know what our neighborhoods want to look like, but we’re open to a new set of eyes from the outside.”

The head urban designer will have a higher “human resources classification, span of control and leadership focus than current or previous urban design professionals within the department,” CPD officials stated.

The head of urban design will follow Blueprint Denver and the city’s Comprehensive Plan 2040 to help implement the goals outlined in those plans, which include city projects and developments.

“I would say that urban design coupled with sustainability, coupled with equity, very much go hand-in-hand,” Aldrete said. “What we’re trying to achieve here is making a richer city, I mean that in beauty and art and context.”

The salary range for the position is listed at $120,198 to $204,336, and the city wants someone with a minimum 10 years of experience in urban design, architecture or city planning.

Aldrete said using and reusing existing infrastructure and buildings will be a focus of the new position.

“There is nothing more sustainable than using what we have,” Aldrete said. “Keeping buildings and landmarks that show our history is very important, architecture that shows us where we’ve been, and it’s a very integrated part of that urban design thinking.”

One such urban design “transformative” project is the National Western Center, planned in Globeville, which is looking to use multimodal pathways to connect that neighborhood with the neighborhood of Elyria-Swansea and to “create a positive benefit for these communities,” according to the development’s website.

The closure of Larimer Square to pedestrian and non-motorized traffic is an example of urban design that changes an existing use. At the square, restaurants have also extended their seating areas. (Eric Heinz photo)