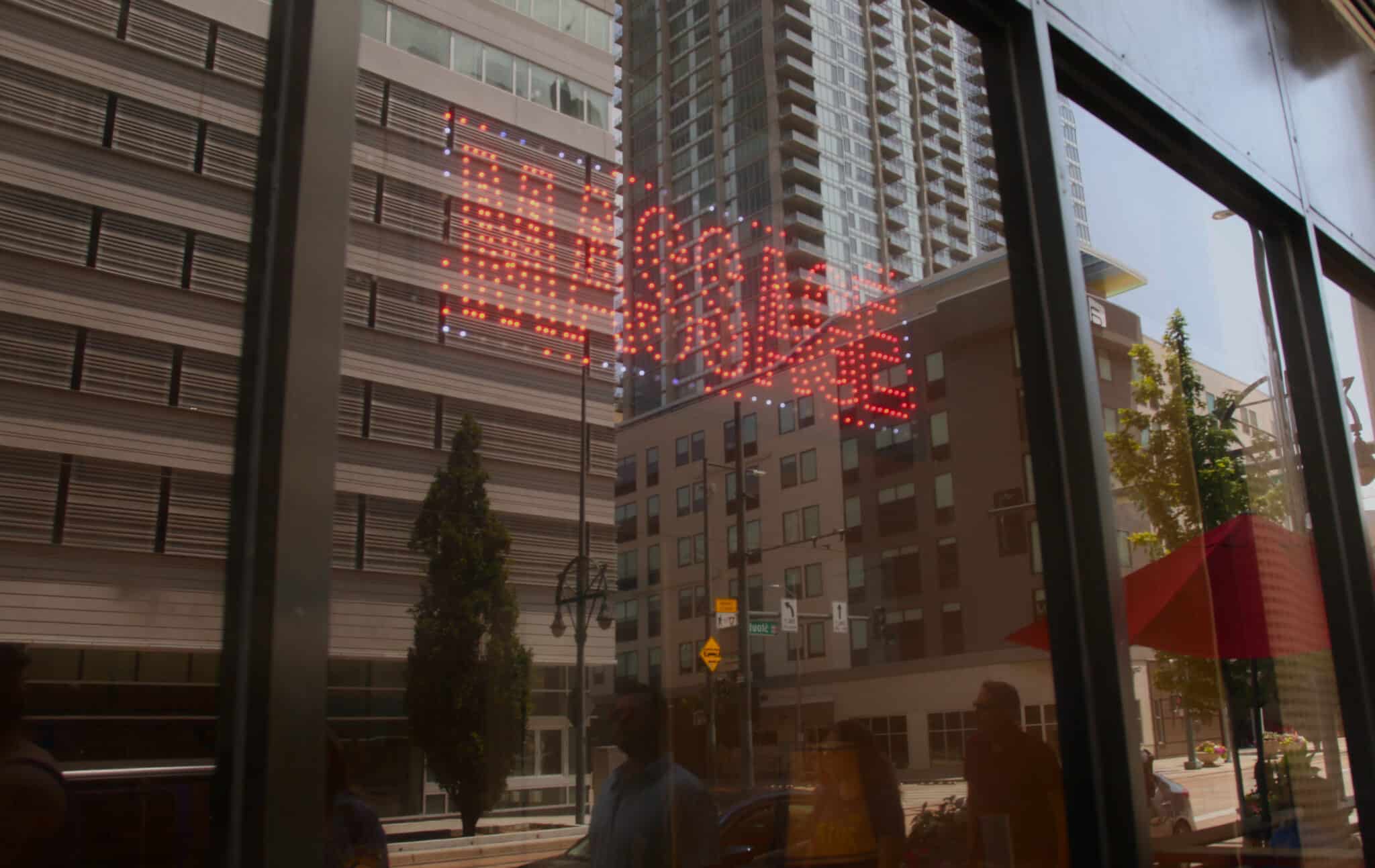 Downtown Denver is reflected in the window of a massage business. The Denver City Council is set to vote Monday on an ordinance that would require massage businesses to obtain licenses. (Eric Heinz photo)

An ordinance that would require massage businesses to obtain licenses in an effort to crack down on human trafficking and labor abuses is scheduled for a Denver City Council vote Monday.

Illicit massage businesses are defined by existing Denver law as those that appear to offer massages when instead, or in addition to, they are selling sexual services or forcing people into labor.

The Denver Police Department requested the ordinance, which would also require a background check on massage business license applicants before they are approved.

The ordinance would require massage businesses to obtain a license by July 1, 2022. A city council committee unanimously voted to forward the ordinance to the full council on June 23.

“When I was first running for office … this fellow asked me, ‘What are you going to do about human trafficking?’ And it just stopped me because I hadn’t thought about that topic at all,” Councilman Paul Kashmann said during the committee meeting. “When we license businesses, it’s usually administrative. But in this case, I would like us to be as proactive as possible.”

The proposed ordinance states one of the reasons the city could deny an application is if an applicant has been convicted of any felony, misdemeanor or municipal offense within the last five years.

DPD Chief of Investigations Division Joseph Montoya told committee members some employees at illicit massage businesses have been living within the buildings where they work.

There are potential fire hazards and unsanitary conditions in these makeshift quarters, Montoya said, as he presented photo evidence of a small room in a massage business where electrical outlets were being misused.

“What we plan to do is continue some outreach with the massage industry and the stakeholders, and … we thought we would connect with the industry to get some awareness about human trafficking,” Montoya said. “Our primary goal is to identify and take care of these victims and get them … resources to improve their quality of life.”

Montoya said in the past, victims would be the ones arrested for prostitution. But the new approach to enforcement would be to target the business, not potential human trafficking victims. The police department established a human trafficking task force in 2019.

City officials said during the committee meeting that there are an estimated 150 massage businesses within Denver that could have to obtain licenses, and that the Department of Excise and Licenses would work with DPD investigators to ensure compliance once the licenses are required.

Businesses such as accredited massage schools, government-owned facilities, athletic training rooms, health care offices, barber shops, solo practitioners and businesses where they provide alternative methods to contact (such as Reiki) would be exempt from the license requirement.

But any exempt business that has a criminal history could be required to obtain a license.

Massage businesses would have to disclose their criminal history and any disciplinary action taken against any prior licenses they may have. Massage therapists are already required to be licensed by the state.

To ensure identification of each employee, massage businesses would have to provide the date of birth of their workers, the start of their employment or contracted services, and their valid massage therapist licenses. Those records would have to be maintained for employees who worked at the massage business within the last five years.

Kashmann said after Aurora passed a similar bill to require massage businesses to be licensed, many of the illicit enterprises moved over to Denver.

“It’s a nationwide problem,” Kashmann told BusinessDen, adding there could be as many as 30 illicit massage businesses in Denver. “I have no intent to push this into anyone’s backyard, but the hope is that the other jurisdictions will follow suit so we can put a cap on these illegal businesses.”

Maria Sumner, the owner of Zen’d Out Massage Spa in the Central Business District, said she would be in favor of the ordinance passing.

“I know it will be a little more of a charge for us, but I mean, I’m down for them to really (help) professional businesses,” Sumner said.

BusinessDen contacted seven other massage businesses seeking comment, but none of them returned calls before press time Friday.

The council will meet at 5 p.m. to hear public comment and at 5:30 p.m. for the general meeting.

Downtown Denver is reflected in the window of a massage business. The Denver City Council is set to vote Monday on an ordinance that would require massage businesses to obtain licenses. (Eric Heinz photo)

A measure requested by the police department to stop human trafficking and other illicit activities is set to be voted on Monday by the City Council.