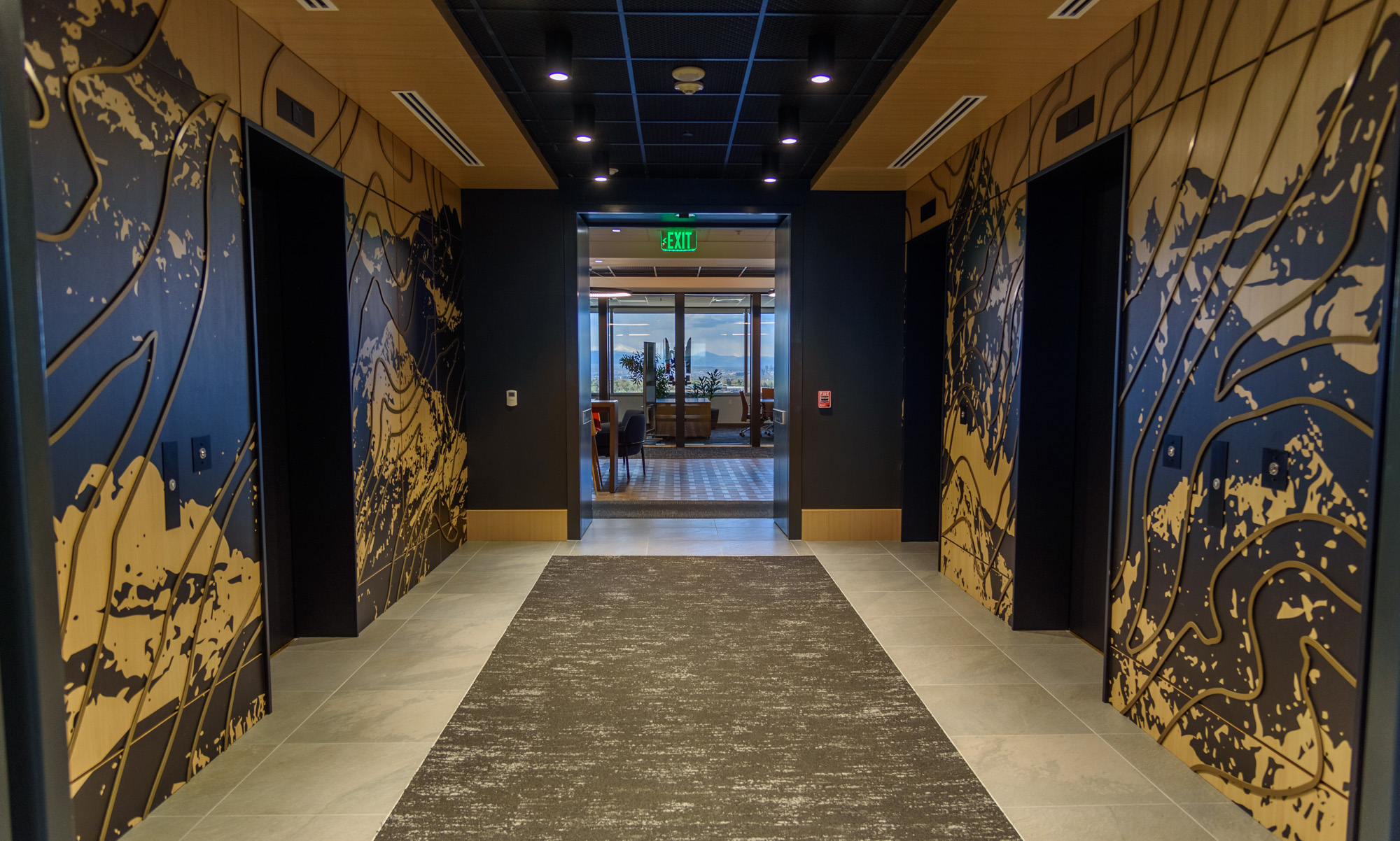 The elevator lobby on the 12th floor of Re/Max’s headquarters building at 5075 S. Syracuse St. in Denver. (Photos courtesy of Re/Max)

Re/Max is slimming down the square footage of its Denver Tech Center headquarters as the company embraces flexible work arrangements for its employees.

But a move that might appear to have been prompted by the pandemic was already in the works before then, according to an executive.

Susan Zimmerman, senior vice president of human resources, told BusinessDen the real estate brokerage franchisor is set to use five floors of its office building at 5075 S. Syracuse St. in Denver, down from nine previously.

As part of that, the company has been renovating four of the floors it will use. 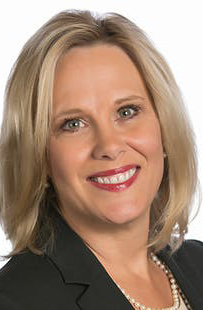 “We’re about 50 percent done with the last two floors, and 100 percent finished with the first two floors,” Zimmerman said in early June, adding work would be completed by the end of the summer.

Zimmerman said CBRE and Re/Max Commercial are marketing the four floors that Re/Max is giving up for sublease.

Re/Max actually leases the entire 12-story building, and has already subleased some of it previously. The structure was last sold in 2018 for $115 million to Greenwood Village-based KORE Investments.

Zimmerman said Re/Max historically wanted employees working from the office, but loosened up that policy two years ago.

“In 2019, we started a remote work program,” she said. “We’d never really worked remote before, and allowed employees a greater flexibility in their schedules and where they prefer to work. We just had a great response. Employees just absolutely loved it.”

At the same time, the company wanted to “refresh” its space in the building, which it moved into back in 2008. So it decided to make upgrades with the work-from-home flexibility in mind.

March 13, 2020, was the day that Re/Max employees were cleaning out their offices so construction could begin, Zimmerman said. It was also right around the time that stay-at-home orders were being issued.

The original plan had been just to shift employees to work on different floors. That didn’t happen.

“We anticipated that most employees would be working from the office during construction,” Zimmerman said. “But as it turned out, no one was except for construction workers.”

The pandemic did prompt some minor changes to the renovations, mostly in terms of increasing the space between workstations and using materials that are easy to clean, Zimmerman said. 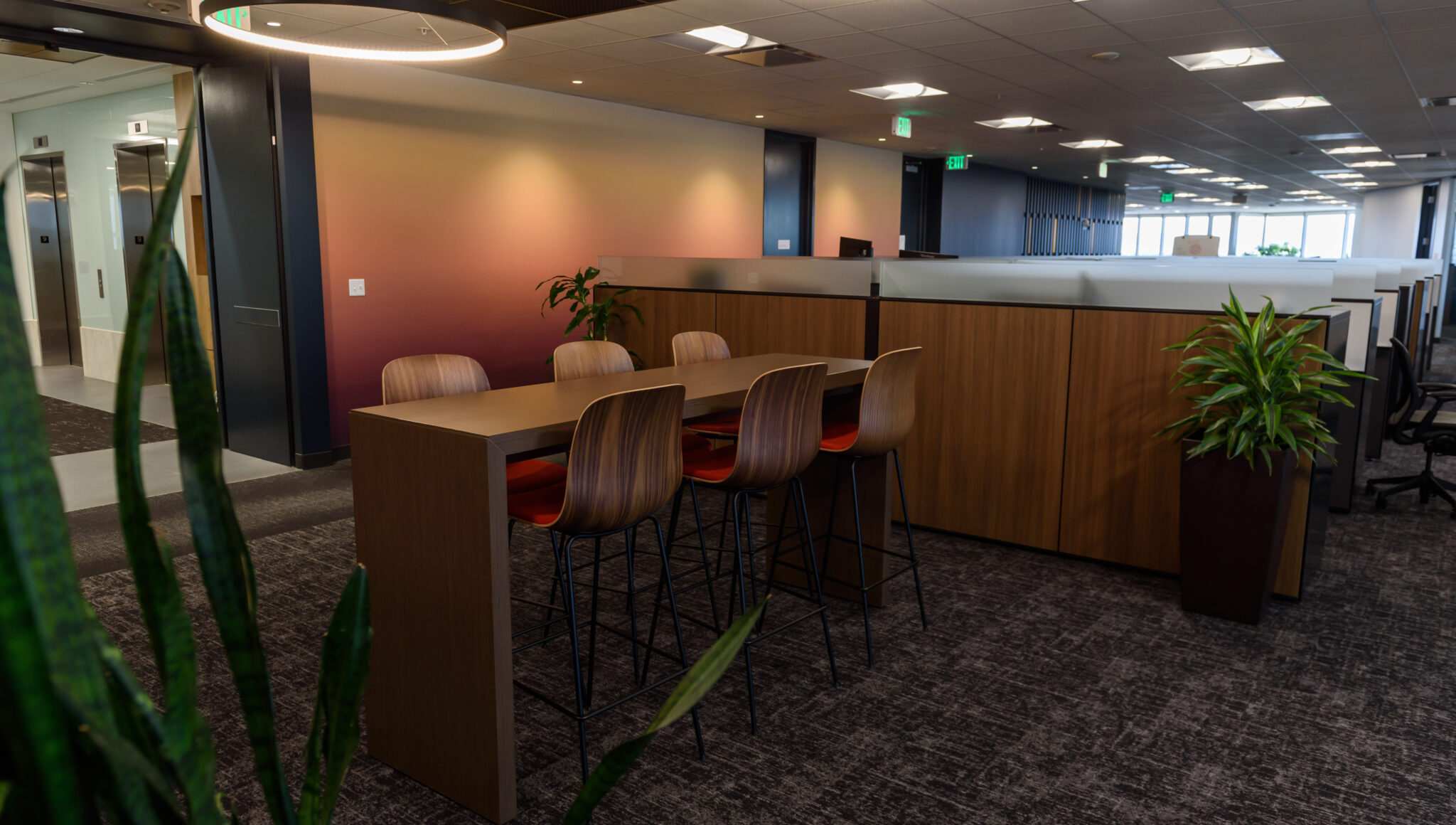 A meeting space on the 9th floor of Re/Max’s headquarters building.

When everything is completed, Re/Max’s new space will have 56 private offices and 337 total workspaces. Seventy-three areas are considered “meeting spaces,” from sofas and phone booths to conference rooms.

Those conference rooms, by the way, are named after everything from Re/Max sales award levels (“100% Club”) to the company’s philanthropic efforts (“Craig Hospital”) to the German shepherd owned by the company’s founders Dave and Gail Liniger (“Max”).

Employees who don’t have an office can use software to reserve whatever workstation they want.

“If they want the morning sun or the evening sunset, they can have that,” Zimmerman said. “They can sit next to coworkers or they can sit far away if they need more privacy or more heads-down work.”

Re/Max has about 600 employees, and said it expects its office to regularly host about 280 employees, with the remainder working from home. In some cases, those employees aren’t even local. The company said about 150 people work for the company from out of state.

“That’s new for us,” Zimmerman said.

Last month, Re/Max sued Washington-based competitor eXp Realty, saying the company has “induced” multiple Re/Max franchisees to “abandon” their franchise before the end of the contracted term. The case has since been moved from state to federal court.

The elevator lobby on the 12th floor of Re/Max’s headquarters building at 5075 S. Syracuse St. in Denver. (Photos courtesy of Re/Max)

The company is going from nine floors to five at 5075 S. Syracuse St. and expects to regularly host about 280 of its 600 employees.