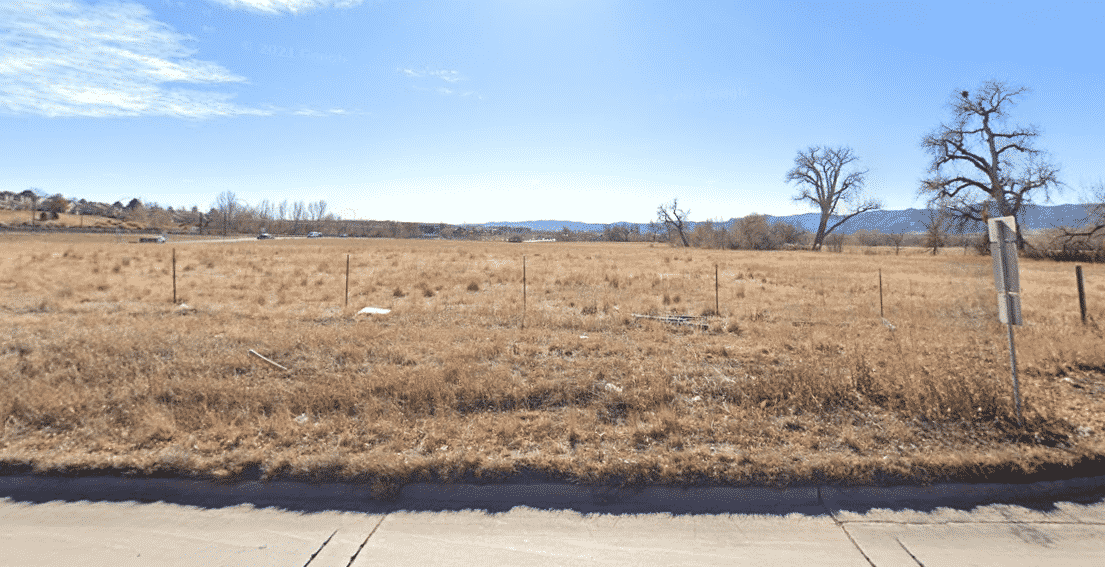 The rejection of a rezoning request for a proposed development at the southwest corner of Mineral Avenue and Santa Fe Drive in Littleton is the subject of a lawsuit against the city. (Courtesy of Google Maps)

A development firm that owns 33 acres across the street from a light rail station in Littleton has sued the city after its bid to rezone the property was rejected last month.

Arizona-based Evergreen Devco, which has an office in Denver, filed the lawsuit against Littleton and its City Council in Arapahoe County District Court on May 31. A spokeswoman for the city didn’t respond to a request for comment by press time.

The lawsuit revolves around land at the southwest corner of Mineral Avenue and Santa Fe Drive, which Evergreen purchased in 2017 for $6.5 million, according to public records. The land is kitty-corner to RTD’s Littleton / Mineral Station, and across Mineral Avenue from the station’s Park-N-Ride.

According to the lawsuit, the land is currently used for agricultural purposes, but has been zoned “Planned Development – Commercial” since 1985, when the “Santa Fe Park Planned Development Plan” was approved. That plan was amended once in 1993.

Evergreen says in its lawsuit that it applied for a second amendment to the development plan — essentially a rezoning — in October 2018, and that it worked with Littleton city staff to revise the application throughout 2019 and 2020.

According to the Littleton Independent, Evergreen wants to build a project called Riverpark at the site, with 270 apartments, a 170-bed retirement home, stores and restaurants.

The development plan currently in place for the site allows apartments only on the east side of the property, but Evergreen wants to build them on the west side, according to the lawsuit. The desired rezoning would also allow for the assisted living use and more drive-thru businesses.

“Evergreen described the evolution of the application from its start as a more residentially-oriented plan with higher density, that did not meet the city’s revenue goals, to an application that focuses on furthering the city’s long-term revenue goals, mitigation existing regional traffic issues, and solving existing drainage and wetlands problems,” Evergreen says in its lawsuit.

Evergreen’s application for the amendment was approved by Littleton’s Planning Commission in January by a vote of 6-1, according to the lawsuit. It was then forwarded to the council, with city staff recommending approval.

An initial vote scheduled for April 20 was tabled over parking concerns, with Littleton officials suggesting the project should build a parking garage and reduce the number of surface parking spaces, according to the Littleton Independent. A garage would be much costlier, and Evergreen Managing Partner Tyler Carlson — who leads the Denver office — referred to the suggestion as “a zoning act of war against our property.”

“I won’t be sucker punched in the face on a parking standard that is fairly arbitrary and contrived, doesn’t exist anywhere in the metro area, or the entire Front Range,” Carlson said at the April 20 meeting, according to the Littleton Independent. “I cannot build it. I’ve told you that a million times. The residential residents can’t afford it. The commercial tenants can’t afford it. This property will continue to sit vacant.”

City staff subsequently agreed to help line up funding partners for a possible garage, according to the newspaper. But it wasn’t enough to win over the council, which voted 5-2 on May 4 to reject the application, according to the lawsuit.

Evergreen is asking the court to determine that the council “exceeded its jurisdiction and acted arbitrarily and capriciously” in rejecting the application, and to rule that the rezoning must be granted.

In its lawsuit, Evergreen highlights multiple comments by council members that the company says show they were not judging the application by the correct criteria.

That includes Councilmember Scott Melin saying he did not want to see “just another strip mall development,” that assisted living units are “not unambiguously housing” and that the planned market-rate apartments would be “bordering on luxury.”

Evergreen has developed several retail buildings in the Denver area. Among the company’s other projects in the works locally is Runway 35, a pair of mixed-use projects along Central Park Boulevard north and south of Interstate 70 that the company is planning with Denver-based Wall Development. Fast food chain In-N-Out has proposed a restaurant within the project.

The rejection of a rezoning request for a proposed development at the southwest corner of Mineral Avenue and Santa Fe Drive in Littleton is the subject of a lawsuit against the city. (Courtesy of Google Maps)

Evergreen Devco, which bought the ag land near a light rail station for $6.5 million, wants to build apartments, a senior housing facility, stores and restaurants.