Aaron Walls, left, and Brett Vegas appeared on ABC’s “Shark Tank,” but walked away without an investment for their BeerMkr machine. (Photos courtesy of BeerMkr)

Aaron Walls and Brett Vegas knew they’d receive some pushback from the investors on ABC’s “Shark Tank” when they pitched their Boulder-based startup with a $25 million valuation.

BeerMkr, a countertop home brewer that makes a gallon of commercial quality beer in 12 days, had not yet hit the market. But the founders were hoping their product would convince the “sharks” to bite. They came in asking for a $500,000 investment for 2 percent of the company, which received a few raised eyebrows and laughs in response.

“‘Shark Tank’ has a tendency to rely heavily on sales as a metric for valuation. But we were still working on fulfilling our Kickstarter orders, so it was different for us,” Vegas said. “We were in a weird position where we had incredible technology and a huge potential to disrupt a $100 billion domestic beer market. So, we went in with a high valuation knowing full well we would get yelled at.”

After applying for “Shark Tank” on a whim last year, Vegas and Walls appeared, ice-cold home brews in hand, on Friday night’s episode of the network reality show, which features entrepreneurs pitching their products to a panel of five investors, or “sharks.” The episode was filmed in September.

And the co-founder’s expectations were met. Four out of the five sharks pulled out due to the company’s lack of sales.

And the pair turned down an offer from Kevin O’Leary, or “Mr. Wonderful,” for a loan in exchange for a higher stake in the business than what they were seeking.

“Ultimately, we felt fine since we were able to validate the product and showcase it on a national level,” Vegas said. “Honestly, their decision was completely fair because it’s difficult to assign that valuation and that forecast to an item that’s not in the market yet. If they don’t believe the risk is worth the potential, then we will just have to prove them wrong.”

Tapping into the brewing industry

The idea for BeerMkr evolved from a class project at Cornell, where the founders met, including Matt Goff and Evgeniy Tkachenko, the engineers behind the business.

Walls had started brewing his own beer in college, and in an entrepreneurial class with Vegas, the two came up with their first product in 2013 called the BrewJacket, a temperature-control device for homebrewers who already have their own fermentation tanks.

After graduating from Cornell’s graduate school, Vegas said it became difficult to find time to fit homebrewing into their schedules, which now included a wife and kids. So, they came up with the idea for BeerMkr, an “idiot-proof” homebrewing machine that does the grunt work for you in 12 days. They brought on Goff and Tkachenko, Cornell space engineer graduates, to help them design it.

“There’s a niche community of homebrewers in the U.S. because the process is so complicated, laborious, and takes a ton of time and equipment to make good beer,” Vegas said. “The normal process takes around three to eight weeks, and the horror stories include beer exploding or tasting terrible in the end. We wanted to make this inaccessible hobby accessible for anyone.” 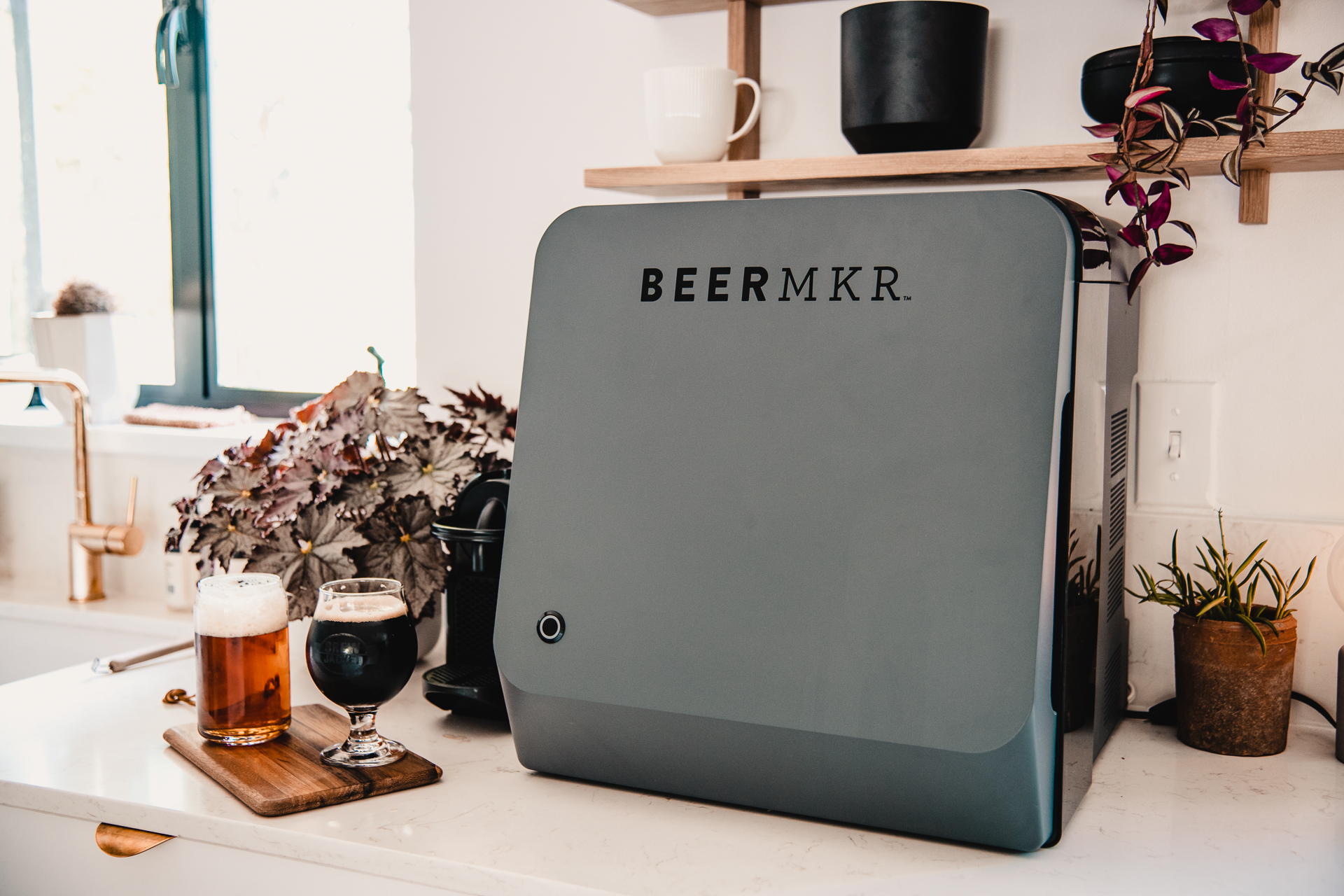 Customers can purchase a BeerMkr machine, which comes with a beer tap and a selection of one of 14 MKRKits, which includes a pre-made recipe for craft quality beer, for $579 on the company’s website. Featured recipes, which can be bought individually for $15, include a chocolate stout or a New England IPA.

To start, homebrewers connect an empty bag to the machine, where they pour in the grains and fill the machine with water, before pressing the button on the front to begin brewing.

Then over a period of 24 hours, the machine increases the temperature inside, mashing the grains and liquid and creating a wort, or sugary liquid.

Customers then get a notification on an app when it’s time to remove the used grains and add in the yeast and hops. They can also throw in “some rosemary or sage from their garden, or whatever else they want to be creative and test a new flavor out,” Vegas said. “There are no limits.”

BeerMkr then controls the pressure and temperature inside the unit over the next five to seven days. When it’s complete, brewers get another notification from the app. “Sort of like the Keurig of beer,” Vegas said.

The bag of clean, fermented beer is then brought over to the tap and installed by screwing in an included CO2 cartridge. About a day later, customers have a 12-pack’s worth of homemade, cold, carbonated craft beer.

“Brewing is thousands of years old, and a lot of commercial brewing businesses are still doing the same thing. So, we just did what most startups do and questioned the assumed way of doing things,” Vegas said. “We started from scratch when it came to brewing science and technology and figured out the best way to get beer without all the extra steps.”

The founders spent a couple of years investing in research and speaking with brewers around the country, before launching BeerMkr through a successful Kickstarter campaign in 2018. They raised $398,276 and sold 1,200 units, which they fulfilled later in September 2020. They also raised capital from Boulder-based Sage V Ventures.

“The product was 95 percent complete when we introduced it in 2018, but it takes a lot of hard work to get it from 95 percent to 100 percent,” Vegas said. “We also ran into issues with the trade war with China, as well as supply chain problems during COVID.”

Despite walking away without a deal in hand, Vegas and Walls are confident in their $25 million valuation of BeerMkr.

“What it came down to was what we thought were reasonable sales, you know how many units we had to sell and how many Mkr kits, and it didn’t take many to hit a $25 million valuation,” Vegas said. “If we sold 10,000 machines, we could easily hit $5 million, and we had already sold 1,000 in a month through our Kickstarter.”

But the sharks were not so convinced.

Barbara Corcoran was the first to pull out, remarking that the deal is like “asking us to believe in the fairy godmother.”

“You have virtually no sales,” she added. “You have $3 million put into it already, and you have no proof of concept even. I must be missing something basic, but I’m out.”

Lori Greiner was next, adding that “everything tasted good,” but she can’t invest in something that hasn’t been in consumers’ hands yet.

Mark Cuban agreed and said they were on the right track, but “even if the valuation is in the realm of where you say it is, it’s going to be hard to generate enough profits to give me a return.” And celebrity guest investor Alex Rodriguez declined as well, adding that the high offer initially turned him off to the deal.

On the other hand, O’Leary, who said he considers himself a “reasonable man” and “connoisseur of all things with alcohol in them,” decided to take a chance on the product.

“My inner instinct is to eviscerate you, but I’m not going to do that because I think it’s so interesting,” O’Leary said. “So how do I encapsulate this ridiculous valuation but still be a partner with you?”

O’Leary offered Vegas and Walls a $500,000 loan with 9 percent interest for 4 percent equity in the company.

“I would do that deal, and you should seriously consider it because you’re not going to get a deal from anybody else,” O’Leary said “What do you want to do?”

In the end, Vegas and Walls weren’t comfortable with the debt portion of the deal and decided to walk away.

“If we lowered our valuation, we probably would have gotten more interest, but with the amount of time and money we had put into this, we weren’t comfortable giving away that much of our company,” Vegas told BusinessDen. “We’re a young company, and it would be too hard to be strapped with more monthly payments.”

After BeerMkr appeared on ABC, Vegas said site traffic increased from a few hundred visitors a day to around 8,000, and sales are following suit, although he would not disclose how many machines have been sold.

“The timing of the show was unfortunate because we were so close to launching and having sales, but since then we’ve developed from being an idea into a real business,” Vegas said.

“From a marketing standpoint, the biggest challenge we have is getting our message to audiences that aren’t homebrewer focused, so this gave us the opportunity to show our product to everybody,” he added.

Aaron Walls, left, and Brett Vegas appeared on ABC’s “Shark Tank,” but walked away without an investment for their BeerMkr machine. (Photos courtesy of BeerMkr)