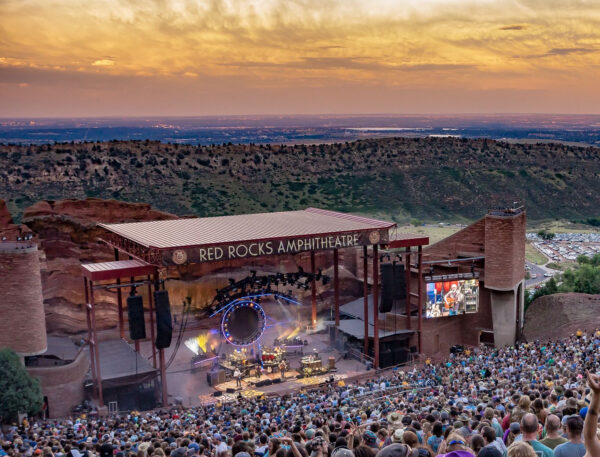 Photos courtesy of Arts and Venues.

Red Rocks Amphitheatre was among the hardest hit venues when the pandemic struck.

The city-owned outdoor concert hall in Morrison had revenue of about $2 million in 2020, according to a city spokesman, down 96 percent from the previous year.

“The total loss of revenue? Well the 2019 number was $52 million,” said Brian Kitts, spokesman for the city’s Arts and Venues Department. “That’s at Red Rocks alone.”

And while Red Rocks is starting to see more activity, the current capacity restrictions have prompted the city to alter how it charges acts.

Arts and Venues is a special revenue fund, which means the department essentially operates in its own little bubble inside city government. Special revenue funds are self-sustaining; they don’t draw money from the general fund or the mayor’s budget, but are funded out of their own intake. Denver Golf is another prominent special revenue fund in the city.

Red Rocks alone puts on about 160 shows in a normal year, packing its capacity of 9,545 as often as possible.

In a regular year, Red Rocks charges a rental fee — $7,500 a night in normal times — to a given act to have access for a night or more, but doesn’t take a cut of the ticket prices like some venues do. It takes some from parking and concessions, too, but the baseline revenue is the rental fee.

“That means if a show bombs, for instance, we’re not on the hook for it,” Kitts said. “A promoter is. That allows us to have consistent revenue and know what we’ll get. If the show bombs, we still get the rental fee.”

These days though, with limited-capacity events the only option at the venue, Red Rocks is charging acts a percentage — between 10 and 12 percent, he said — of a show’s gross take.

The venue will likely return to the traditional nightly rate when capacity is no longer restricted, he said.

But it’s better than it was. Last year, with no shows coming after early March, it was belt-tightening time for the Arts and Venues Department, which also operates several other venues, including Denver Coliseum, Denver Performing Arts Complex, the McNichols Civic Center Building and the Colorado Convention Center.

“We went basically into hibernation mode last year,” Kitts said. “That meant, where the city had furlough days with everybody getting, I think, eight days during the year — see, we don’t have a choice to go to the mayor and say we need more money. We had to preserve ourselves. That meant all of our staff got furloughed at some point for several weeks.” 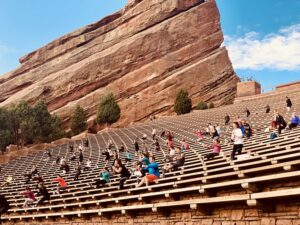 Yoga on the Rocks.

While there were small events at the amphitheatre like Yoga on the Rocks and drive-in movie nights, those were break-even propositions, Kitts said. Even the yoga events were drastically scaled back, with just 175 yogis stretching out across a space that typically sells 2,000 tickets per session.

“It was just to keep things moving around,” he said. “You’re not making a ton of money.”

Meanwhile, the roughly 400 people per night that staff the venue 160 nights a year were out of that particular job.

“People think about the folks on the stage, it’s not just them,” Kitts said. “It’s everyone adjacent to it. Caterers, florists, guys delivering beer, stagehands, lighting and rigging crews, costumers, all that. And bars are affected, venue staff is affected. Parking attendants, concessionaires, security. All that was gone overnight.”

Now, the music is back, even if only a few can hear it.

Limited-capacity shows have returned to Red Rocks in recent weeks, with a 2,800-person maximum capacity, almost 30 percent of the typical full house. And the venue is only charging the deeply discounted cut of the proceeds for shows with that few tickets available, Kitts said.

But, emotionally, having performances ringing throughout the ancient sandstone is worth whatever it takes to get them there, Kitts said.

“It’s every emotion you might expect. It’s relief, it’s hope that your industry is coming back, and I’d say there’s a little bit of regret, just like the rest of the world, for all the things you’ve lost,” he said. “But overall, there’s a sense of joy. This past week, I’ve seen colleagues I’ve not seen since last March. And I do feel hopeful.”

Photos courtesy of Arts and Venues.

The city-owned venue, which made $52 million in 2019 and only $2 million in 2020 due to COVID, now charges acts a percentage of the door. It previously charged a flat nightly rental.