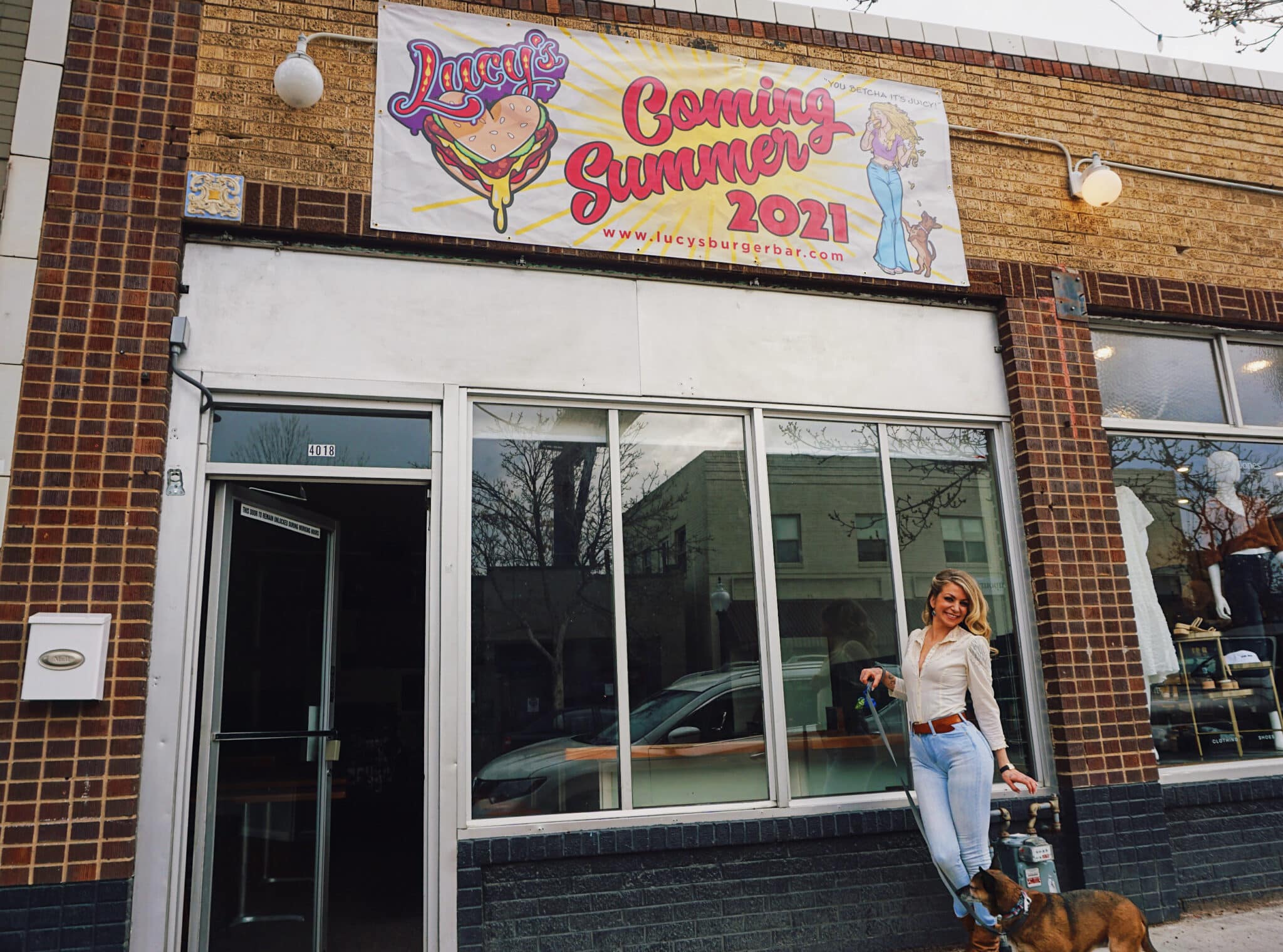 Michelle McGlone, co-owner of Lucy’s Burger Bar, had an artist design the graphic on the sign after herself and her dog. (Lily O’Neill photo)

Now, McGlone said, the longtime friends and business partners “want to bring 1,000 square feet of our hometown to Denver.” That means opening a restaurant specializing in the signature item at Matt’s — the Juicy Lucy, a burger with cheese in the middle of the patty instead of on top.

“A Juicy Lucy is like a lava burger,” McGlone said. “You always have to cut it. You can’t just eat into it or you’ll burn your mouth. That’s how you know it’s a good one.” 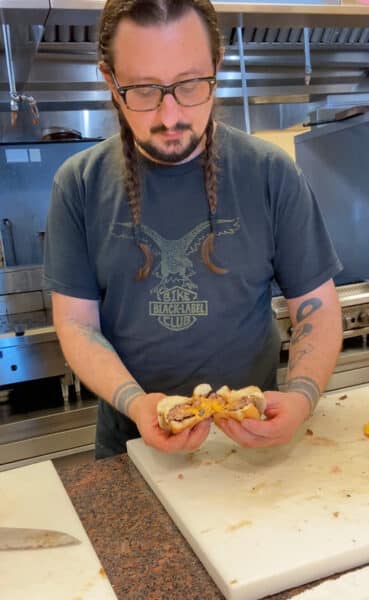 A “Juicy Lucy” burger features a patty stuffed with cheese rather than on top. (Courtesy of Lucy’s)

Lucy’s Burger Bar will open this summer at 4018 Tennyson St. in Berkeley, where Nug Nugs Diner and Kyle’s Kitchen used to operate.

“I loved Kyle’s Kitchen, and I used to eat there multiple times a week, as well as Nug Nugs, so even though we’re putting our own twist on it, it will still have that same cute, quaint diner feeling,” McGlone said.

In addition to the Juicy Lucy, the restaurant will also serve traditional burgers, chicken sandwiches, grilled cheese, black bean burgers and fries. Customers will be able to finish off the cheesy goodness with a drink from the bar.

McGlone and Collis plan to operate it on their own to start and will be found manning the grill most of the time, she said. The restaurant will be open daily from 11 a.m. to 11 p.m., but McGlone said they eventually plan to make it a late night spot for the neighborhood.

“I live on Tennyson down the street, so this is my neighborhood, and I know there is no food, especially burgers, nearby after 8 or 9 p.m.,” McGlone said. “I wanted to first offer a buffer zone and, if demand gets higher as restrictions lift, we will adjust as needed.”

McGlone previously worked as a manager for Tap & Burger in Sloans Lake and the Highlands. Before that, she was a professional aerialist and circus performer for a number of years. And Collis is the former guitarist for hip hop duo Atmosphere, which started in Minneapolis.

The two had always talked about starting their own business together, and McGlone’s dream was to open a burger and cocktail bar with aerial performers. But when she saw how much her vision would cost, she decided to simplify it.

McGlone hired Juan Padro, the founder of Culinary Creative restaurant group that owns Tap & Burger, and his team as consultants to help guide her through the process of opening a restaurant.

“This is my first place, and I still want to do the cocktail bar down the road, but I could tell I would be biting off more than I could chew,” McGlone said. “I didn’t want it to be an expensive hobby. I want it to be a real success, so this is more accessible for me and the public.”

“And we’re happy to be under Culinary Creative’s tutelage,” she added. “They pretty much have the Midas touch, especially for burgers.”

Kyle’s Kitchen, a popular Berkeley breakfast spot, operated at the location from 2004 until last January. That’s when owner Kyle Janes sold the business to Lisa Sanchez, who also owns Berkeley Inn down the street and Firefly Saloon in Wheat Ridge. 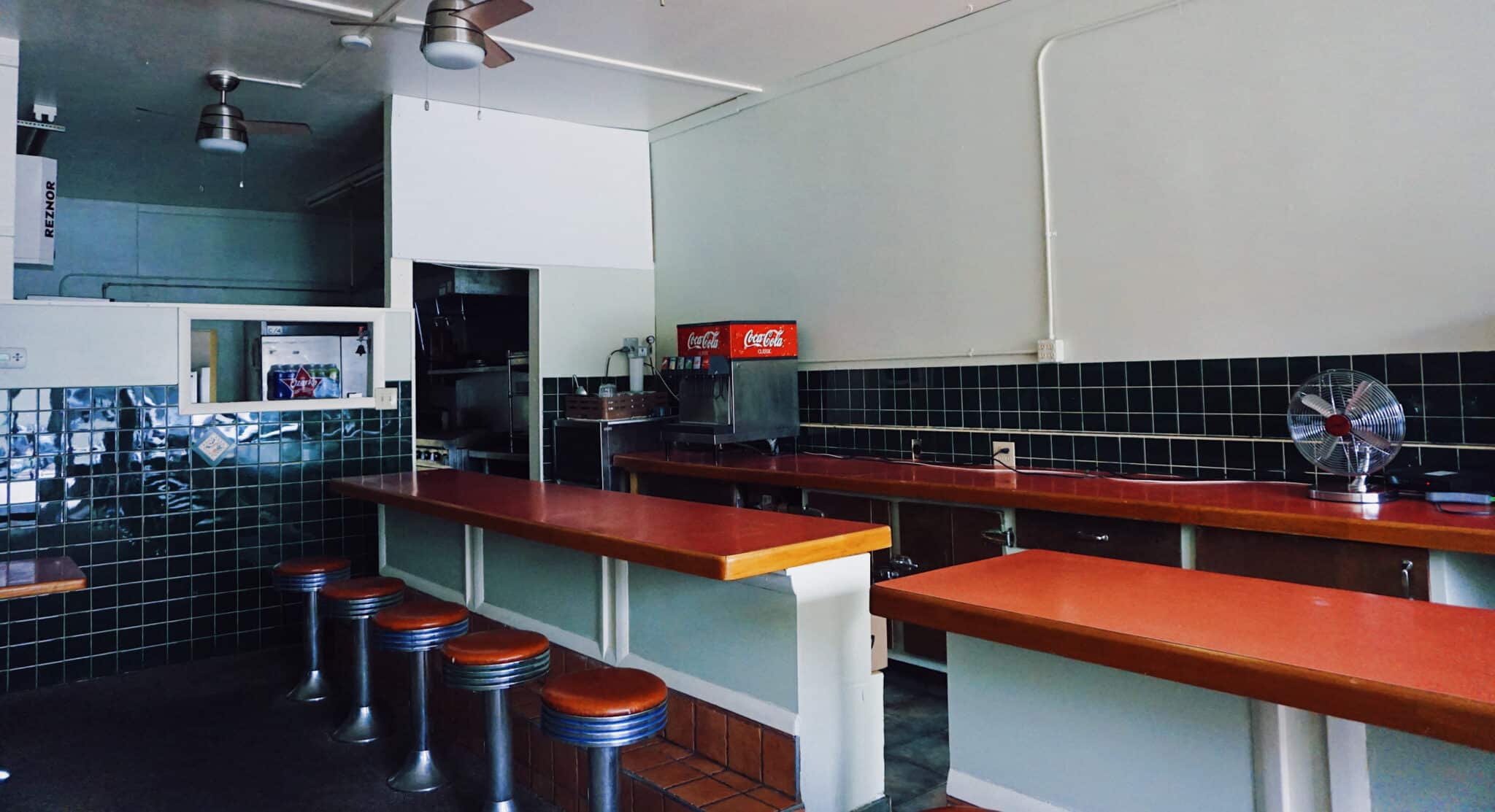 Nug Nugs Diner closed in December, one year after opening under that name. (Lily O’Neill photo)

One year after taking over and renaming it Nug Nugs Diner, Sanchez decided to sell. She told BusinessDen that the COVID restrictions made it too hard to operate with limited seating, and “no one was coming to eat breakfast on the patio in the winter.”

“My broker kept checking in on a number of places, including Nug Nugs, and we just sort of became a squeaky wheel. So, we found out about the sale before it had gone on market,” McGlone said.

Michelle McGlone, co-owner of Lucy’s Burger Bar, had an artist design the graphic on the sign after herself and her dog. (Lily O’Neill photo)

“You can’t just eat into it or you’ll burn your mouth,” said a co-owner of the burger with cheese in the middle. “That’s how you know it’s a good one.”