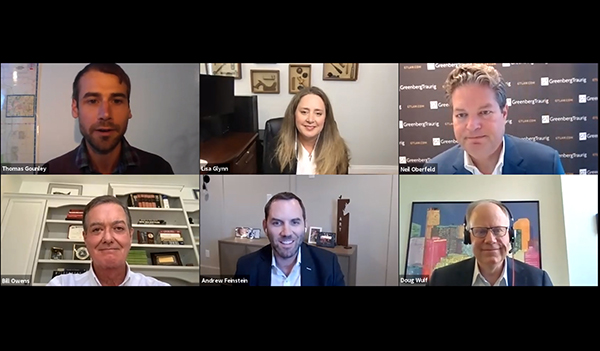 BusinessDen readers went online Thursday morning for The Future of Real Estate Taxes, a panel discussion on property taxes that comes as county assessors throughout Colorado send out notices of new valuations.

Below are some key quotes from the discussion:

“There are two great options (if you receive your valuation and feel it is too high). First is do it yourself, and second is call an attorney. If you want to do it yourself, you have the opportunity to sit with an assessor and discuss the valuation. They want information and statements, and you have to be careful not to give the assessor information that could hurt you and end up with a higher valuation. Otherwise, you can call somebody with experience.”

“(Following the repeal of the Gallagher Amendment last November), it’s an environment now where residential assessment rates no longer ratchets down each year, and that’s going to provide commercial property owners with a well-deserved break. But it almost guarantees residential owners will pay higher taxes. Those two factors will impact the taxes borne by residential property owners, and that will affect the electorate in future years.”

“One interesting dynamic is commercial property owners don’t vote in the county. Residential owners are voters. So you see in the past the burden on commercial owners because elected officials are smart enough to know who votes for them.”

EXDO Group is a major landowner in RiNo, where it also co-develops projects. The firm also owns the EXDO Event Center.

“In RiNo it’s a double-edged sword — nobody feels bad for us because our land values have skyrocketed, in large part because of 38th and Blake, the train station in our area, the densification of RiNo has accelerated land value. The assessor has almost universally assessed our property on comparative value — not our income. If you’re in the hospitality business, it’s pretty hard to forecast your budget when property taxes go way up.”

“Due to high assessments, assessors are almost forcing longtime owners to make a decision to redevelop property. It’s skyrocketed so high it penalizes mom and pop businesses in the RiNo Arts District. Artists displaced, small businesses displaced — and the customer pays the tax, not the landlord.”

“A lot of independent landlords, by which I mean not institutional landlords, not the Hines or Crescents or McWhinneys, just mom and pops, they own a one-story building with their business and they’re forced to sell much sooner than they anticipated. Granted, they do well financially from a sale, but it’s not easy to relocate a business. Their one-story warehouse is taxed like an eight- or 16-story building across the street.”

“I’ve won almost every appeal in some form or fashion. Sometimes it was a negotiation, didn’t get as low as we’d hoped. But we reduced our valuation enough to significantly affect our taxes, and I’d call that a win.”

“We are expecting increases in valuations. I haven’t seen every county’s notice of valuation yet, but I’ve seen Jefferson’s and those went up. Some will go up significantly, some were minor value increases. And we absolutely will be appealing.”

“Organizations need to be coming in with a clear presentation: Page numbers, sequentially ordered, stapled together, produced in a manner personal to your business and property. But exhibited in a professional way that can be followed along with your logic. Coming together with information on income and expenses and hardships — because hardships attached to the pandemic tell a story as of June 30. The key is to be organized when you have that discussion.”

“A big misnomer is that developers can afford more property taxes because they’re well-to-do. What people fail to realize is property taxes are passed on to tenants. Struggling retail tenants, office users, they pay the taxes.”

“Generally speaking, tenants are well-informed and fully cognizant of tax burdens at different properties and how they’re assessed. New buildings have an artificially low tax assessment as they’re being built. Then, once it’s completed, it’s got one of the highest you’ll see, compared to a 40-year-old building. Sometimes that’s 25 to 50 percent more tax burden that’s assessed at a brand-new building.”

“Property taxes and operating expenses are trending toward $25 per square foot. That’s relative to $60-per-square-foot occupancy rent. Of that $25, $13-$16 is taxes. That’s among the highest in the country. It’s as high as San Francisco, Chicago, New York. But the difference is they have much higher rents — $60-$80 rents.”

Owens was governor from 1999-2007, and state treasurer before that.

“What sometimes we don’t understand, those of us who vote as citizens, is Colorado is heavily dependent on property tax at the state level. The state is a relatively moderate taxer, we’re in the midrange of states in terms of taxes. But in terms of property taxes, we’re very very high. That has a real impact on business.”

“With the repeal of Gallagher, when those taxes hit it’ll be very significant. Property taxes, they’re starting to become more topical. There’s a property tax reduction proposal headed for November’s ballot. I’m not involved in politics much anymore, but I remain a fiscal conservative, and I watch those things. There will be a proposal on the ballot to reduce property taxes across the board 9.5 percent.”

“Residential has largely been sheltered the last 25 years from property tax increases, and the removal of Gallagher will see these voters — we vote from our residences, not from our offices — you’ll see property taxes become almost a lightning rod issue into the future because of that shift. We’ve seen it in California and other states. Here, because the burden’s been disproportionately on business, and business can’t vote, voters haven’t worried about higher property taxes because they were sheltered by Gallagher. That’s gone, so if governments continue to increase property taxes, you’ll see an effect, I think, as early as this November. It’s going to make property taxes more political.”