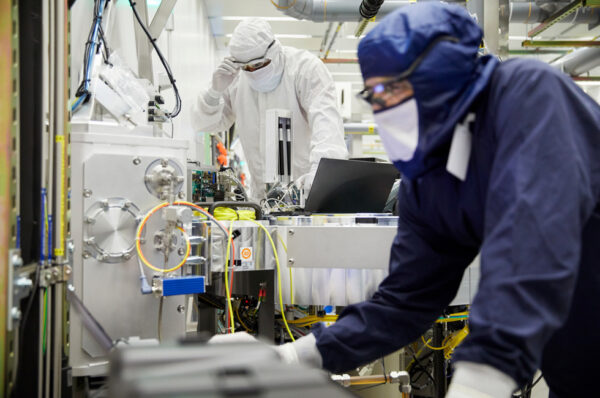 Apple will add 700 jobs in Boulder as part of a $430 billion investment in the U.S. Courtesy Apple

Apple will expand to 700 jobs in Boulder as part of a nationwide investment of $430 billion in U.S. projects and addition of 20,000 new jobs nationwide over the next five years.

The announcement constitutes an increase in Apple’s previously announced five-year U.S. investment goal of $350 billion, an announcement made in December 2018.

“At this moment of recovery and rebuilding, Apple is doubling down on our commitment to U.S. innovation and manufacturing with a generational investment reaching communities across all 50 states,” Apple CEO Tim Cook said in a prepared statement. “We’re creating jobs in cutting-edge fields — from 5G to silicon engineering to artificial intelligence — investing in the next generation of innovative new businesses, and in all our work, building toward a greener and more equitable future.”

The expanded investment goal marks a 20 percent increase from that earlier goal and includes “tens of billions of dollars for next-generation silicon development and 5G innovation across nine U.S. states,” the company said.

That 2018 announcement included a vague announcement that Apple would add “hundreds of jobs” in Boulder. BizWest previously reported that Apple had taken space in the 5300 block of Sterling Drive.

“Boulder has been a great city to build a team, and we’re thrilled to continue expanding our engineering teams here,” Kristina Raspe, Apple’s vice president of worldwide real estate and facilities, said in a statement emailed to BizWest. “We’re proud to be a part of this vibrant community and to contribute to the city’s long-term job creation and economic development.”

The exact location for Apple’s expanded Boulder operation was not immediately clear, but there are several options that could fit the company’s needs.

Based on real estate norms for tech employers of 150 square feet per employee, Apple would need more than 100,000-square feet of office space to house 700 employees. That square footage requirement could ultimately be much higher should Apple decide it needs more per capita space for a post-COVID-19 office environment.

The company already occupies about 40,000 square feet at 5360 Sterling Drive.

There are adjacent buildings on either side of the Sterling Drive offices that total another nearly 50,000 square feet. Those buildings are occupied by MKS Instruments Inc. but could provide additional space for Apple should the current tenants vacate.

In the nearby Flatiron Park campus, Crescent Real Estate is redeveloping a 14-acre parcel at 2400 and 2450 Central Ave. into a combined structure that totals about 144,500 square feet. However, the developer is “exploring the possibility to reduce the square footage of the second level floor [by about 30,000 square feet] to allow higher interior clear heights for lab uses,” according to Boulder planning documents submitted earlier this year.

The developer is also considering enlarging an adjacent office building at 2300 Central Ave., but it’s unclear what the scope of that expansion may be.

The Central Avenue project is set to begin this year and has a 15-month development timeline, according to Boulder planning documents.

Southern Land Co.’s The Reve development at 30th and Pearl streets includes 120,000 square feet of office space. The developer recently sold off the residential portion of The Reve and is close to completing the commercial aspect. Tenants have yet to be announced.

This year, city leaders approved redevelopment plans at the Macy’s Inc. (NYSE: M) Twenty Ninth Street shopping area location, which will transform the department store into a three-story, roughly 155,000-square-foot office building. That project is expected to take several years to complete, and no tenant has been identified.

Apple is by no means the only big tech company with a growing presence in Boulder.

Amazon set up shop downtown at 1900 15th St. in 2018. Those offices were leased to house advertising-focused engineers.

About a year ago, Google expanded its Boulder operation with additional offices and employees at its 3333 Walnut St. facility, leasing the entirety of the nearly 160,000-square-foot facility.

The company also completed the third building at its 300,000-square-foot main campus at 2930 Pearl St. That campus was designed to house 1,500 employees.

That added to Twitter’s 30,000-square-foot lease in the Wencel Building south of the Pearl Street Mall, where it houses an app development team.

While local economic-development leaders are hailing Apple’s expansion as a win for Boulder, some in the community have been less enthusiastic about the city’s emergence as a hub for big tech.

The addition of more workers without a corresponding addition of homes exacerbates Boulder’s jobs-housing imbalance, some critics have said. And because Apple’s new employees will likely be highly compensated, they could make it even more difficult for lower wage workers to afford housing.