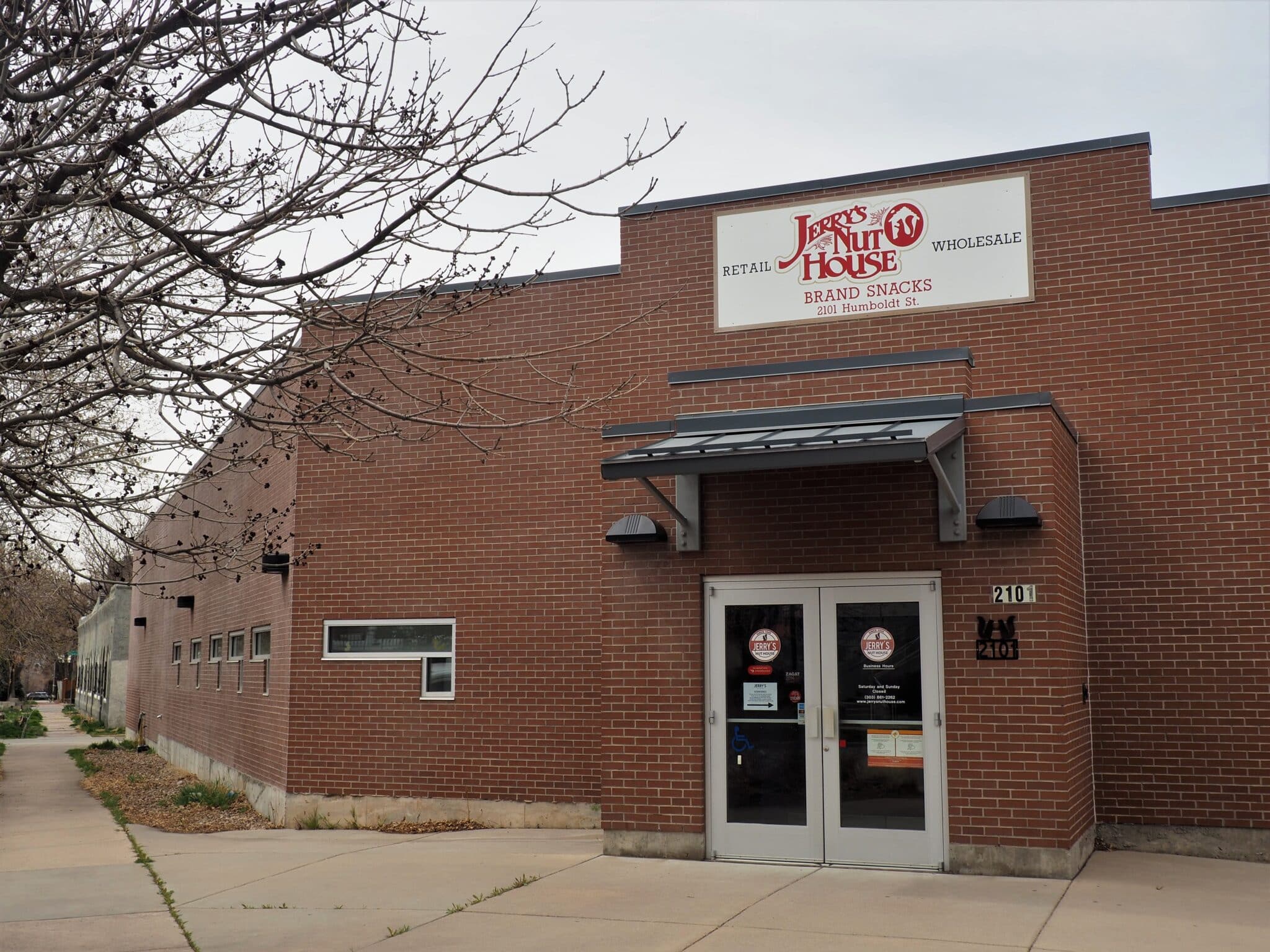 Jerry’s Nut House at 2101 N. Humboldt St. The owner plans to scale the business back into about half the property and add an Ace Hardware in the remaining space. (Thomas Gounley photo)

The owner of a generations-old City Park West business is looking to bring a hardware store to the neighborhood.

Jerry’s Nut House owner Stephen Julia, the grandson of the man who opened the nut and snack packer and distributor in 1948, wants to keep the legacy business at 2101 N. Humboldt St., but says that Jerry’s is occupying more space than it needs.

Scaling Jerry’s back to about half of the building’s roughly 28,400 square feet of space, as Julia hopes to do, would create plenty of space for another venture. The Julia family has settled on working to add an Ace Hardware in that location.

“I’ve been looking to scale Jerry’s back for a long time,” Julia told BusinessDen Tuesday. “It’s too much space for us. There’s a big retail store built out, a large office we never made full use of, and then we never got the retail traction from the store for what we do. I don’t think it was the right fit. And that’s a significant portion of the space — the other part was production, and we’ve changed some things around there, scaling that back, too.”

Before he can bring Ace to the space, Julia needs approval from the City Council to rezone the property. His rezoning application was before a council committee Tuesday morning and was forwarded unanimously and without objection to the full council.

“My wife and I always enjoyed Ace, and decided to see if that was an option,” Julia said. “We love it’s a co-op and we can run the store how we want to as independent operators but with the infrastructure of Ace behind it.”

Julia said the national chain’s neighborhood feel and the independence offered to store owners were big parts of what drew his family — his parents still co-own Jerry’s with him — to Ace specifically.

“No franchise fee, no secret shopping, it’s just a support structure,” he said. “I can even put my Jerry’s Nut House products in the queue line. They encourage that, even. I currently own and operate a local business, obviously, and I want to have another. That’s just the feel I want.”

Julia said the neighborhood has been largely supportive of the effort.

“I live nearby, and it’s hard to get to other places to pick up something like (Ace offers),” Julia said. “People have to go all the way to 9th Avenue to the other Ace or to other parts of town, like all the way to Stapleton for the Home Depot.”

Julia said he estimates the Ace taking up a bit less than 10,000 square feet and the smaller version of Jerry’s to take up about 11,000.

“Jerry’s has been in the family since 1948,” Julia said. “I’ve been operating it for more than 10 years for my folks, and I know they don’t want to see Jerry’s go away. Neither do I. This seemed like a logical step to make sure we can make money and secure it for the future.”

Jerry’s Nut House, Julia said, is a mainly wholesale nuts and snacks packer that also has a retail arm. He said he’s had as many as 20 employees at Jerry’s during the holiday season, though since the onset of the pandemic he’s gotten down to around eight.

“We’re going to need to expand further again, and I’d like to hover around 15 to 20,” Julia said. “Ace, I haven’t finalized exact hours, and I don’t know for sure, but I’m estimating around 40 employees.”

Timing on the changes is pretty hard to nail down, Julia said, given uncertainty around the rezoning and more. He said he hoped to have Ace in and Jerry’s scaled back by the end of this year, but that early next year was a possibility.

Jerry’s Nut House at 2101 N. Humboldt St. The owner plans to scale the business back into about half the property and add an Ace Hardware in the remaining space. (Thomas Gounley photo)

Jerry’s Hut House has more space than it needs at 2101 N. Humboldt St. in City Park West, and another business to share costs would secure its future.