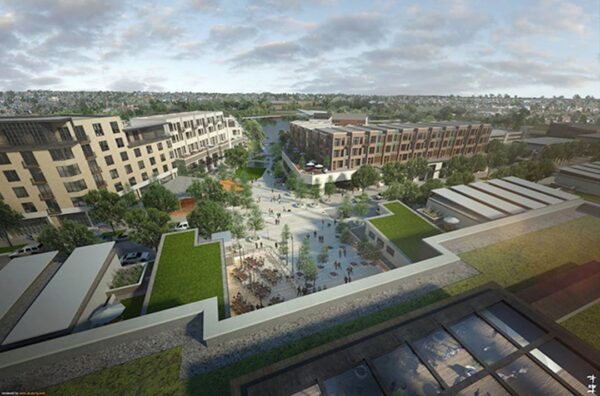 A plan to redevelop the area around a long-shuttered grocery store in Broomfield into a mixed-use space is underway and could break ground as early as next year.

Broomfield’s Planning and Zoning Commission recommended this week the establishment of a new urban renewal area at the roughly 43-acre site located north of West 120th Avenue, east of Main Street, west of Spader Way and south of DesCombes Drive. Such a designation would “provide important services to the area, attract private investment, provide for the orderly development of the area, and leverage public investment and funding mechanisms to provide necessary public infrastructure to serve the area,” according to a city memo.

The project, known as Broomfield Town Square, would wrap around the former Safeway, which closed in 2014.

Plans call for the construction of an enlarged Community Park Pond, “extensive plaza and walking areas including outdoor dining, entertainment areas, and public art, approximately 50,000 square feet of retail and restaurant uses, a 100-room inn [and] approximately 365 dwelling units including opportunities for affordable housing,” according to city documents.

“I think this is a good project. I’m glad to see it being brought forward and started — it’s a good thing for Broomfield, something that’s going to be very beneficial,” Thomas Silvers, planning and zoning commissioner, said during this week’s urban renewal area plan hearing.

A planned unit development and full development plan are being reviewed by Broomfield staff and expected to be presented to city officials and the public this year.

Most of the land is owned by the city, and will be developed in a public-private partnership with Milender White Construction.