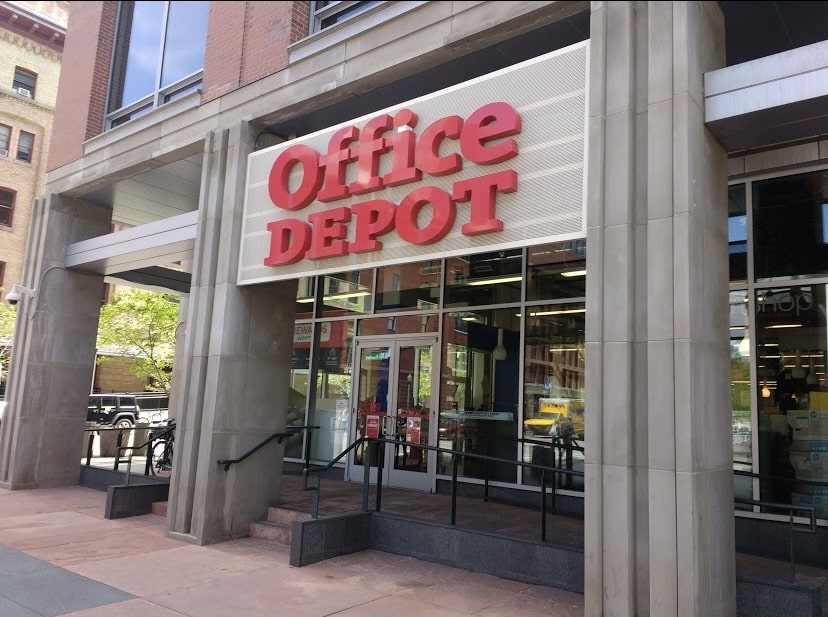 Office Depot’s downtown location will be closing on May 15. (Courtesy of Office Depot)

The office supplies retailer, which also owns OfficeMax, is planning to close three stores around the area by May, according to store employees.

Office Depot’s small-format downtown store at 1585 Wynkoop St. near Union Station will be shuttered May 15, a store employee told BusinessDen. It opened in 2012, according to Denver Post coverage at the time.

The national retailer will also be closing its location in Belcaro Shopping Center at 705 S. Colorado Blvd. and its CityCenter location in Englewood at 895 W. Hampden Ave. in May, according to store employees there.

The ODP Corp., Office Depot’s parent company, did not respond to a request for comment.

In May, the company announced in SEC filings that it planned to cut 13,100 jobs and close an undisclosed number of retail stores by the end of 2023 in an effort to curb costs and focus on its IT services business units. The ODP Corp. said it expected the restructuring to yield up to $860 million in net savings.

And in its 2019 third-quarter earnings report, the Boca Raton-based office supplier said it expected to close 90 stores in 2020 and 2021. CFO Joe Lower told investors at a conference in June 2019 that the company’s retail operations could represent less than 20 percent of the company’s sales within the next three years.

Staples sent a letter to Office Depot’s board of directors in January, offering to buy “100% of the issued and outstanding common stock” from its rival. The deal would have been worth more than $2 billion, but Office Depot rejected it in its own letter. Office Depot said it would be willing to consider a joint venture, where both companies “would equally share the risks and benefits.”

The Federal Trade Commission already blocked the companies’ attempts to merge in 1997 and 2016, according to coverage from The American Genius.

Office Depot’s downtown location will be closing on May 15. (Courtesy of Office Depot)