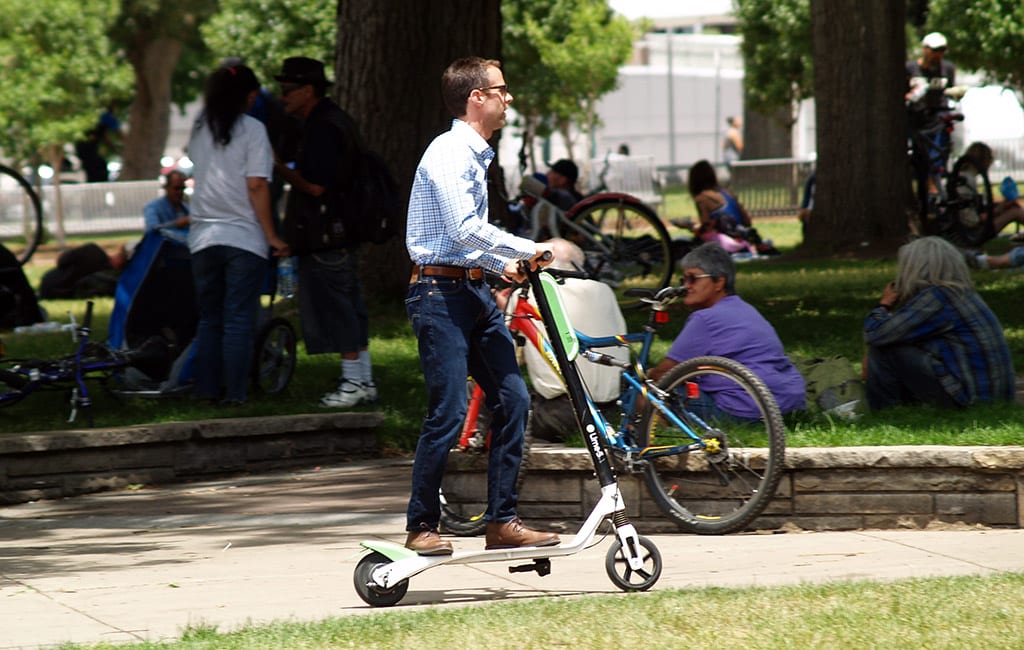 A plan to cut the number of companies that can place electric scooters and bikes around Denver to two has come under scrutiny by some City Council members — mainly because the city wouldn’t be paid.

Since 2018, companies that put pay-as-you-go, app-based electric scooters and bicycles along city streets and sidewalks have been part of a “pilot program” run by the city and include Bird, Lime, Lyft, Razor and Spin.

Now, the city’s Department of Transportation and Infrastructure is looking at a new approach to the “micromobility” industry. On Tuesday, members of a City Council committee were briefed on the department’s plan, which would allow just Lime and Lyft to continue operating.

The two companies were selected following a request for proposals.

The committee asked department officials to come back next week to further respond to questions, including concerns of creating what Councilwoman Candi CdeBaca referred to as a “duopoly” in the market.

“Have we quantified the dollar value of what we’re gaining in comparison to what they’re gaining?” CdeBaca asked, referencing the potential licensees. “We’re allowing unencumbered access to public right of way for free.”

“I’m concerned, really concerned, that we’re going to back ourselves into a situation where anytime someone wants a contract, they’re expecting to get the right of way for free,” she said. “They’ll promise a lot of things. But I’m afraid we’re going to be in a hole where two years from now we’ll not get the equity outcomes you’d hoped for.”

While Lime and Lyft would not pay the city in exchange for their licenses to operate, they have made a number of concessions and promises to the city to both conform to concerns of city leadership and help further a number of equity-related city goals.

“Why two?” Williams said at the meeting. “Why not one? Why not more than two? As we wrote the RFP to allow one or multiple, for flexibility, and asked to propose as a sole or one of multiple companies, we reviewed that and looked at what other cities are doing. Two is the appropriate number. Two maximizes leverage we have with these entities and lets us extract value.”

Among the agreements’ highlights:

Not discussed at length at the meeting was the issue of motorized scooter and bicycle safety.

Williams mentioned the commitment of the potential licensees to provide public outreach to enhance safety education. Early in the pilot program, accidents and their severe resulting injuries were a significant concern, especially after a scooter fatality in August 2019.

Heather Burke, a spokeswoman for DOTI, said in an email that the department didn’t envision the licensing program as likely to increase scooter-related injuries, noting the city passed an ordinance in 2019 creating stricter rules about where scooters can be ridden.

A “geofencing” system that was referenced in the presentation Tuesday does cut power to the vehicles if a rider takes them into unapproved spaces, like the 16th Street Mall, Williams said, but he pointed out the technology isn’t at the point that it can do that when a rider gets on a sidewalk, which is prohibited by ordinance.

Sandoval added another concern. Both companies, while nominally promoting an alternative to fossil fuel-powered, single-occupancy vehicles, are backed by companies that have invested exponentially more capital into their automobile-based side of the business.

“They have billions of dollars in cars, and this (scooter and bike division) is like a baby company,” Sandoval said. “As a business model, the car share is huge. Why wouldn’t they start pushing toward cars? Right of way is a sacred space. So, to give that way, this concerns me.”

Williams said the city had negotiated “to the limit” of what it could get from the companies in compensation for the exclusivity and access.

BusinessDen asked for copies of the proposals from each company that submitted a bid for a license, but was told those would be released — if requested under the Colorado Open Records Act — only after the licenses were executed.

The committee will discuss the matter further March 30 before voting on whether to forward the resolutions to the council to consider as a whole.

City staff want to cut the number of operators from five to two, but some council members are “nervous” about the agreements.