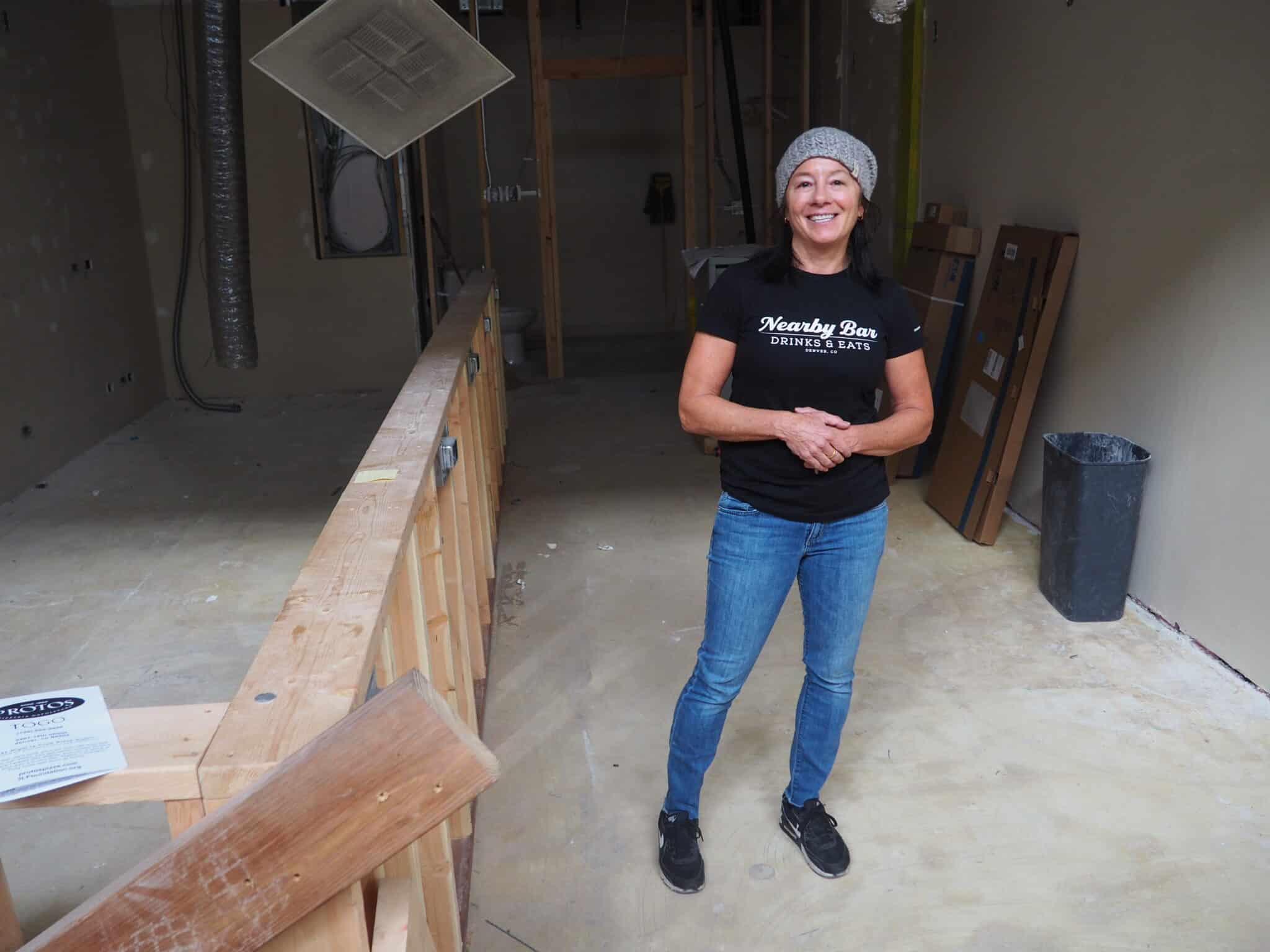 Pam Proto, owner of Nearby Bar Drinks and Eats, stands amid construction on the bar as its interior is being built on March 12. (Thomas Gounley photos)

A new watering hole is coming to LoHi this spring, and its owner couldn’t be more excited.

Pam Proto knows the corner of 15th and Platte streets — she’s been operating her Denver Proto’s Pizzeria Napoletana there for 17 years now. But the pizza restaurateur, who owns six Proto’s shops in the Denver and Boulder areas, has long wanted to change things up a little.

Proto decided to keep it simple and go old school.

“I’ve done pizza for a long time, and I’ve always said, someday I just want to have a bar,” Proto told BusinessDen. “Just an old-school bar where you come, hang out, doesn’t matter who you are, what you do, just come. The space became available last year next to my Denver Proto’s, and I jumped on it.”

Proto laughed as she described the space she’s opening her new bar, dubbed Nearby Bar Drinks and Eats. It’s directly adjacent to the Proto’s Pizza at 2401 15th St.

“It’s the tiniest place you’ve ever seen,” she said with a joyful cackle. “We’re hoping to open first week of May.”

The bar, kitchen and bathroom will occupy a space listed on permits at 665 square feet.

Old school won’t only describe the feel of the diminutive space, Proto said. That ethos will also be represented in the decor.

“We’ll have a cool inside, paying homage to that neighborhood and what it was back at the turn of the century,” Proto said. “It was really still a red-light district, so brothels, derelicts. We’ll pay homage to that on the inside.” 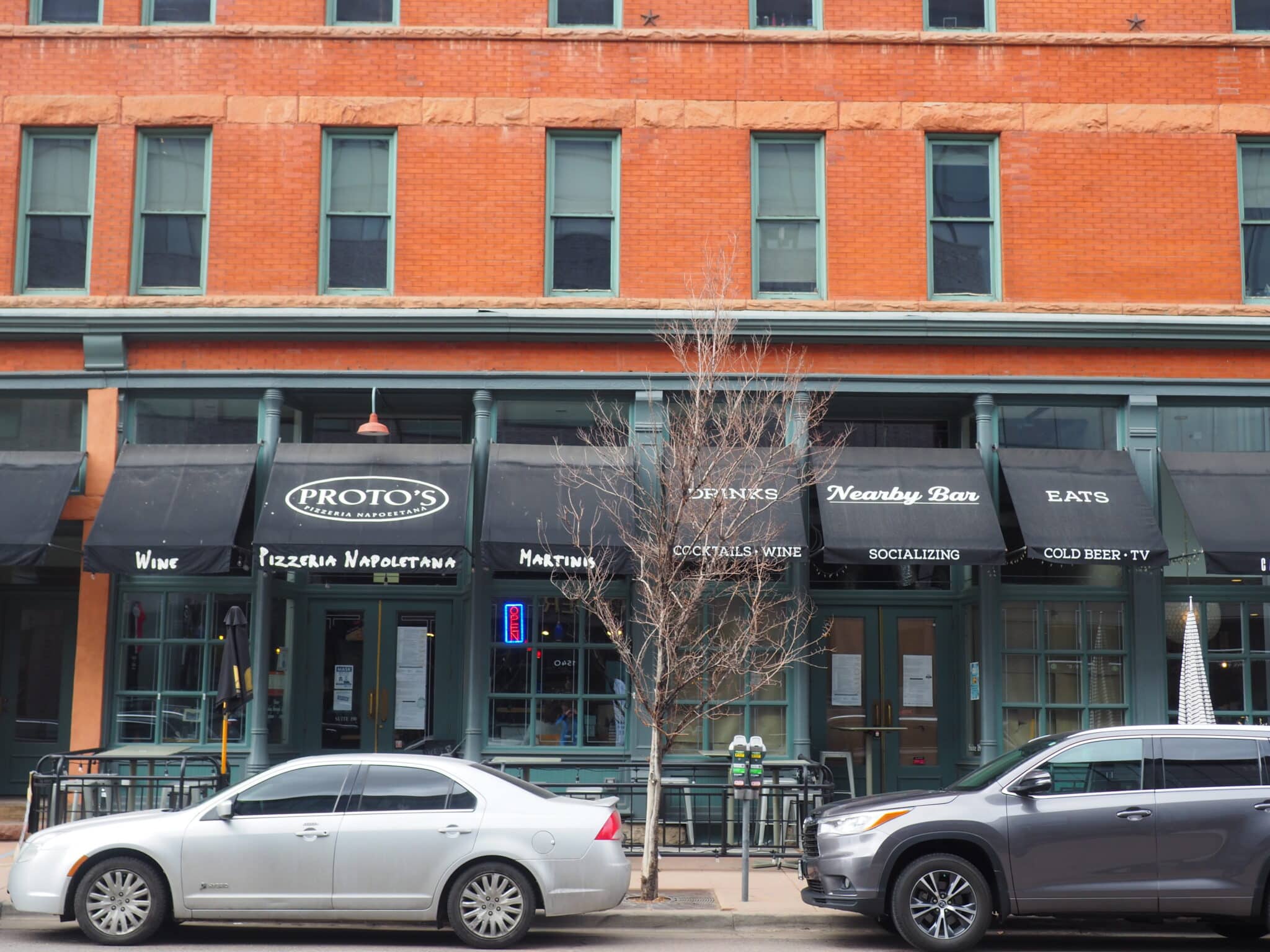 The awning for the in-progress Nearby Bar Drinks and Eats stands to the right of the awning of its owner’s other establishment on Platte Street near the corner of 15th Street, Proto’s Pizzeria Napoletana.

With simple food from a small kitchen in the back — Proto plans on roast beef sandwiches, Italian grinders and the like — as well as access to the larger menu of the pizzeria next door, Proto said this feels like a dream come true.

“I can’t tell you how excited I am,” she said. “I knew someday that perfect space would arrive, and here it is.”

The name, Nearby Bar, is intended to capture the spirit of simplicity with which Proto hopes to imbue the spot, she said.

“You’re in the neighborhood, where should we go?” Proto said, supposing a conversation between friends or coworkers looking for a spot to relax in LoHi. “Let’s go to Nearby Bar. Where? No, to Nearby. Haha, it’s right there. Right nearby.”

Proto said she envisions Nearby Bar filling a gap in the neighborhood that’s existed since the closure of, well, a nearby bar some time ago.

“The Monkey Bar, I loved that place,” Proto said. “But it was redeveloped. There’s just not a bar, and I want this bar to be for anybody — anybody — to come get a drink. I don’t care who you are.”

The former pet food store has been gutted and is on track for its intended spring opening, Proto said. But it was quite the journey to get to this point.

“When the city closed down, oh the permit took forever,” Proto said. “But honestly, it’s been a blessing in disguise. If everything had gone according to plan with the city, we’d have opened five months ago in the middle of a pandemic and that would’ve been a disaster.”

Proto said that her loyal staff at the pizzerias hunkered down over the last year of pandemic-induced strife, never closing entirely for business for even a day, but shifting nimbly to take out-all the time. It was hard, she said, but she’s proud of her crew. Now, she said, she’s ready for some good news.

“I pray we’re really coming out of this,” she said. “It was really hard. But we did it, and only because I have incredible people working for me and great customers.”

Pam Proto, owner of Nearby Bar Drinks and Eats, stands amid construction on the bar as its interior is being built on March 12. (Thomas Gounley photos)