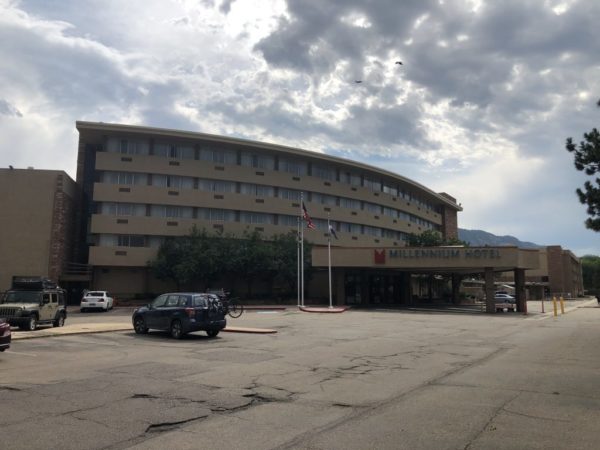 The Millennium Harvest House Hotel could be redeveloped into student housing. Christopher Wood/BizWest.

University of Colorado students could soon have a new housing option near the school’s Boulder campus, while travelers to the city may have one less hotel from which to choose.

The hotel, which sits on nearly 16-acres a stone’s throw east of CU’s Folsom Field, was developed in 1959 with several additions and renovations in the years since.

Landmark plans to demolish the hotel and replace it with four, three-story buildings. Those buildings would house 262 apartments, retail space and amenities spread across nearly 418,000-square-feet.

Of those apartments, 194 would be four-bedroom units popular among college students. The remaining units would be studios, one-, two- and three-bedroom apartments.

“A key component of this project includes restoration of creek riparian areas, as well significant improvements along the creek to create both passive and active recreation areas for both the residents of the project as well as the general public,” planning documents show. “The Boulder Creek Path will be significantly enhanced and amenitized to create a sense of place for this vital link of the entire Boulder multi-use path network.”

In a memo to city officials, Landmark representatives wrote that they “recognize that this is a large redevelopment project within the city on a prominent site,” but “believe [the redevelopment project] will greatly support multiple city of Boulder initiatives such as housing, access to open space, mobility, and sustainability.”

“It’s such a beautiful site, and it’s so centrally located in proximity to other hotels and the university,” she said. “I’d hate to lose that site for a hotel. … We never like losing hotel inventory.”

It’s not just hotel rooms the city would be losing, but also prime conference space, she added.

The operators of Millennium House “have been approached over the years about upgrading the property, but that always seemed to get stalled,” Mahoney said.

According to Mahoney, the decision to explore redeveloping the hotel is likely not a result of the COVID-19 pandemic’s impact on the hospitality industry.

“I think [the redevelopment plans are part of] a much longer term conversation,” she said.

In fact, Boulder’s hospitality sector is well on its way to post-pandemic rebound.

While business conference travelers may not return en mass until 2022, Mahoney said she expects tourists are already planning summer trips to Boulder.

Landmark is no stranger to development projects at prominent Front Range universities. In 2019, the company finished construction on The Standard at Fort Collins, a 232-unit student-centric complex near Colorado State University.

The Millennium Harvest House Hotel could be redeveloped into student housing. Christopher Wood/BizWest.