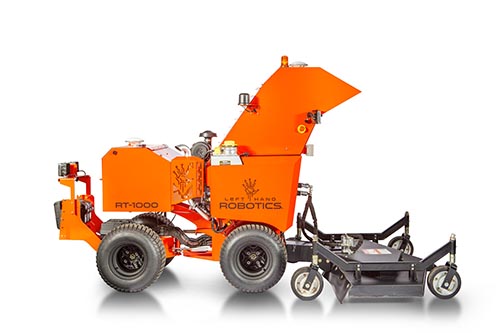 Left Hand Robotics Inc., a Longmont startup that has developed an autonomous snow-plowing robot, was recently acquired for an undisclosed sum by The Toro Co. (NYSE: TTC), the Minnesota-based lawn-mower manufacturer announced Tuesday.

“The acquisition supports The Toro Co.’s strategy of leadership in next generation technologies, including alternative power, smart connected, and autonomous products,” the company said in a news release.

In 2018, Left Hand began selling its SnowBot Pro, which the company said can complete the work of 14 shovelers in the same amount of time.

The robot is GPS-controlled and connected to the cloud. It follows a pre-programmed path unassisted to clear sidewalks and bike paths. The system includes LIDAR and RADAR sensors that detect obstacles and allow SnowBot to drive itself safely. Onboard cameras automatically take before and after pictures included in post-action job reports, and monitoring systems allow an operator to monitor the SnowBot in real-time from the Web or a mobile device. SnowBot can pre-treat walks ahead of a storm and apply solid or liquid deicer immediately after clearing snow.

The firm, according to its website, also makes the RT-1000 Tractor that can autonomously mow grass and clear snow.

Left Hand raised more than $7 million over several fundraising rounds in 2018 and 2019 to develop its products.

It is unclear whether Left Hand Robotics will be absorbed into Toro’s existing operations or if the company will operate as a subsidiary. Toro has not yet responded to questions from BizWest about the transaction.

Left Hand Robotics Inc., a Longmont startup that has developed an autonomous snow-plowing robot, was recently acquired for an undisclosed sum by The Toro Co., the Minnesota-based lawn-mower manufacturer announced Tuesday.