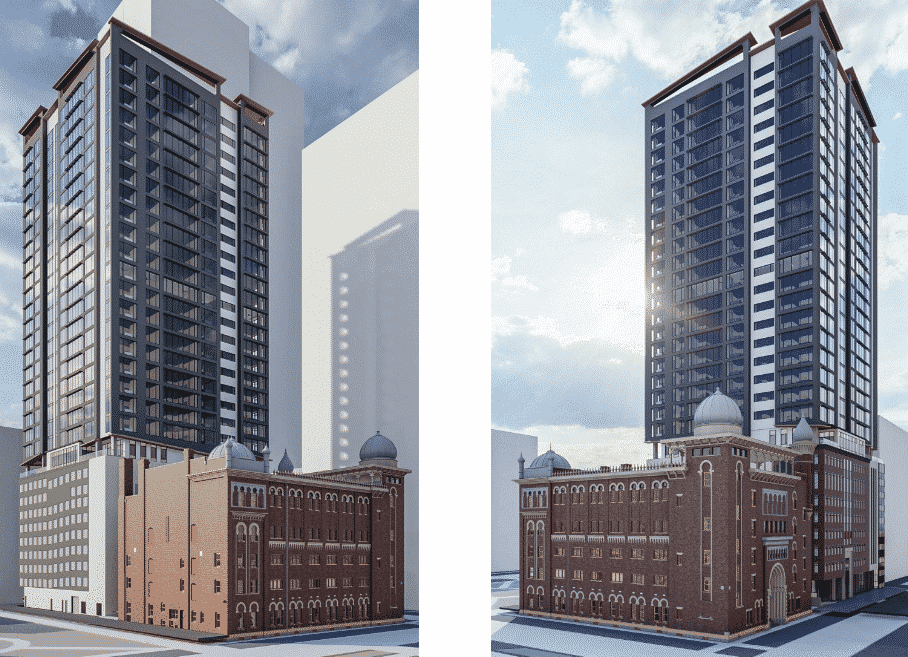 A pair of renderings showing the proposed tower next to the El Jebel Shrine. (Public records)

A new development proposal has been submitted for the parking lot next to El Jebel Shrine in Uptown, a site with a history of grandiose proposals that haven’t panned out.

The plans, submitted earlier this month, call for a 30-story condominium building to be constructed at 1750 Sherman St., just south of the Shriners’ former temple that dates to 1906.

The parking lot has been eyed by multiple developers over the past 20 years, including Donald Trump a decade before he became president. But nothing has ever broken ground.

The former temple and parking lot are owned by Denver Temple LLC, an entity that lists a Virginia address. A related entity, DMPT LP, purchased the site for $12.4 million in April 2016, records show.

The latest set of plans were submitted to the city of Denver by an architect with DLW Architects, out of Florida. Reached Monday, the architect said he was unable to comment.

David Roos, who is affiliated with the entity that owns the temple and lot, did not respond to requests for comment Monday.

The proposed 30-story structure, referred to in the documents as “Sherman Tower,” would have 120 condo units. All would be relatively large — two to three bedrooms, and at least 1,550 square feet, according to the plans.

There would be six units per floor, from floors 10 through 29, the plans show. The top floor would be mechanical space. The first floor would feature a lobby and some retail space. Floors two through seven would be devoted to parking, with utility space on floor eight and amenities on floor nine. Floor plates would be about 15,000 square feet.

The temple structure itself would be unaffected by the proposed building. The parking lot it would be built on is 17,213 square feet, or 0.4 acres.

The submission this month is actually the second early-stage development proposal to be submitted for the lot since the 2016 sale. A previous version called for a 61-story structure that would house both apartments and a hotel. 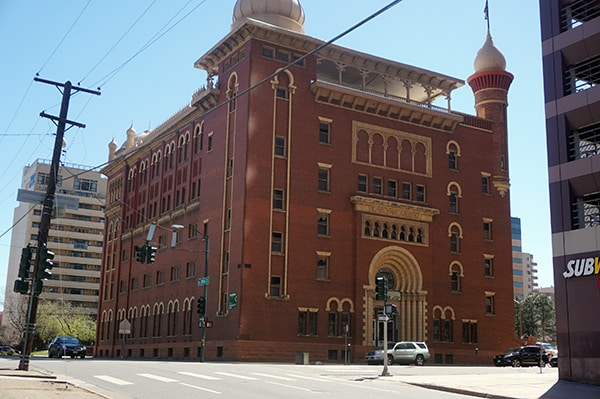 The Shriners built the Sherman Street temple between 1906 and 1907, according to a late 1990s document nominating it for inclusion on the National Register of Historic Places.

“When built, the El Jebel structure was the largest Shriner mosque in the country and one of the first built as a separate home for the order,” the document reads. “The total cost of the project came in at just under $190,000.”

Martin Wohnlich and Wes Becker bought the temple and the adjacent parking lot for $3.9 million in 2000. The following year, the Denver Post reported that the pair hoped to build a 50-story tower on the site, with both office space and condos. Their idea was to use revenue from the skyscraper to preserve the temple, which then would be rented out as a for-profit event space.

Wohnlich and Becker also shopped the development proposal around to other real estate firms. A group led by Donald Trump and New York-based Bayrock Group looked at the property in the mid-2000s, and put it under contract for $22 million, according to previous reporting by the Colorado Real Estate Journal. They wanted to build 51 stories of hotel rooms and luxury condos.

After that deal fell through, Denver-based firm Barrons Development took a run at the site with plans to build a 54-story tower, the Rocky Mountain News reported in 2006. Barrons was unable to close that deal by a November 2006 deadline, the paper reported.

A pair of renderings showing the proposed tower next to the El Jebel Shrine. (Public records)

Donald Trump once wanted to develop the site, which has a history of grandiose proposals that haven’t panned out.