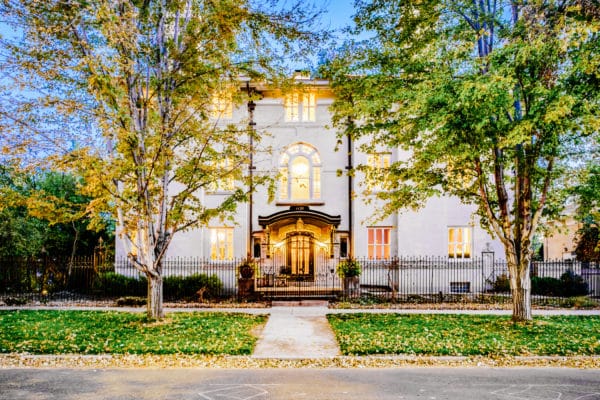 This mansion at 1130 E. 7th Ave. on the edge of the Country Club neighborhood was built in 1907. (Photos courtesy of Milehimodern)

The owners of a Centennial-based pet food store hope to have homebuyers’ tails wagging for their mansion at the edge of the Country Club neighborhood.

Jeff Strauss and Dan Remus, who own Wag N’ Wash Natural Pet Food & Grooming, relisted their 12,108-square-foot home at 1130 E. 7th Ave. last week, for $5 million. The couple originally listed it for the same price in October, but decided to wait until the holidays were over, listing agent David Bell told BusinessDen.

The property was commissioned by Denver businessman Chester Morey as a wedding present for his daughter in 1907 and designed by architectural firm Fisher & Fisher, according to the listing.

“This home is so recognizable to Denver,” Bell said. “I grew up here and remember driving by it as a kid, wondering who lived there and dying to see the inside.” 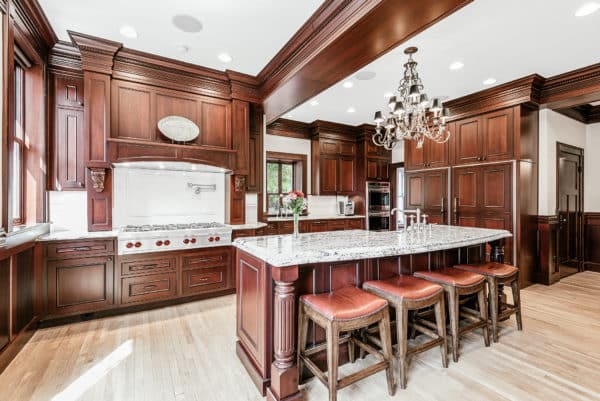 Owners Jeff Strauss and Dan Remus added a chef’s kitchen during a renovation.

Strauss and Remus previously purchased the property for $1.73 million in 2007, according to property records. They spent almost the same amount — nearly $1.8 million — renovating the space once they moved in, Bell said.

The couple moved into the property’s 1,000-square-foot carriage house while the home was gutted and updated with features such as a gourmet kitchen, billiard room, wine cellar and spa-like bathrooms. 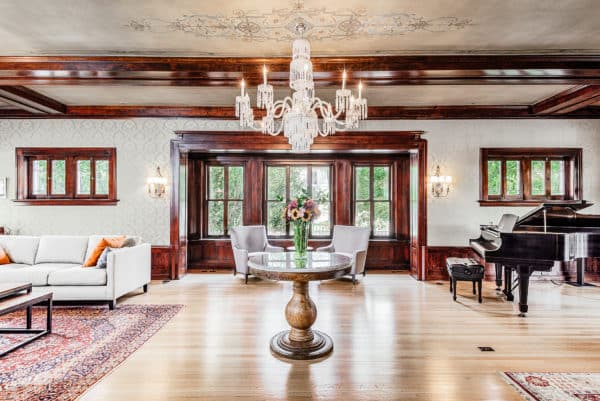 The sellers installed a Schonbeck chandelier, which was created using old photos to resemble the original one.

Strauss and Remuss also made sure to embrace the home’s original character with meticulous details, including recreating its original silk fabric wallpaper and even installing a $45,000 Schonbeck chandelier, which was created using old photos to resemble the original one.

“This was their baby, and they’ve lived there for a little over 13 years,” Bell said. “Now, they want a new project.”

Stats: Sitting on around 0.36 acres, this four-story grandeur mansion houses six bedrooms and 11 bathrooms, plus a 3,500-square-foot basement with a 12-seat movie theater, wine cellar, spa and gym.

“Strauss and Remus dug an 8-foot trench around the whole exterior and painted the brick with thick rubber coating to keep the moisture out of the basement,” Bell said. “They also lowered the level of ground to put in windows, so you don’t really feel like you’re underground.”

The finer things: Inside, a double-staircase entryway greets visitors and flows into a formal living room crowned by the French chandelier and coffered ceilings, according to the listing. A retrofitted elevator takes you to all four floors, and upstairs, the master suite features a wet bar, fireplace, sunroom and en-suite bath.

Outside, there’s a three-car detached garage, an in-ground swimming pool and a carriage house with a full bath and kitchen.

This mansion at 1130 E. 7th Ave. on the edge of the Country Club neighborhood was built in 1907. (Photos courtesy of Milehimodern)

The 12,108-square-foot home was commissioned by Denver businessman Chester Morey as a wedding present for his daughter in 1907.