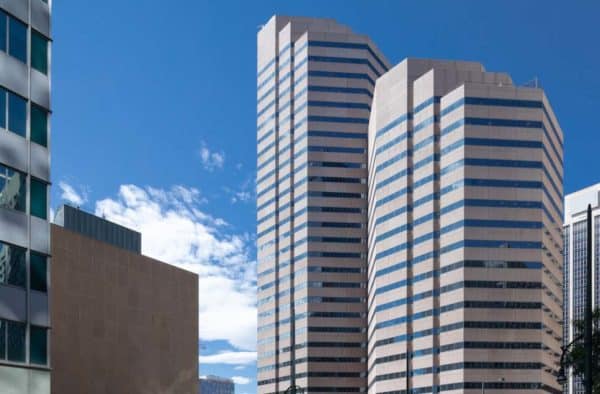 The former Gardenswartz and Dodds firm listed an office at 600 17th St.

For the second time since 2016, Denver accountant H. Wayne Gardenswartz has been sued for fraud by a former partner claiming they were stiffed.

Donald Prosser was promised reimbursement for Broncos tickets, membership dues to Cherry Creek Country Club and a $150,000-a-year salary as part of his compensation to work at Gardenswartz & Associates, according to a lawsuit filed in Denver District Court earlier this month.

But instead, Prosser lent the business around $100,000, which he struggled to get paid back, he alleges. And the reimbursement for the Broncos tickets and country club dues never came.

“The defendants refused to honor and perform on their promises to Mr. Prosser and instead stonewalled him, while Gardenswartz bilked tens of thousands of dollars out of the back door of (Gardenswartz & Associates) to fund his own lavish lifestyle,” the eight-page lawsuit claims.

Prosser, who has been a CPA since 1977 and now works at Hanson and Co., joined Gardenswartz in 2016, merging his practice into Gardenswartz’s. He quit in November 2018.

According to the complaint, Prosser began loaning Gardenswartz money to cover the bills in 2017 “under the guise that business was down,” while his partner treated the practice as a “personal bank account.”

By January 2018, Prosser had loaned Gardenswartz $94,000 plus interest and, according to the lawsuit, Gardenswartz continued to ask for more.

“Gardenswartz was routinely taking money out of (Gardenswartz & Associates) to fund his lavish lifestyle, paying high monthly mortgage payments on several homes, including his second home in Scottsdale, Arizona, paying high country club bills, and the list could go on,” the lawsuit claims.

He established his business in 1994, according to the Secretary of State’s Office, and continues to operate under Gardenswartz & Associates. The company’s LinkedIn profile reports it has fewer than 10 employees.

This is the second time in five years that one of Gardenswartz’s partners sued him after leaving the firm. After working his way up in the practice, Brian Dodds was made a partner in 2009, taking a 5 percent stake in the practice, according to legal documents. When Gardenswartz solicited money from Dodds in January 2016, Dodds discovered a broken budget that stretched back years.

According to Dodds’ lawsuit, Gardenswartz loaned himself $3.2 million from his own business, while missing employee payroll and making late payments to employee retirement plans and the health insurance plan.

Gardenswartz never filed a formal response to Dodds’ complaint in court. In a July 2016 motion requesting a hearing be rescheduled, Gardenswartz’s attorney, Jason Astle of Springer & Steinberg, countered that “at the heart of (Dodds) allegations, though, are speculative claims about how the accounting of the firm’s books were handled. What Dodds also admits, however, is that as a director, he never met his own fiduciary duty to review the books to ensure that they were properly kept.”

Dodds and Gardenswartz settled out of court in October 2016. Before the end of the year, Gardenswartz sued Dodds, claiming he had violated his confidentiality agreement by telling clients Gardenswartz had committed “borderline fraud.”

A district judge dismissed the case in October 2017 after the two parties reached a settlement.

After learning of litigation between Gardenswartz and Dodds, Prosser realized his own promised business perks were part of “a deliberate scheme Gardenswartz had used with his prior CPA practice partner,” the Jan. 6 lawsuit claims. “Certified Public Accountants have ethical duties prohibiting Gardenswartz from doing what he did to Mr. Prosser.”

“Gardenswartz knew what he was doing, he had employed the same tactics and scheme with his prior CPA practice partner,” the lawsuit claims. “Gardenswartz’s conduct constitutes fraud, malice, or willful and wanton conduct that caused Mr. Prosser damages and which should be punished.”

The former Gardenswartz and Dodds firm listed an office at 600 17th St.

For the second time since 2016, a Denver accountant has been sued for fraud by a former partner claiming they were stiffed.