JLL has filled out its retail department. 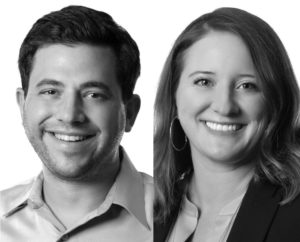 Adam Rubenstein and Sarah Alfano, most recently at Crosbie Real Estate Group, started at JLL last month. On the retail side, they join Sam Zaitz, Jeff Feldman and Lorenzo Harris, who joined the firm in February.

“We realized what we were lacking here was a team that was a specialist on shopping center leasing,” he said.

Zaitz typically focuses on mixed-use projects in hot Denver neighborhoods. Rubenstein and Alfano will focus on grocery-anchored centers, often in the suburbs. The Kroenke Group and Kimco Realty, two of the country’s largest retail landlords, are among their clients locally.

Alfano had been at Crosbie since 2013, and Rubenstein since 2016, often working together.

Rachel Smith is a broker associate with Re/Max Masters Millennium.

Katherine Howland is a staff accountant. She is a graduate of the University of West Florida.

Nikolai Wehse is an acquisitions analyst. He is a graduate of Colorado University.

Rob Unger is a real estate advisor. He is a graduate of Drake University.

Andrew Aye has been named Colorado market president for U.S. Bank. He had been with BOK Financial.

JLL has filled out its retail department.

JLL has filled out its retail department with Adam Rubenstein and Sarah Alfano, plus other local hires and promotions in real estate, law and finance.