Fluid Truck, which launched in Denver in 2018, is available in 10 other markets across the country. (Photos courtesy of Fluid Truck)

Despite the pandemic, Denver-based Fluid Truck just keeps truckin’ along.

The peer-to-peer truck rental platform, which took on its current form in 2018, expanded beyond Denver for the first time this year.

“There’s a transformation in the economy where people are overwhelmingly looking to shift their brick-and-mortar model to delivery and e-commerce, and we feel fortunate that we’ve been able to help out retailers pretty significantly with their ability to make their shift,” Eberhard said.

Fluid Truck’s platform offers 24/7 mobile access to a wide array of vehicles, none of which the company owns. Users can rent anything from a neighbor’s pickup truck to a Tesla online for an hourly, daily, weekly or monthly rate. Businesses have the option to rent a full fleet without overhead or just a few extra vehicles during peak season.

The majority of vehicle rentals on the app range from $5 to $10 an hour or $20 to $49 per day, plus additional per mile charges for trucks. A calendar in the app lets users know what’s available when. Lockboxes allow easy access to the cars, and money is handled over the app.

Owners set the pricing and can also set weight and mileage limits, as well as limits on what the vehicle can be used for. Long bed pickup trucks can generate owners up to $800 a month, and moving trucks can earn them up to $3,000 a month, Eberhard said. Fluid Truck earns its profit by taking a 20 percent cut of what users pay. 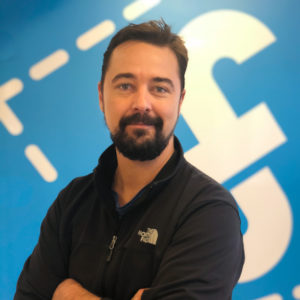 “Utilization, or the number of hours across the day that our trucks are being used, is up 15 percent since the pandemic,” Eberhard said. “We have some businesses that will book a vehicle Monday through Friday from 8 a.m. to 5 p.m., and then we’ll have other businesses that book it out from 6 p.m. on a Friday night all the way till Sunday night. Other people will rent a truck just to go to Home Depot and back for a few hours. It varies.”

More than 400 businesses around Denver are using Fluid Truck, and the CEO said the app has seen an uptick in restaurant and brick-and-mortar users since the pandemic. The startup also has long term partnerships with traditional delivery companies, such as FedEx, DHL and OnTrac to help them work through their supply chains in times like these when package counts and usage are dramatically up.

“Typically, our vehicles are used across a number of different businesses,” Eberhard said. “Every vehicle usually ends up servicing two and a half businesses on average, which means it’s more cost-effective, easier to access and easier for them to scale up and scale down. In peak periods, you’re worried about not having enough and during slow periods, you don’t need a big fleet sitting around. We’re trying to solve that problem for businesses.”

“We mainly service small, mid-type businesses and enable them to have an on-demand fleet,” he said. “So, when we look at a lot of their means, it’s usually package delivery. Those routes are less than 100 miles a day, so if you have an EV vehicle, that means you reduce a stop out of your daily driving because you don’t need to stop for gas. EV commercial vehicles will definitely be a big part of the future, and it’s great to give our users the chance to test them out.”

Eberhard originally created an app called Fluid Market, which allowed users to rent out everything from ladders to paddleboards to Teslas when it launched in 2016. But when he realized users’ rental items, with the exception of vehicles, weren’t making them much money, he decided to narrow down his idea and relaunch the app as Fluid Truck in 2018.

Fluid Truck, which launched in Denver in 2018, is available in 10 other markets across the country. (Photos courtesy of Fluid Truck)