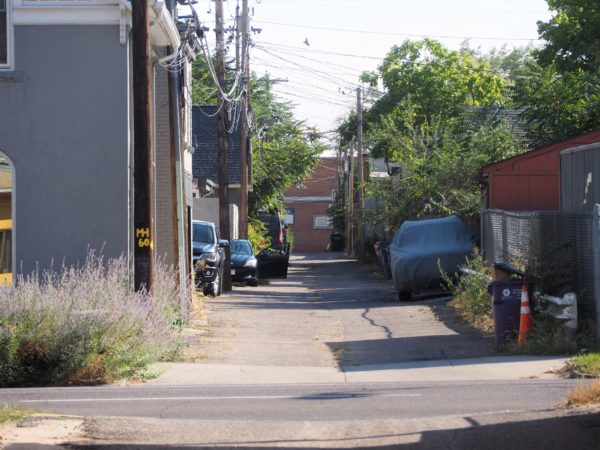 Alleys like this one in central Denver are considered prime for accessory dwelling units. (Photo by Thomas Gounley)

The city’s approach to accessory dwelling units may get a little less piecemeal.

The Denver City Council is considering a rezoning measure that would essentially allow ADUs to be built throughout Chaffee Park, a neighborhood in the city’s northwestern corner.

The structures, typically intended for one or two people, are sometimes referred to as “granny flats” because they can keep an aging family member close at hand. ADUs are also sometimes rented out through sites like Airbnb, an arrangement that complies with Denver’s primary residence requirement for short-term rentals.

“This is the first time an entire neighborhood has been rezoned to allow accessory dwelling units,” Councilwoman Amanda Sandoval, who is sponsoring the measure, said at a Tuesday council committee meeting. 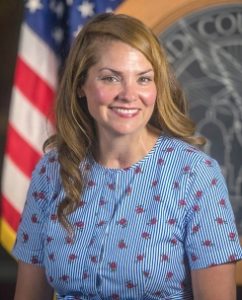 ADUs are legal in about 25 percent of Denver. Up to this point, however, outside that area, property owners wanting to build one have had to pay a $1,000 filing fee and ask the city to rezone their specific parcel.

“Having individual homeowners go through this process, as we’ve seen before, is just something they shouldn’t have to go through,” Councilman Chris Herndon said.

The rezoning being considered would apply to all single-unit residential lots that are at least 4,500 square feet in size in Chaffee Park, which is north of Interstate 70 between Kalamath Street and Federal Boulevard. About 1,400 parcels meet that description.

The measure could just be the start. Council members Amanda Sawyer and Chris Herndon said they’re exploring the possibility of doing the same thing in the East Colfax neighborhood.

Sandoval said that a neighborhood organization suggested the possibility shortly after she was elected last year.

Neighborhood residents were contacted starting in September 2019. Sandoval said that of 387 respondents to a survey, 66 percent were in favor of the measure and 16 were against with the rest unsure. At a Planning Board meeting, the stage where rezoning requests are first considered, 10 speakers were in favor and two were against.

Proponents say the measure would bring more relatively-low-cost housing to the city, as well as allow property owners to generate additional income. Those who have contacted the council in opposition to the measure, meanwhile, have expressed concerns about parking, changes to neighborhood character and negative ramifications stemming from using ADUs for Airbnb.

Sandoval said Chaffee Park has plenty of on-street parking. Most survey respondents weren’t planning to immediately build an ADU if the rezoning is approved, she said. And many who want to do so would use it for family members.

She also said the measure could improve the feel of some parts of the neighborhood.

“I believe that the more active we have our alleys, the better they are,” she said. “Usually, the cleaner they are and the less unwanted activities happen in them when we have eyes on them.”

The City Council’s Land Use, Transportation and Infrastructure Committee unanimously forwarded the measure to the full council on Tuesday. A public hearing and final vote could take place Nov. 9.

Alleys like this one in central Denver are considered prime for accessory dwelling units. (Photo by Thomas Gounley)

Accessory dwelling units are already legal in some parts of the city, but otherwise, property owners wanting to build one have to ask the city to rezone their specific parcel.