The mansion at 162 Cherry St. was built in 2006. (Photos courtesy of Kentwood Real Estate)

The glass Hilltop home of the late Denver art collector and philanthropist Ginny Williams sold for $1 million less than its original asking price.

The 6,658-square-foot home, which hit the market in June, sold for $3.5 million in early September to Christopher and Erin Smith, according to public records. It was originally listed for $4.5 million.

The custom-built home was completed in 2006 and designed by New York architect Michael Gabellini. Located at 162 Cherry St., the distinctive glass house sits next to Cranmer Park.

Williams died in September 2019 at 92. The home was sold by her trust.

Williams moved to Denver in the 1950s with her husband, Carl, who passed away in 2015. Together, they became pioneers of the cable industry, which essentially originated in the metro area, and made their fortune. 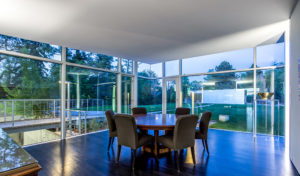 She opened the Ginny Williams Gallery in Denver in the 1980s with the intention to create a contemporary art museum, but that never came to fruition, and it is now home to the Ginny Williams Family Foundation. Williams was a large donor to the Denver Art Museum and during her lifetime served on the boards of the Guggenheim Museum and the Hirshhorn Museum and Sculpture Garden in Washington, D.C.

In June, 450 pieces from Williams’ collection sold for more than $59 million. They were originally meant for her contemporary art museum that never opened.

Stats: The three-bedroom, four-bathroom home sits on more than half an acre and has 4,700 square feet of open space above ground, plus a nearly 1,900-square-foot finished basement.

The finer things: Williams’ former home has sprawling walls meant for large artwork. The modern interiors feature a wide-open living area and study surrounded by top-to-bottom windows with views of the mountains, according to the listing.

“The location of this property is truly one of the best in the city,” listing agent Gina Lorenzen previously said. “It sits on one of the highest points in the city and the views of the Front Range are unsurpassed.”

The property features three gas fireplaces, a chef’s kitchen, dark stained wood floors and a glass staircase. It’s also has a three-car garage, a recreational room and a large backyard for entertaining.

The mansion at 162 Cherry St. was built in 2006. (Photos courtesy of Kentwood Real Estate)

The 6,658-square-foot home owned by the late art collector and philanthropist next to Cranmer Park was purchased from her trust for $3.5 million.