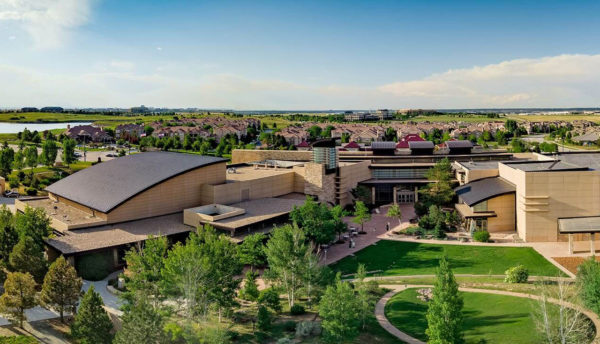 The CU South Denver facility is in Douglas County. Courtesy of University of Colorado.

The University of Colorado System plans to shutter and sell its CU South Denver campus in Douglas County, which it was gifted in 2015.

The university system posted about the decision on its website Thursday, saying that “after going through several due diligence assessments, CU leadership determined the facility is not financially viable.”

“Even before the pandemic, businesses in the area increasingly were moving to training and programming at their own sites rather than send employees to CU South Denver,” the post read. “Additionally, the facility’s 150,000-square-foot space configuration has proven to be challenging for higher education academic use.”

The university system said it expects to soon issue a request for proposals for a broker who would market the property. It noted the state has a contract with JLL for such services.

The campus, at 10035 S. Peoria St. in Lone Tree, is about 13 acres and has one large structure and green space on it, along with an expansive parking lot. It was originally home to The Wildlife Experience, a museum and event space founded by Dave and Gail Liniger, founders of Re/Max.

CU began using some space at the site in 2014, and the Linigers donated the property to the university system the next year. At the time, the university system said the gift was worth $40 million and was its largest-ever real estate donation. The Wildlife Experience museum is still part of the facility.

About 300 students are enrolled in the facility’s four on-site academic programs, and will be able to continue classes at the site through at least August 2021, CU said.

In addition to classrooms, the campus is also home to startup operations for CU’s Office of Digital Education, which provides recruitment, marketing, student success and other support services to online programs across the CU system.

CU said that, over the next year, those employees who need office space will relocate to existing CU offices at 1800 Grant St. in Denver, as part of a broader revamp of space utilization in the building driven by increased remote working as a result of the pandemic.

CU South Denver won’t be the only Denver-area college campus for sale. Johnson & Wales University hired CBRE to market its Denver campus in the South Park Hill neighborhood, which will cease operations next summer. It’s a more traditional campus, with multiple structures — one dating to 1886 — on about 25 acres.

The CU South Denver facility is in Douglas County. Courtesy of University of Colorado.

The founders of Re/Max gifted the property to the university system in 2015, but CU said the “facility is not financially viable.”