Editor’s Note: A statement from In-N-Out has been added to the end of this story.

In-N-Out has found a spot within Denver city limits to dish up double-doubles.

An early-stage development proposal submitted to the city Tuesday calls for a 3,879-square-foot fast food restaurant on a 1.19-acre lot at the southwest corner of Central Park Boulevard and 46th Avenue, just north of Interstate 70.

It’s the eighth planned location along the Front Range that BusinessDen can confirm. None of the restaurants are open yet.

The documents received by the city don’t specifically name In-N-Out. But they were submitted by Greenwood Village-based Galloway & Co., which has previously submitted In-N-Out proposals to other Colorado municipalities. 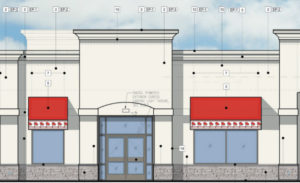 A rendering shows the building would have red awnings featuring small palm trees, a common feature of In-N-Out locations, and other clues make the connection clear.

In-N-Out and Galloway & Co. didn’t respond to separate requests for comment. The restaurant would have 84 indoor seats, and a drive-thru lane long enough to accommodate 29 cars, according to the plans.

The site is currently undeveloped. Tyler Carlson, managing principal of Denver-based Evergreen Devco Inc., said in an email that a joint venture consisting of his firm and Denver-based Wall Development is under contract to purchase the site of the proposed restaurant and surrounding land.

The broader project will be known as Runway 35 North. The companies are also under contract to buy a site at 40th and Central Park, to be developed into Runway 35 South.

“Unfortunately, at this time, we are unable to confirm the identities of any of our end users due to confidentiality obligations but what I can say is we’ve got an exciting mix of sit down and quick service restaurants, hospitality, entertainment, automotive, medical, and educational and institutional uses planned,” Carlson said.

Wall Development is also involved with the development of a planned In-N-Out location in Lakewood.

In-N-Out was founded in 1948 in a suburb of Los Angeles, and didn’t expand outside that metro area until 1990 when it opened its 56th location in San Diego. The company now has approximately 350 eateries in California, Nevada, Arizona, Utah, Oregon and Texas.

In-N-Out is building a distribution center in Colorado Springs to serve its restaurants in Colorado.

Here are locations in the state where the chain’s restaurants are known to be planned:

Castle Rock: The west parking lot of The Outlets at Castle Rock

Colorado Springs: The southeast corner of InterQuest and Voyager parkways

Colorado Springs: The site of a former Outback Steakhouse northeast of Powers Boulevard and Constitution Avenue

“We do hope to open a restaurant at 4535 N. Central Park Boulevard in the future. While it’s too early to know when, or even if, we will open a restaurant at this site, we are excited to be working on an additional location to serve Customers in the great state of Colorado.

Our construction work continues to move forward for our locations in Colorado Springs, Aurora, and Lone Tree. We are still on track to open our first three Colorado restaurants by the end of the year, and of course our distribution center will need to be operational by that time to support these locations.”

The burger chain, which is trying to keep its identity under wraps as it expands into Colorado, is planning eight restaurants along the Front Range.