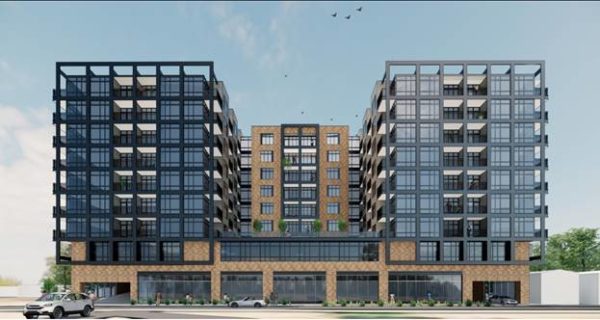 A rendering of the proposed project. (Courtesy Don Fitzmartin)

The founder of an Arvada-based aerospace products manufacturer is behind the latest development proposal in Denver’s Sun Valley neighborhood.

The concept plan, submitted earlier this month, calls for a nine-story apartment building at 2608 and 2638 W. 13th Ave. The project would be developed by Alicia Svaldi, who founded and still leads Faustson Tool, and other family members.

Plans call for the building, dubbed Mile High Studios, to have 166 units: 28 studios, 96 one bedrooms and 42 two bedrooms. There would be 143 parking spaces on the first and second floors.

The 0.65-acre site is located within an Opportunity Zone. The development team purchased it for $1.34 million between 2014 and 2019, according to public records.

Don Fitzmartin of Fitzmartin Consulting, who is representing the developers overseeing design and construction, said the building is intended to be “workforce housing.”

“Our goal is to comply with the requirements of HUD and evaluate the potential of income-restricted units,” he said.

Fitzmartin said the project has taken steps in the design process to make it possible to convert the parking area to more residential units in the future if the spaces become less needed. That includes making the building tall enough that there’s space to install a new raised floor in the parking area, to both level it off and allow for plumbing access, he said.

BOKA Powell is the project architect. A 2021 groundbreaking is targeted.

Fitzmartin noted that the Sun Valley neighborhood — which is bounded by the Platte River, Federal Boulevard, 6th Avenue and the Broncos stadium — has “great access” to downtown and major highways like Interstate 25.

The Denver Housing Authority is currently building along 10th Avenue in Sun Valley. The Colorado Department of Transportation moved into its new headquarters in the north part of the neighborhood last year. And plans to develop the parking lots south of Empower Field at Mile High, although still early in the planning process, have the potential to significantly alter the area’s feel. 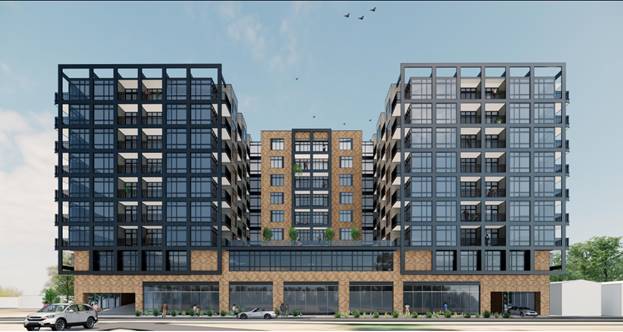 A rendering of the proposed project. (Courtesy Don Fitzmartin)

Mile High Studios, which would have 166 rental units, is slated for a 0.65-acre site on 13th Avenue.