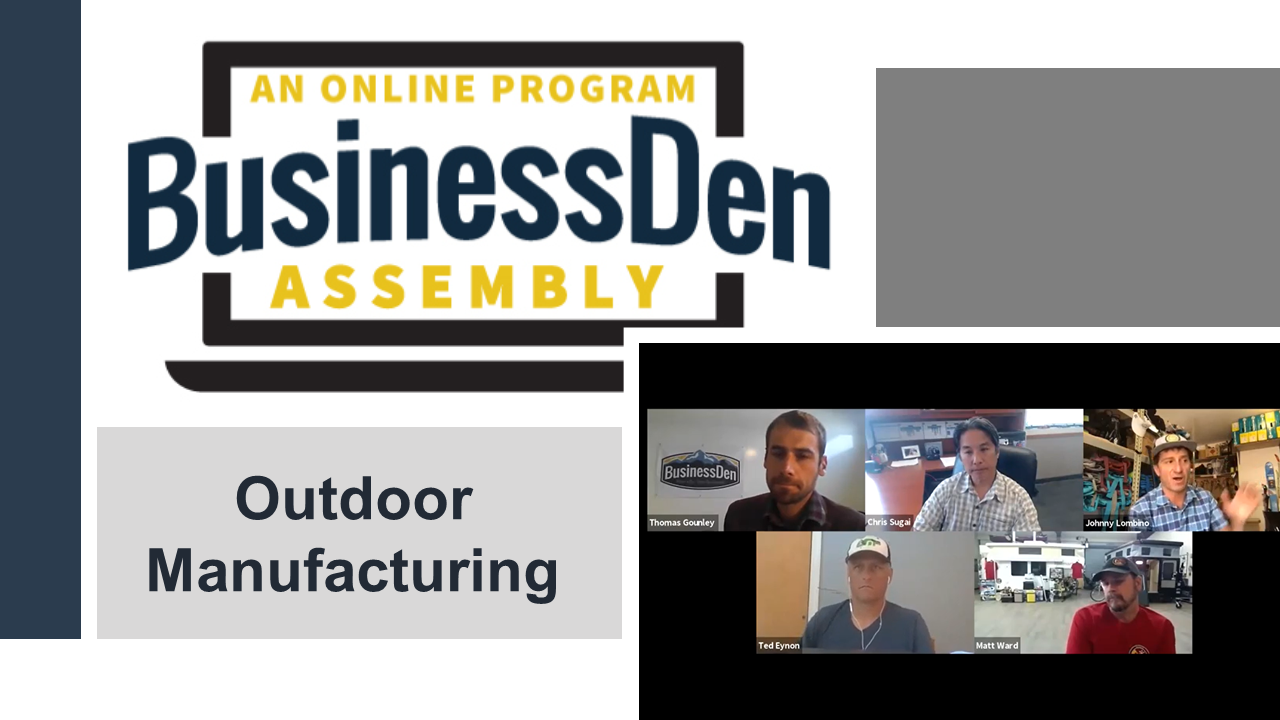 Outdoor gear is selling out as fast as Lysol wipes as more people turn to the great outdoors for entertainment during the COVID-19 pandemic.

“In early May we saw an influx of phone calls, emails and inquiries, and it didn’t stop,” said Johnny Lombino, founder and owner of Telluride-based SOL Paddle Boards.

He added, “By the time June came along, we had backlogs of 40 voicemails, a couple hundred emails a day coming in about our standup paddleboards … and in July, it was full steam ahead. We were selling out containers before they even arrived.”

Lombino was one of four panelists in the seventh BusinessDen Assembly, an online panel discussion exploring how local industries are navigating the pandemic.

Other panelists in the Thursday event, which focused on outdoor manufacturers around the state, were Chris Sugai, founder and co-owner of Niner Bikers in Fort Collins; Matt Ward, a third-generation co-owner of Hallmark RV in Fort Lupton; and Ted Eynon, CEO of Denver-based Meier Skis.

SOL Paddle Boards’ sales are up 50 to 60 percent this year, Lombino said.

He said the company has introduced innovations to its paddle boards that are also driving demand.

“Reception from customers has been incredible,” he said, adding that more retailers are now interested in adding a local line of paddle boards.

Because of delays in the supply chain, the company is struggling to keep up with the growing demand.

“We’re playing a game of catch up. But that being said, we’ve planned ahead for 2021 and have placed all of our orders,” Lombino said. “We’re trying to get ahead of this curve in case there is another spike, so our assembly lines are fully rolling right now.”

Ward agreed that getting supplies is currently the biggest challenge.
Hallmark RVs, which sells truck campers that range from $34,000 to $108,000, is on pace to beat its annual revenue figure of $5 million to $6 million from 150 vehicles sold.

“People are usually willing to wait six months for campers, but that’s not the case,” Ward said. “They want what they want today, so they make concessions and buy one of my showroom models. It’s been quite a ride so far.”

As for the future, Ward said, he is more concerned about the impact on RV sales by wildfires in California and across the West than he is about the pandemic.

“Until people feel comfortable flying, the RV industry will stay strong,” he said.

There has also been a renaissance in cycling across the U.S. because of the pandemic, Sugai said, and Niner Bikes saw its highest monthly revenue in the company’s history in July. He said sales have increased 30 to 40 percent across the board.

“We launched a line of e-bikes — which are a really growing trend — last month, so it was really good timing that this resurgence of cycling came about,” Sugai said.

He added, “With the increase in demand, we’re starting to see a slowdown in deliveries of our POs from our manufacturing, so putting back up plans in place has been front and center for our operations team.”

While skis aren’t quite in season yet and uncertainty continues to loom over antsy skier’s heads, Meier Skis has seen an uptick in pre-season sales. Orders have been up 100 percent since the Denver company, which usually sees modest numbers in the summer, launched a sale in May.

It’s gearing up for what it believes will be another big ski season, Eynon said, assuming there’s enough snow.

He said skiers already wear masks and gloves and the sport lends itself to social distancing.

“I think resorts have worked out a lot of COVID-related modifications this summer,” Eynon said. “There’s not going to be a big Apres-ski scene. But unless something drastically changes, ski season is going to happen. And I haven’t heard anyone say anything contrary.”