The two sides battling over the future of Carmen Court on Tuesday detailed their failed efforts to find a compromise during their first appearance before the Denver City Council.

Chris Crawford, managing director of Hines — the Houston-based developer under contract to buy the condo complex at 900 E. 1st Ave. — said the company was willing to walk away if a new buyer planning to preserve the structure wanted to take over the existing contract with the condo owners.

But no such buyer was found, according to Crawford, who indicated the arrangement would have also needed to ensure that Hines be “reimbursed for out of pocket expenses”

“We did have a discussion with a group that wanted to do a land swap,” he said. “That land swap did not work given the location of the other land.”

Hines wants to buy Carmen Court, which was built in 1925, so it can demolish it and build a five-story senior living complex on the property and a couple parcels to the south along Emerson Street. When the complex’s owners applied in March for a designation that would ensure future demolition was possible, some nearby residents responded by requesting it be named a city landmark. That designation would effectively prevent demolition.

This is the first owner-opposed landmark application since the council made changes last year intended to encourage compromise.

On Tuesday, the two sides detailed the failed attempts at compromise in response to questions from members of the council’s Land Use, Transportation and Infrastructure Committee.

The committee ultimately decides whether to send the landmark application to the full council for a final vote. It did not do that on Tuesday, however, because the meeting was running long. The committee will continue its discussion next week.

“Our office has been getting a lot of emails about this … We’re back to that one-year-ago Tom’s Diner conversation,” she said, referring to the landmark fight last year that ended with a compromise.

Denver city planner Kara Hahn made clear that city staff and the Landmark Preservation Board largely look at whether a property is eligible to become a city landmark, and whether an application is complete. It’s the job of the council to consider broader issues, such as what people consider their rights as private property owners.

“We have a very narrow scope,” she said. “You guys have a broader scope.”

The discussion by Hines and the landmark applicants indicated that both sides looked at the possibility of rezoning to allow Hines to build higher on part of the site, in exchange for preserving Carmen Court. But Crawford said that was impractical because Carmen Court sits on the back of its lot, and its parcel comprises most of the land the company is under contract to buy.

“The biggest issue here, truthfully, is that this is a tight site,” he said.

Malcolm Murray, one of the landmark applicants, said his group proposed allowing Hines to remove the rear wall of Carmen Court so it could build right up to the structure. And he said architects submitted multiple drawings of ways to make the project work.

Crawford, however, said those drawings didn’t take into account that the building would be a senior living complex, which has specific needs in terms of layout.

Details regarding the possible payout for the building’s current owners also came out Tuesday. 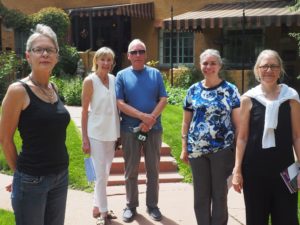 The owners of the units have said they listed the property for sale because the building was getting too expensive to maintain. They have also previously expressed concern about their property becoming less valuable if it were designated as historic.

On Tuesday, however, Murray said he cares less about the formal designation, and more about just seeing the building stay.

“We’re not insisting that designation take place as long as Carmen Court be reasonably preserved,” he said.

Information regarding the possible payout for the building’s current owners also came out Tuesday.