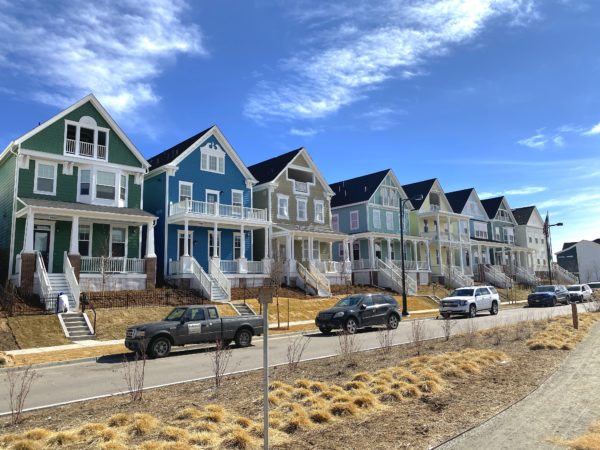 A row of homes in the Stapleton neighborhood. (BusinessDen file photo)

The east Denver neighborhood Stapleton will be renamed Central Park.

The final round had pitted Central Park against the alternative Skyview; Central Park received 63 percent of the vote. Prior to that was a round with four options, which also included Mosley and Concourse.

Stapleton already has a literal park known as Central Park. And Central Park Boulevard is a major road through the area.

Stapleton International Airport was named after the late Denver Mayor Benjamin Stapleton, who led the city from 1923 to 1931 and 1935 to 1947. Stapleton was a member of the Ku Klux Klan.

Stapleton’s KKK affiliation has led to multiple pushes in recent years to rename the neighborhood. Last year, a majority of property owners that make up the Stapleton Master Community Association voted to retain the Stapleton name.

In mid-June, however, the association’s leadership voted to proceed with a name change. The decision came amidst national protests over the death of George Floyd in Minneapolis. Denver protest leaders had signaled plans to begin protesting in Stapleton.

A row of homes in the Stapleton neighborhood. (BusinessDen file photo)

The moniker emerged as the top choice following several rounds of voting.