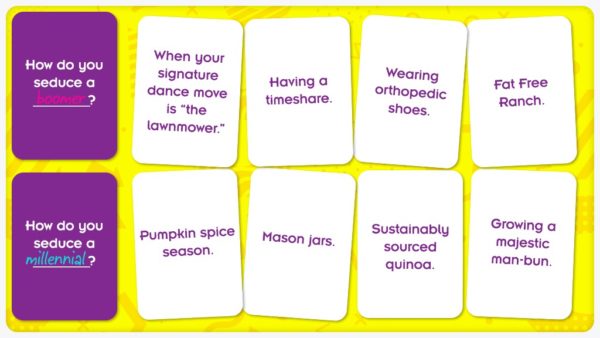 “Ok, Millennial” asks the players questions about boomers or millennials and it’s their job to find the funniest response. (Photos courtesy OK, Millennial)

“OK, boomer” has become a millennial mantra to mock the older generation, but a new card game born in Denver will give both age groups the chance to dish it out.

After too many awkward silences and uncomfortable moments during family game night, husband-and-wife Krystal and Tim Welland decided to create a party game that they could enjoy with their parents.

And so, “Ok, Millennial” was born— a party card game, similar to the format of “Cards Against Humanity,” in which players respond to questions about the millennial or baby boomer generations with funny stereotypes. 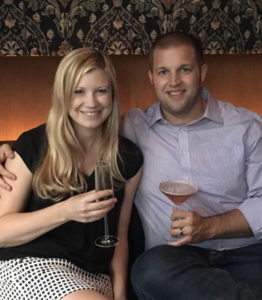 “It’s a great way to have people in our generation sit down with their family, and every time we play this game people are laughing until they cry because it hits home with everybody,” Krystal Welland said. “We see all these differences in our parents and vice versa, and it’s so fun to poke fun at each other and the differences in our generations.”

The Welland couple launched a Kickstarter campaign for the new party card game on June 26 to garner consumer interest and print their first batch of 2,500 games.

The game starts with a flip of a coin to see which generation, boomers or millennials, is on the hot seat first. There are 75 different question cards with inquiries like “What do ___________ think are hip?” and “What is a ______’s biggest turn-off?” Whichever generation the coin lands on will fill in the blank.

Each player holds seven response cards with generational stereotypes, such as, “A dog with a social media account” or “Having a landline.” There are 375 response cards overall. 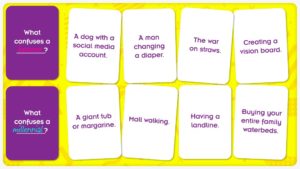 They choose the best card in their hand to respond to the question, and a rotating judge will pick the winner with the funniest card.

“Whenever we play with my parents, someone ends up telling some story about their childhood or some memory we have, and we kind of get to learn a little bit more about their generation and reminisce over things we forgot,” Welland said.

The Wellands, at 35 and 37, are both millennials. Tim works full time as a corporate secretary and development manager for Palisade Partners, a Denver-based real estate development firm, and Krystal has been on maternity leave from her part-time job as a statistician for Jackson Lewis, a New-York based law firm.

In January, they came up with the idea for the family-friendly game and created a spreadsheet to keep a running list of funny generational stereotypes.

“Every time I got off the phone with my mom, I had a new boomer joke,” Welland said.

The couple first created the game out of notecards, and invited friends and family over to test it out. Once they saw it was a hit, the game continued to grow. Along with their own experiences and family references, the Wellands included popular jokes from online memes, articles and Instagram posts.

“This is new for us; I work with numbers in a statistical consulting way, and Tim does financial work for real estate development, but enjoying a fun, low-key night with friends and family is important to us,” Welland said. “We really believe in this product and that it will make for a lot of unforgettable nights.”

The couple plan to retail “Ok, Millennial” for $20 on Amazon. They tapped a family friend to design the cards and will use Kickstarter funds to begin manufacturing the game overseas.

In the future, they hope to make expansion packs to include the GenX and GenZ age groups.

“Ok, Millennial” asks the players questions about boomers or millennials and it’s their job to find the funniest response. (Photos courtesy OK, Millennial)

“It’s so fun to poke fun at each other and the differences in our generations,” Krystal Welland said.