The city of Denver collected $3.04 million in tax revenue from those with a short-term rental license between Jan. 1 and the end of May, according to data provided by city departments.

Tax revenue for June stays was due Monday.

Eric Escudero, spokesman for the city’s Department of Excise and Licenses, told BusinessDen last week that there were 2,279 active licenses in the city. That’s down 296 licenses from March 19, when the fallout from the coronavirus was taking hold, and down 394, or 14.7 percent, from 2,673 one year ago.

Escudero said Host Compliance, a company that provides data to municipalities on short-term rentals to aid enforcement efforts, has found that the total number of short-term rental units in Denver — both licensed and unlicensed — has declined by 750, or 21 percent, from July 2019. But he said the total has increased some in recent weeks, from a low of 2,697 recorded June 25.

The company provided BusinessDen with the following data on what it considers the Denver market, which in addition to the area within city limits includes much of Lakewood and Thornton.

The data indicates that some entire homes have been taken off the site. There were 3,837 active home listings in March and 3,180 in June, according to AirDNA. 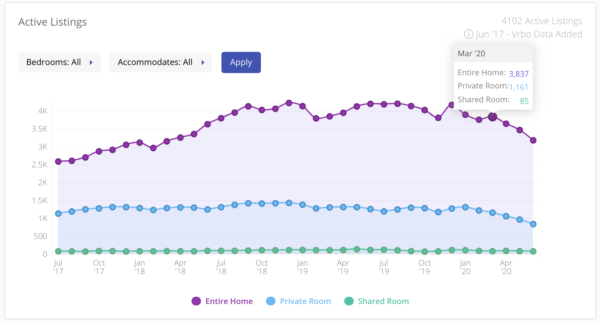 Bookings for the Denver market declined precipitously between mid-February and late March, but then rebounded — only to take a dip as July rolled around.

The bookings appear on the date they were made, not the date of the actual booking.