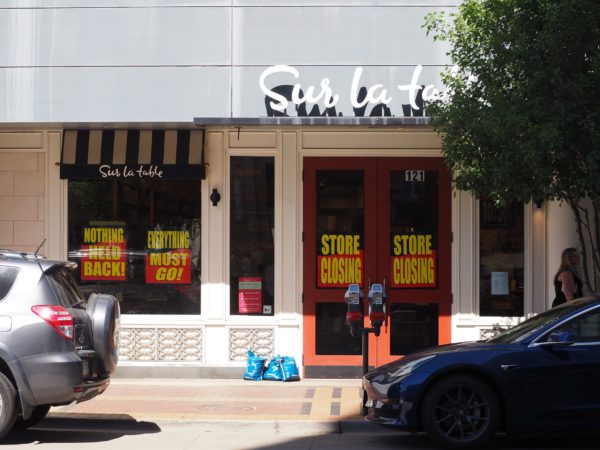 Kitchen supply retailer Sur La Table plans to close nearly half its stores, including locations in Cherry Creek and the Belmar section of Lakewood.

The Seattle-based company filed for Chapter 11 bankruptcy protection last week and disclosed plans to close 56 of its 121 stores, according to the Associated Press.

Five of the 56 stores already have closed. The other 51 stores slated to be shuttered are having liquidation sales.

In Cherry Creek, Sur La Table operates at 121 Clayton Lane. The company moved into 7,434 square feet there in 2012, after having previously operated within the Cherry Creek Shopping Center across the street.

Sur La Table’s store in Lakewood is at 343 S. Teller St. Both locations are expected to close in August or September, according to the company’s website.

Sur La Table has two Colorado locations that aren’t on the chopping block: in Boulder at 1850 29th St., and within The Streets at Southglenn in Centennial.

Bargain-hunters who head to the Cherry Creek location will notice another “store closing” sign across the street, at silk plant shop Silk & Co.