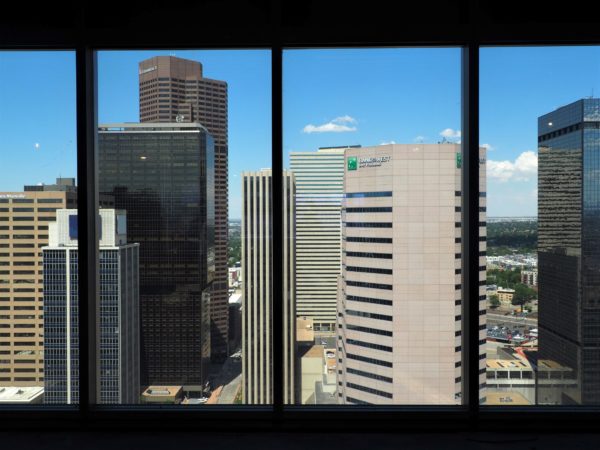 Looking east from Block 162’s 26th floor, the highest floor for which the glass curtain wall had been fully installed as of Tuesday. (Photos by Thomas Gounley)

Block 162 has topped out, and construction is still on schedule despite the pandemic.

The final beam was placed atop the structure last Wednesday. David Haltom, a vice president for Houston-based developer Patrinely, gave BusinessDen a tour of the 30-story office tower under construction at 675 15th St. on Tuesday.

The coronavirus has affected the worksite. Workers wear masks, and a construction elevator with an original capacity of 35 is now limited to 10 people at a time. But Haltom said the project benefited from the fact that it’s been underway for about two years, and much of the materials needed were at the site — or at least in the Denver region — by the time the pandemic arrived.

“If we had been earlier in the construction process, it could have really thrown our delivery for a loop,” he said.

One exception is marble for the building’s lobby, which still needs to be imported from Italy, which was one of the first Western countries to be hit hard by the virus. That has caused delays, but Patrinely still expects it to arrive in time to allow for a December completion. That’s the target it set in summer 2018 when it broke ground.

The pandemic has affected leasing activity, which Haltom said dried up in March, as Patrinely wanted to keep the worksite safe, and companies and brokers shifted to working from home amidst broad economic uncertainty.

But Haltom said tours have picked up in the last three weeks or so, although no leases have been signed.

Block 162 is the first skyscraper to be added in downtown Denver since Hines’ 40-story 1144 Fifteenth building, which was completed in 2018. Below are photos of the project, as well as details regarding the structure. 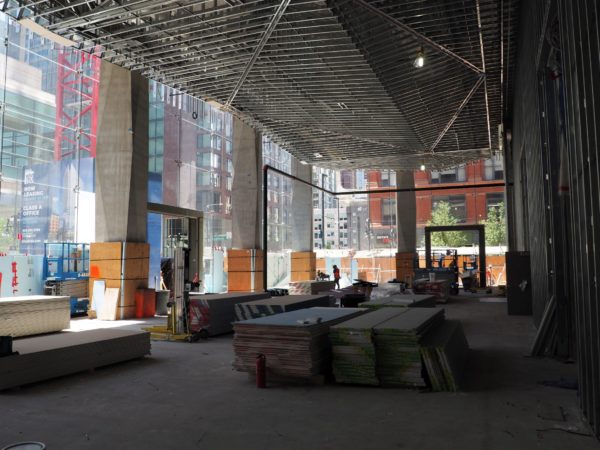 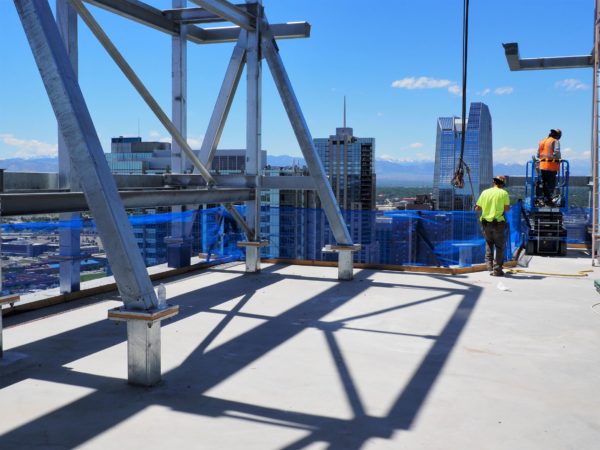 The view looking northwest from the roof of Block 162. 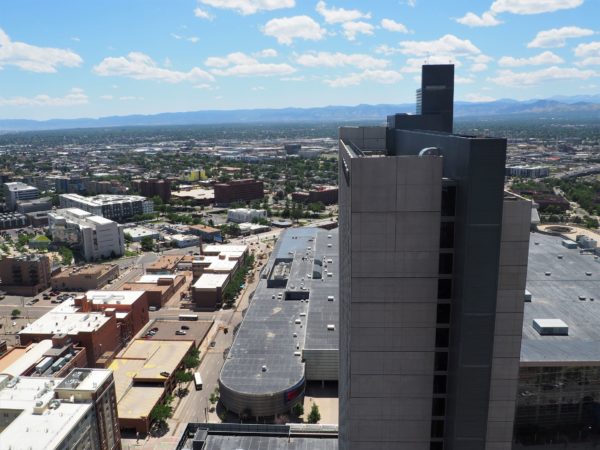 The view looking west from the 30th floor of Block 162. The building in the foreground is the Hyatt Regency hotel. 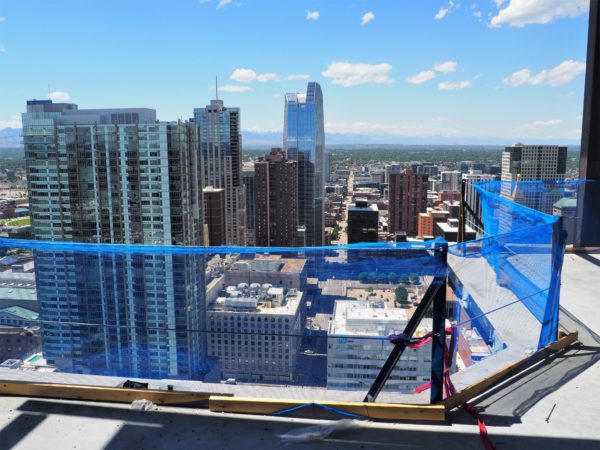 The view looking northwest from the 30th floor of Block 162. 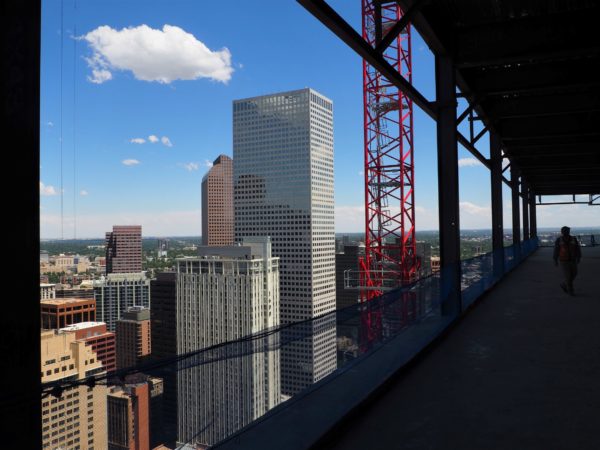 The view looking east from the 30th floor of Block 162. 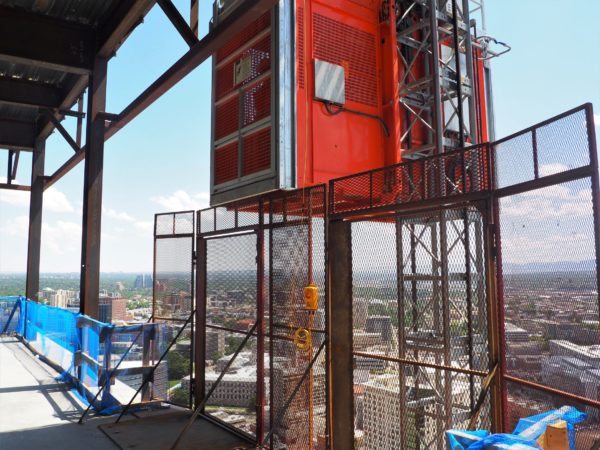 The construction elevator passes by the 30th floor of Block 162. 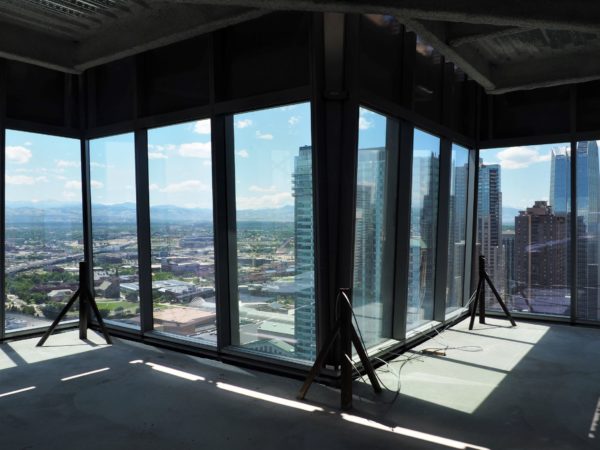 A view looking northwest from the 26th floor of Block 162. 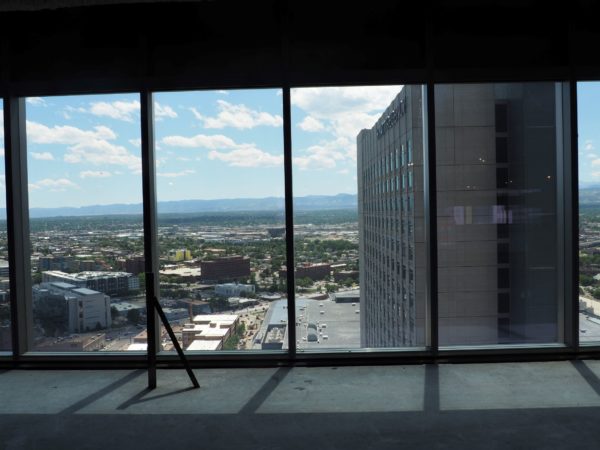 A view looking west from the 26th floor of Block 162, with the Hyatt Regency hotel in the foreground. 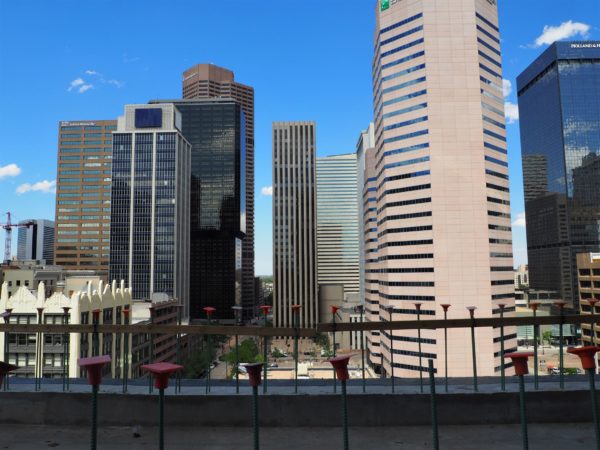 The view looking east from the building’s 11th-floor amenity deck. 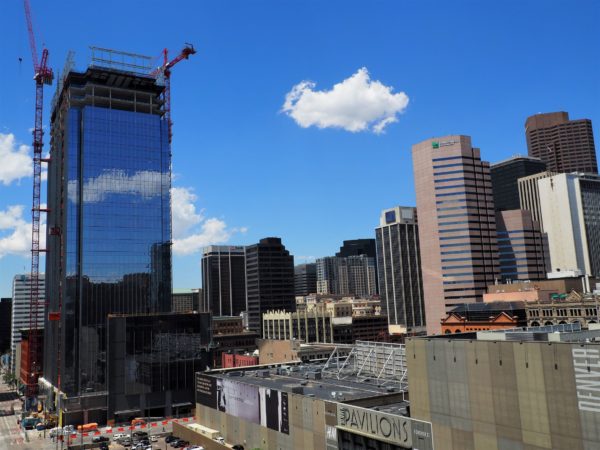 Specs: Block 162 will have about 9,000 square feet of retail space and a lobby on the ground floor. Offices will be on the 11th through 30th floors. Floor plates vary slightly but average 29,800 rentable square feet. The 11th floor also will house a fitness center, lounge and outdoor deck space. Parking will be on floors three through 10, as well as three below-ground levels, making for a ratio of 1.7 spaces for 1,000 rentable square feet.

The façade will be comprised of an all-glass curtainwall system. The project will be certified LEED Gold.

Looking east from Block 162’s 26th floor, the highest floor for which the glass curtain wall had been fully installed as of Tuesday. (Photos by Thomas Gounley)

Patrinely’s 30-story office tower at 675 15th St. has topped out and is expected to be completed in December.