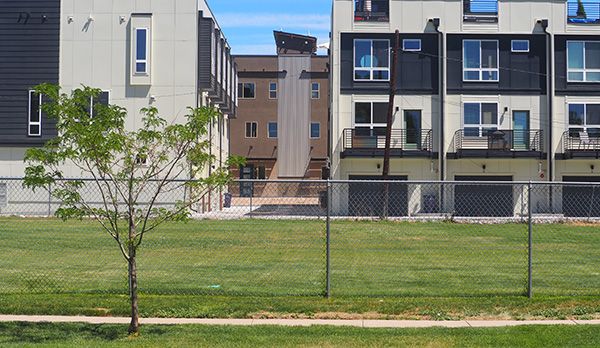 The Boys & Girls Clubs of Metro Denver wants to build its new headquarters on what is currently a soccer field. Photo by Thomas Gounley.

The Boys & Girls Clubs of Metro Denver wants to move its headquarters.

The nonprofit, which runs youth programming, currently has its central offices at 2017 W. 9th Ave., in an industrial section of Lincoln Park. It has asked the city to rezone the property at 3325 W. 16th Ave. so it can build a new two-story structure there.

That property, in the West Colfax neighborhood, is home to the Arthur E. Johnson Boys & Girls Club, which has operated since the 1960s. That building would remain standing. The new structure would go up on what is now a soccer field to the west.

“We would like to have our administrative facility right next door to an operating club,” Kim Davidson, a Boys & Girls Clubs staffer, told a Denver City Council committee on Tuesday.

The property is currently zoned G-MU-3. The requested new zoning is G-MX-3. The committee voted unanimously on Tuesday to send the request to the full council. A public hearing is tentatively scheduled for July 20.

Davidson said a move would help the organization with training new employees and attracting donors, because “they would be able to go next door and see in practice how the club is operating.”

“It’s also a great transportation corridor, so it would help us attract new employees because it would be easier for them to get to work with some of the public transportation that is available in that area,” he said.

A city staffer said the city received eight comments opposing the rezoning, and one supporting it. Most of those in opposition expressed concern about parking, while some objected to the height that would be allowed by the zoning.

Davidson told council members the new building would have parking on the property, so it wouldn’t “substantially” eat up street parking spaces.

The Boys & Girls Clubs of Metro Denver, led by CEO Erin Porteous, oversees 20 neighborhood clubs and a summer sleepaway camp, according to a recent press release. The nonprofit reported revenue of $18.5 million in 2018, according to tax filings.

The Boys & Girls Clubs of Metro Denver wants to build its new headquarters on what is currently a soccer field. Photo by Thomas Gounley.

“We would like to have our administrative facility right next door to an operating club,” a nonprofit staffer told a council committee.